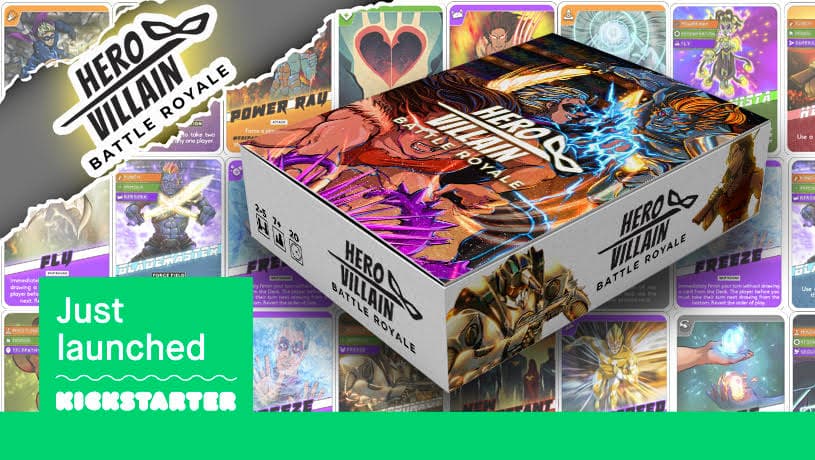 Hosted Game Hero or Villain: Battle Royale will be a card game!

Hosted Games is proud to share that Hero or Villain: Battle Royale may be coming to a tabletop near you soon, in the form of a card game! Hosted Games author @adrao has just launched a Kickstarter to create what would be the first card game version of a ChoiceScript game.

To celebrate the launch of the Kickstarter, @adrao’s games are on sale starting today! Get these on sale now!

Here’s a few words from Adrao:

My name is Adrao and for years I have been writing interactive fiction using ChoiceScript, including Hero or Villain: Genesis, Hero or Villain: Battle Royale, and Tokyo Wizard. There are many strengths to ChoiceScript, in that it has allowed me to write stories where the reader can navigate through complex mechanics that produce different outcomes, similar in some ways to the gamebooks of the 1980s. Another of my passions is board games, and I have wanted to explore how such mechanics can help retell the final battle that takes place in Hero or Villain: Battle Royale.

Essentially, in the final chapter of Hero or Villain: Battle Royale, the reader can fight a number of characters, but there is no complete freedom to explore different scenarios or what could have happened if different combinations of heroes reached the final. By creating a card game, it is possible for players to experience fights between the different characters, in the background of a crumbling arena that will only allow one player to survive.

Thus, I have tried my best to experiment with a combination of various types of mechanisms that can ensure a fast, punchy and highly replayable card game. Aside from combat elimination, the game also has social deduction and Russian roulette mechanics that will ensure only one is left alive by the time players go through one deck. The game is designed for 2 to 5 players, and takes 10 – 15 minutes to play.

Awesome! I just took the opportunity to complete my Adrao game collection in the HG app, and I just checked out the Kickstarter and it looks amazing.

I have a suggestion for @adrao - how about a reward tier that allows you to get an autographed copy of the card game for a few dollars more? I would definitely go for that! I mean, I’m going to go for it anyway because the game looks awesome, but a signed copy would be even cooler.

This is terrific, congrats to Adrao!

Has there ever been any thought on the company’s side to a card or board game that incorporated multiple characters from across the label? Similar to the old Wagon Webcomic CCG that existed in the days of yore.

Bringing together the massive talent of indepedent creative people from across the internet to create this innovative and action-packed collectable cardgame.

This is awesome! Congrats!

@Mary_Duffy Thanks to you and all the staff at CoG for this promotion! (well, not just now but your support throughout the years!

@AletheiaKnights thanks! About the reward tier… I can’t change those anymore, but I will be happy to sign a copy of anybody who tells me they want their copy signed!

(never thought anybody would be interested in it, but it is quite easy to do

@hustlertwo @jasonstevanhill and I discussed (long time ago, months or even a year back) the possibility of doing other card games based on CoG IP. I guess this is a bit of a trial, and if it goes well I will talk with him about the possibility of doing something with other CoG characters. But, interesting idea, could be nice maybe having a board game that allowed players to battle between multiple CoG/HG characters…

Somebody on youtube made a video describing how the card game works! 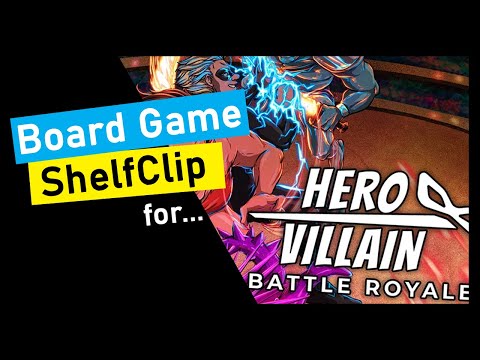 Is a single copy of the game enough for multiplayer play? Just want to make sure.

Ups, sorry for the super-late reply. But yes, one copy is enough for multiplayer… basically with one copy up to 5 players can play!

Still 6 days to go on the campaign, but we are almost 60% funded… this means we could make it, but at this point every backer counts. If anybody is considering backing this please do so, it would really greatly help us at this point to get some momentum going towards the end!

No worries, I went ahead and backed it anyhow. Good luck!

The game is now fully funded, only 30 hours left for any late pledges

Congratulations! I’m so excited to see where this goes!

Question: will this game make sense to someone who isn’t familiar with the “Hero or Villain” games? I don’t have anyone to play with except my husband, and he is not an IF reader.