Sorry that I haven’t replied to the last comments (I will do so in the coming day or two, hopefully). Basically, all my attention has been on writing more of the side missions for the game. As such, I just implemented a new one today, where you can now bet on the outcome of the fights! (I have a feeling there might be some bugs there, please let me know)

Sure I’ll try to find bugs. These pictures are a few days old so the things I found might already be fixed. 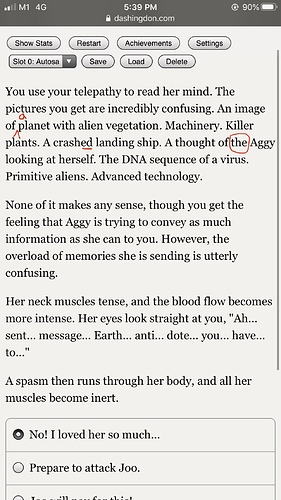 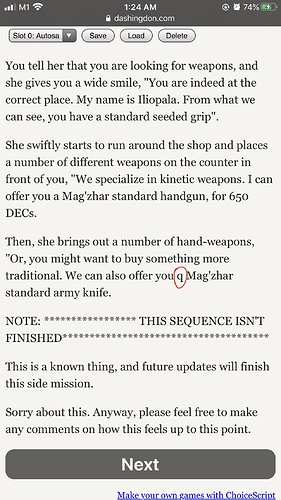 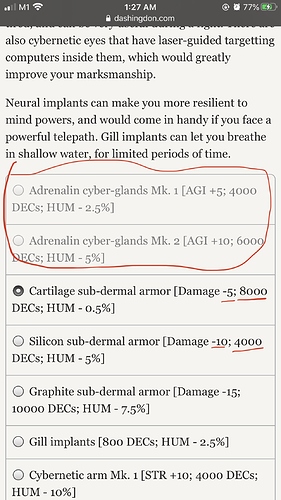 image1242×2208 385 KB
Can’t buy agility upgrades even with enough money and you switched the prices for -5 dmg upgrade and -10 dmg upgrade for all the shops. 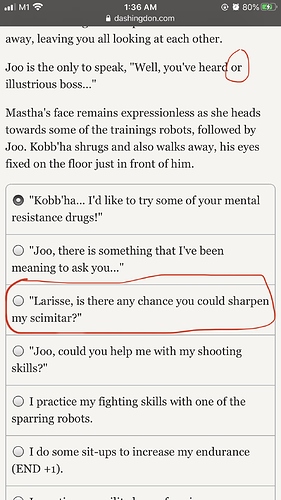 image1242×2208 345 KB
Not sure if this option is supposed to be there. Larisse was in the hospital during that playthrough. 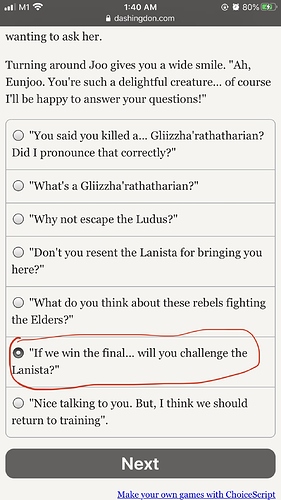 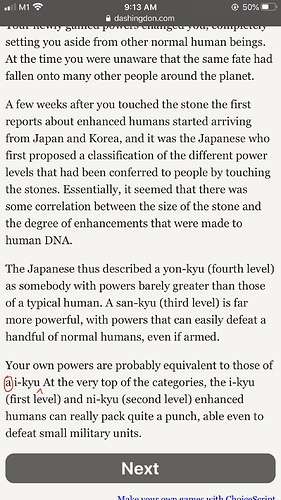 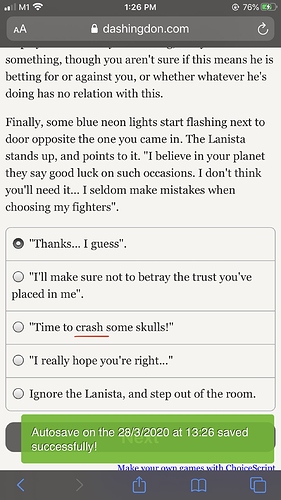 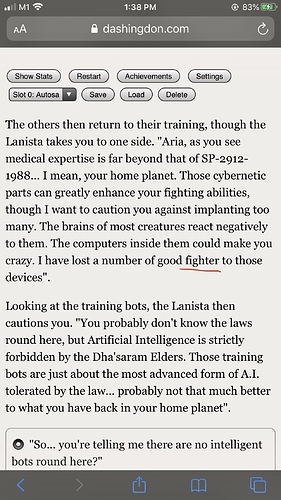 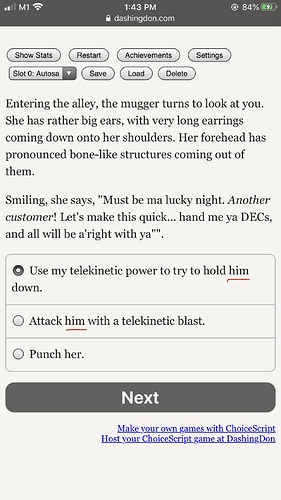 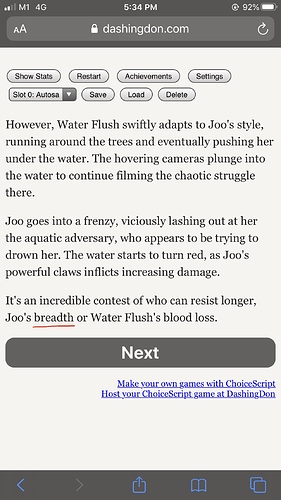 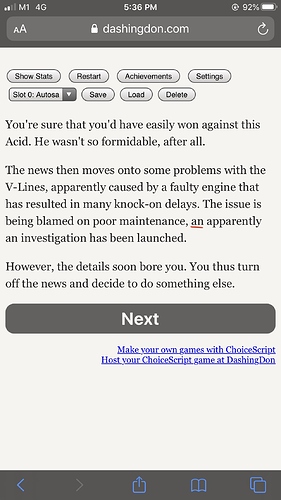 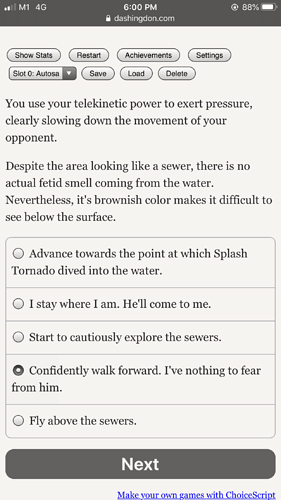 image1242×2208 534 KB
Not sure if it’s intentional but using telekinesis to slow him down loops me back to this page. 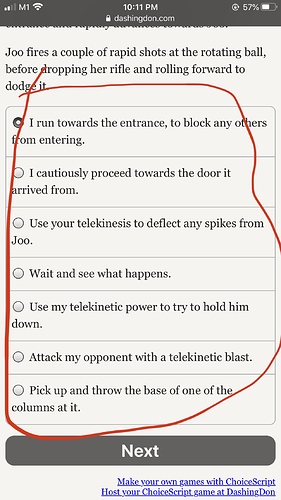 Thanks for those! Sorry I forgot to incorporate them in today’s update, but will work on them tomorrow.

Otherwise, just uploaded a new version of the game. It includes quite a few changes, including:
-Possibility to talk and RO Larisse
-Beginning of side mission to contact rebels
-Finished subroutine to buy weapons
-Many changes and bugfixes.

Please let me know if you find any issues with it!

Thanks for those, I think I found everything (though do let me know if anything persists, and I’ll check it again!)

I will upload a new version in an hour or two, after I am finished with other bug reports that came in today! 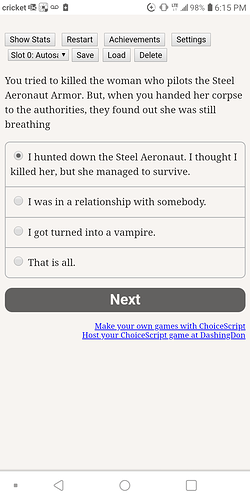 Thanks, I’ll correct this! (was in the middle of bug troubleshooting!) 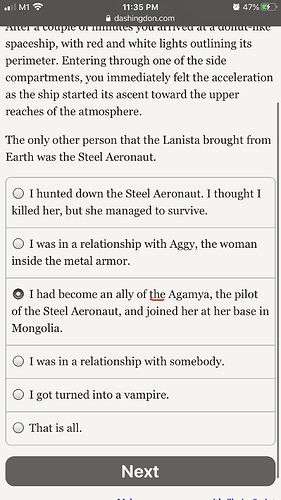 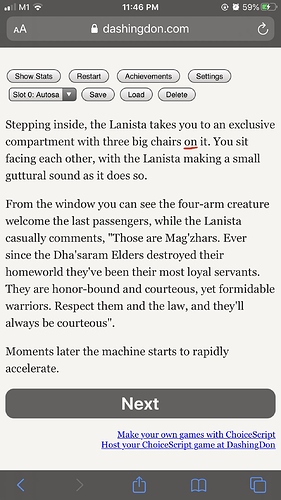 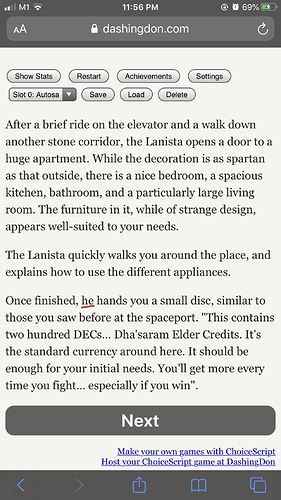 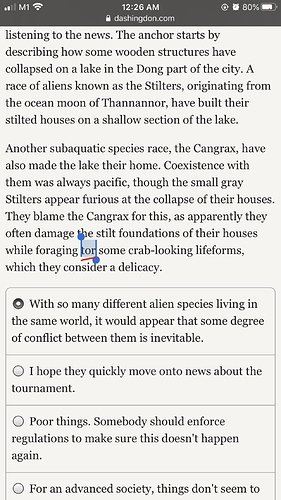 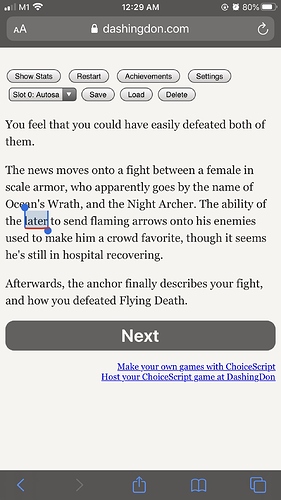 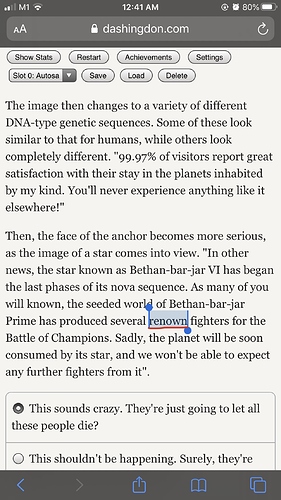 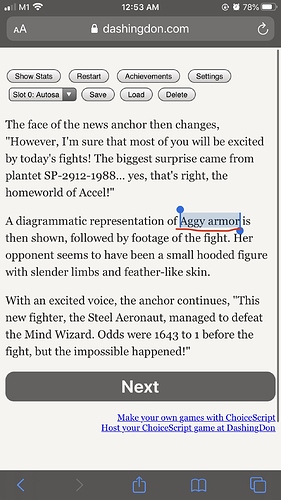 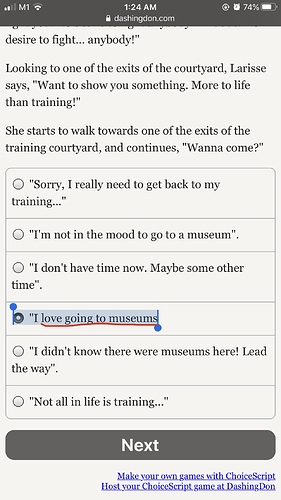 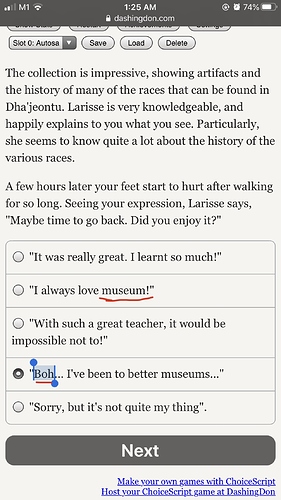 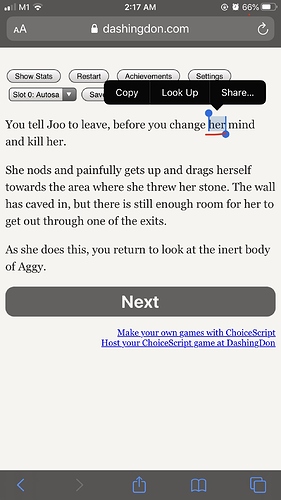 I’m very sure ‘Aggy armor’ is wrong but I don’t know how to change it.

@0roxson0 thanks for all these, I amended all those, and will update the game in the next couple of hours or so. Otherwise, how do you feel about the sequences with Larisse? And other questions you’d like to ask, or things you’d like to say, etc?

How do people feel about the amount of side missions? (basically trying to judge how much more effort is needed in that sense, until I can get a first version of the game submitted… I will hopefully continue to then add missions afterwards…)

I think it would be nice to be able to use your engineering knowledge to improve your equipment with some alien technology.

It probably might be too archaic for that world but I would’ve loved to be able to buy or build an alien tech bow.

Also the fights felt way too easy using 4x time accelerated speed and an energy enhanced bow and arrow (now I didn’t even have exploding arrows and my agility was only at 30, as well as many other stats being far below the ones I had at the end of the first game).
It was always the same, first I shot them with a single arrow, then dodged and then shot them with a barrage of arrows making them collapse. It might be that super speed it too op since you never get hit by anything at all, but still I shouldn’t have been able to wipe them in two attacks.

The game is almost finished now, and I am basically just working on the achievements and bits and pieces that people have reported on.

@MartinMarten there should now be some options to invent things using alien technology. Any other thoughts about what you would like to invent?

About the speed powers being overpowered… how did you get through the psychic opponents? I have invited you to the private thread, can you let me know how this feels for the full game? (also, which difficulty level are you playing on?)

@TheJake_Kelly3 thanks, corrected that and invited you to the private thread! (let me know if you find any more!)

Wow, you are one quick writer.

How do you do that?

I didn’t feel a balance issue using 2x speed all the way up to 8x like @MartinMarten did, although after seeing his comment I ran through with an intelligence build using a bow and was given options to use superspeed with the bow during combat pretty consistently.

I got up to the robot you gotta fight while taking the heist/robbery approach to the endgame and error messages sprung up and froze the game. Although I’m not sure that’s related to the same glitch.

Thanks for the invitation

I’ve been playing on hard and very hard difficulty.
Since 4x speed makes one pretty much invulnerable to all physical attacks, I always chose having a strong psyche as well as +20 psyche and +7 psyche and being a vampire. Although being a vampire doesn’t seem to be necessary. With that setup neither physical nor psychic attacks can harm you at all.

So essentially it’s 4x speed and 52 psyche and you’re invincible.
Unlike enemies you don’t appear to lose stamina. Maybe if you would slow down over time if you dodge their attacks with super speed that would balance it.

@Bokeh, I’m surprised myself that I managed to finish so quickly. I guess certain things helped 1. This is a continuation of the first game, so I could re-use many of the mechanics and powers (that was a HUGE help, for example, when making the new fights I could re-use code from old-fight, tweaking it so that they are different according to the new opponent. 2. I’ve learnt much regarding game structure, narratives, etc (conversations with other authors, including @Eric_Moser, @Jacic, @jasonstevanhill, to name but three, helped a lot… for example, I went to Narrascope last year, which opened my eyes to so many ideas and thoughts!) 3. Coronavirus outbreak, so much of my activities in my dayjob were cancelled… this meant that for much of march and april I had little to do, and could really advance on this game!, 4. Having a large number of wonderful playtesters. Seriously, I cannot overemphasize how much help this is… posting a new version, and getting tons of feedback is a huge boost!!

@CheffPanda I didn’t quite understand if you were reporting a bug (you mean that your intelligence build had no superspeed and you were being given that option?) Otherwise, note that my latest update to the game modified almost every file, so other people are reporting crashes (even when the game at my end runs correctly). Basically, the problem is that when too much of the game changes, the save system in dashingon doesnt work properly anymore, and you need to restart the game (sorry…)

@TheJake_Kelly3 ah yes, thanks, forgot about that, will finish it today!

@MartinMarten, wow… you seem to have found a sweet spot to get through the game on such difficulties! (Well done!) Anyway, I have now introduced some tweaks to two of the fights. In one there is an attack that even a speedster cannot run away from (however, on round 4 of the fight… meaning that you can still avoid it if you take your opponent down quickly). The second fight also has an attack on round 4 which is now much harder to avoid, unless you are playing in very easy difficulties (i.e. you need a high speed AND a high agility). Hopefully this now minimizes the feeling of “speedsters are just invulnerable, even in higher difficulties”. Please play it and let me know what you think! (if it is unfair, and whether it still feels too easy…). Thanks so much for all this feedback!!

Yep, i’ll join on opinion that speed powers are too OP, in part one, and part two both.

Just got second run with time-bender. Worked even better, when with Air powers.

Speedster with bow + high PSY can be quite invincible.

In battle royale it’s kinda ok now on normal(you get occasionally hit in late rounds), but imported saves can pose a problem, since speedster can easily get 2 more stones, significantly lvling AGI, and lvl up marksmanship quite a bit, making second part of the game really easy.

I completed first game around 7 times, from easy to hard, and found out that speedster are easier to play, than any other power type.

Just completed Battle Royale on Normal, you still can become invincible, but it takes some effort to achive. But with some cybernetics and explosive arrows - last 2 battles are still too easy.
Character was something like that:
STRENGTH: 6%
AGILITY: 30%
ENDURANCE: 4%
INTELLIGENCE: 19%
PSYCHE: 57%

that counts as bm
But it is a little better with the changes to the battles and in general I doubt that it is a big deal if that combo is op, because most don’t follow that strategy anyway. It’s just that as a speedster you never gotta heal yourself so you can easily use every opportunity to become stronger without any risk involved and with energy charged (explosive) arrows you deal a tad bit too much damage, it’s arrows after all.
You can still beat the game on very hard as speedster and I doubt that would be possible with most other powers, but as stated above I wouldn’t worry about that, since it takes several playthroughs to figure that out.

I will admit I like what there is right now. The fact you added more to the vampire makes me happy. I wonder if your going to have more people mention the vampire, though I’m guessing it’s not that odd maybe?

I’m more curious if anybody knows Humans are cresting Intelligent Bots? And another thing I want to ask Neef’elmets is why the elders prevent contact with Earth.

Do the Elders even know about vampires? More opprotunity to get into the lore would be nice.