As a Minor God, your fate is to fight over control of this world. But how will you approach the conflict - with military force, skillful diplomacy, superior management or even divine powers? 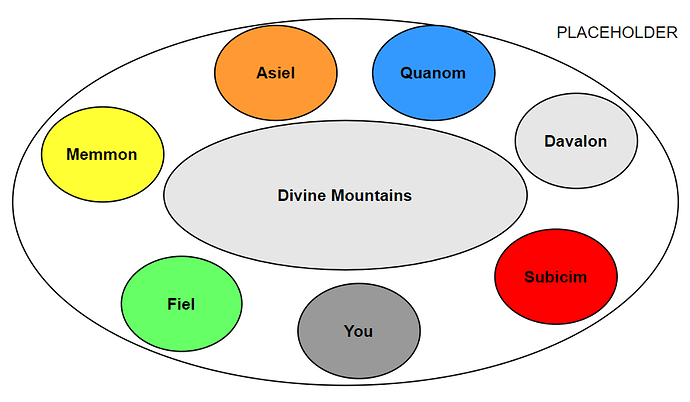 This is my 4th HG project that I’ve been working on recently. Currently only the introduction to the story is mostly (roughly) functional, and the main mechanics of the game are still very much work in progress.

The main reason I already posted this WIP is that I’m somewhat at a loss / writer’s block on how to proceed right now. I think this idea has potential, overall, but I’m not quite confident about the details on how to execute the concept yet, nor about the potential level of interest/demand. I suppose this could be a good way to get some suggestions / feedback / information about the feasibility of the idea etc. at this point. Depending somewhat on that, as well as several other unrelated factors, I might simply shelve the whole idea for now too. It’s a bit uncertain at the moment!

(Warning: there are some heavy spoilers + outdated information hidden in the game files if you look through that - just keep in mind that those hidden parts are not exactly all relevant to the current plans!)

Which of these gameplay areas would you prefer to focus on?

On a scale of 1 to 5, how interesting do you think the concept is overall? (compared to all HG WIPs you’ve seen)

I’ve always enjoyed God Protagonists! Putting this on my list of WIPs

You have my vote of confidence

I love a godly mc

I’ve been waiting for a game like this!! I’m excited to see what it becomes!

[1] Could our God!MC have a more personalised touch. For example, a more Religious God may focus on being kinder or a military God being on the more strict and disciplined side. Ofc I realise that this is still a very new demo and may take a lot of coding but I do hope it may be considered.

[2] If/When we interact with the other Gods what sort of dynamic will it be? More family? Council? When I mean family if anyone has watched or read the new ‘The Sandman’ series (on Netflix) or its comic, I mean sort of like that and if you don’t know what that is then (I suggest you watch the series its mega GOOD) basically anthropmorphic concepts i.e. death, dream, destruction, etc. They all are brothers and sisters.

[Soz for making this so long im just rlly hyped rn!!! always been a lover of god protags!!]

[3] Will there be more intimate interactions with those below MC (followers, soldiers, etc)? Hope so cause I want my character to just go around town

@Lonily You could say they’re more like rivals/colleagues rather than close family to each other, although they kind of have the same “parent”. It is possible there would be events to have a closer look at life on the ground. Not quite sure how much the attitude of the MC would change depending on stats.

@KuroBushii I’ve really only seen Aether: Life as a God.

All in all, it does look like a game like this would be positively received (at least as an idea/concept). I’ll have to think about certain gameplay details a lot more though.

I know of “The Aether” is a published HOG and I believe there’s another one where the MC is a child of [insert Greek God](i.e. Aphrodite, Hephastus, etc.) I can’t remeber the name though soz

It’s call Zeus’s dilemma, I think demo is not being worked on

Ohhh, this is a pretry interesting concept and pretty well written. Will look forward to this

Thanks for the surprisingly many comments / poll responses / likes so far!

Actually, though, I think I’ll pause work on this project for now. I got some good ideas for a possible new/improved approach to the whole idea of playing as a god (+ confirmation of the fact that there is clearly latent demand in the first place!). However, I don’t think my plans so far are quite good enough, and starting from scratch would be better. Basically the heavy preference seems to be on really playing in the role of a god, and focusing on the story over game mechanics, whereas right now the opposite is true in both cases (focus on managing mortal affairs / game mechanics). I agree that a more compelling story would be possible by focusing on the story of a god’s experiences rather than mainly managing a human territory like a king of sorts.

Thanks and I’ll most likely be back a while later with a different approach!

It’s already good so far so I can’t wait to see what you’ve got ahead.

Locked at request of author.