I really liked the atory so far

Though… I chose a fem character but sometimes, the pronouns are he/him.

I also came across a bug which prevented my progress and I sadlyhad to restart from the beg (kind of felt bummed since it’s a bit long into the story)
It is in the choices whether to lead or wait for back up.

Anyway, I might replay later, try to pick up where i left off

Yeah, the pronoun thing is when I accidently wrote “him” or “he” into the prose instead of putting the little coding thing that makes it the pronouns you selected. It’s a human error over a machine one, so it’s slower to fix.

And there’s a lot of bugs, yeah, I know its pretty annoying when it boots you for one. I think I’ll make a big deal about it being updated once I’ve finished one of the first three stories. The battle one is the furthest along at the moment.

This is extremely interesting so far! I love the concept, (definitely getting some Ranger’s Apprentice vibes, this game makes me feel like Halt. wait. actually, sint Halt sent to a battle about to be lost

@CaptainMJB I’d be very interested in creating your own group of followers… or just have one apprentice.

Thanks! Other than Ranger’s Apprentice, the Brent Weeks books (Lightbringer), Michael Sullivan books (Ryria or whatever its called), Patrick Rothfuss too. That kind of like broad form, coming-of-age fantasy.

I have now edited out this bug, but yet to update it on the website.

Yah. It does remind me of Halt or Will later on. Will there be a concept like in rangers apprentice of fiefdom?

If you mean like the government of the world, yeah its dominantly feudal. Most of it will just be a backdrop for the stories, as your character’s role in it is the focus. I wanted the world to feel pretty familiar and typical of fantasy, although I do have some weird stuff, like the androids.

@CaptainMJB
Hah, I’m not looking forward to the programming aspect if I ever get around to writing a cog based novella. I can see it being a nightmare. 3rd person is an interesting choice; you’re right, there are not many 3rd person style ones in the multiple choice genre. It might be a little tricky to make it clear to the reader intially, given the nature of the format though. Maybe, instead of the omnipresent 3rd person make it clear its narrated by another character? You already have the option there with the friend. Not 100% sure that will make it less confusing though. Anyway just a suggestion.

This is true. The obstacle to this is that the stories are occurring as told by the protagonist, although not necessarily from their point of view. Since they’re designed by the person clicking the buttons, to give them a distinct voice would feel dishonest. I’ve been thinking that just sharpening everything, like making what the player/reader has control over from the get-go clearer would probably be easiest. Alternatively, I am okay with people being confused, since I feel eventually stuff becomes clearer as the story chugs along.

That could work. If you’re just looking to sharpen it, while maintaining a sense of confusion, your best bet is too make sure its attention catching. From what I’ve seen people don’t mind being confused if its entertaining. 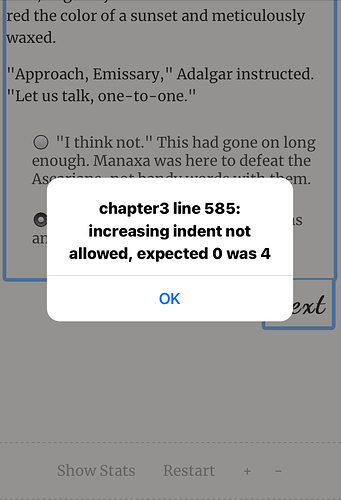 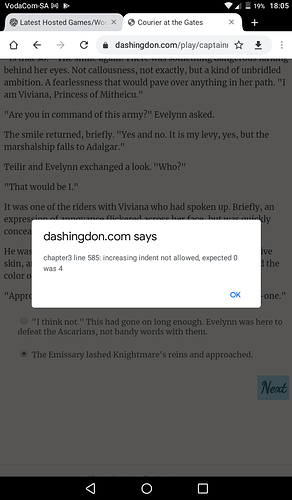 Yeah this bit of it I’m still working on. Those are fixed, I just haven’t updated it to the site yet. Thanks for catching it.

I really enjoyed this until I came across the aforementioned bug that you’ve fixed! I look forward to reading more later.

I think the customization is fine, and I like that all the stats are things that matter, nothing more, nothing less. I also like the meaningful choices that were presented, for example in choosing the target before the Gauntlet(?), and how that in turn affected the stats! So far, I can play the character that I want to play, which I love.

Lastly, I like how things are broken up; I am guilty of skimming through long paragraphs and walls of text, and I was never forced to do that, which I appreciate!

Thanks! This is good to hear, particularly the skimming thing, which is also like second nature to me now. And yeah, I wanted the stats menu to feel minimalist. As I go when writing it, I have so that depending on something the Emissary says or does if I feel it makes them seem more dutiful or honorable (or less dutiful or honorable, etc.), it pumps that up a tiny bit.

Also when I went to go ride out to talk to the guy, the Phoenix Bastard it wouldn’t work.

Yeah, as I said above, I haven’t updated it yet so the bug isn’t fixed. I’ll probably that today or tomorrow.