Choice of Romance — Now in Spanish!

Hello there! Allow me to introduce myself. I’m an English to Spanish translator aiming to specialize in the video game industry. Last year, I contacted Choice of Games to ask for permission to translate one of their games as a final project for my post-graduate course. They agreed, and I worked on both the translation and its analysis for my paper. The result is a complete version of the first part of the Affairs of the Court trilogy, and I’m quite proud of how it turned out!

In case you’re interested, to create this version I had to ask for the original game scenes and download the ChoiceScript source from GitHub. The first step was to make some changes here and there for the game to run properly without being hosted on a server. I then translated the scenes, tried my best to localize the UI, tested the game several times, and finally compiled it. It was a quite complex process, but also very fun!

I’m a huge fan of the Affairs of the Court trilogy, and I think I did my best to convey the general feeling of the first game. The feedback received was very positive so far, and I would love to hear other people’s opinions about it. Also, if you know any Spanish-speakers that are not so fluent in English, this is your opportunity to introduce them to a great title!

The compiled version is here (you’ll have to download the file and open it with a web browser): 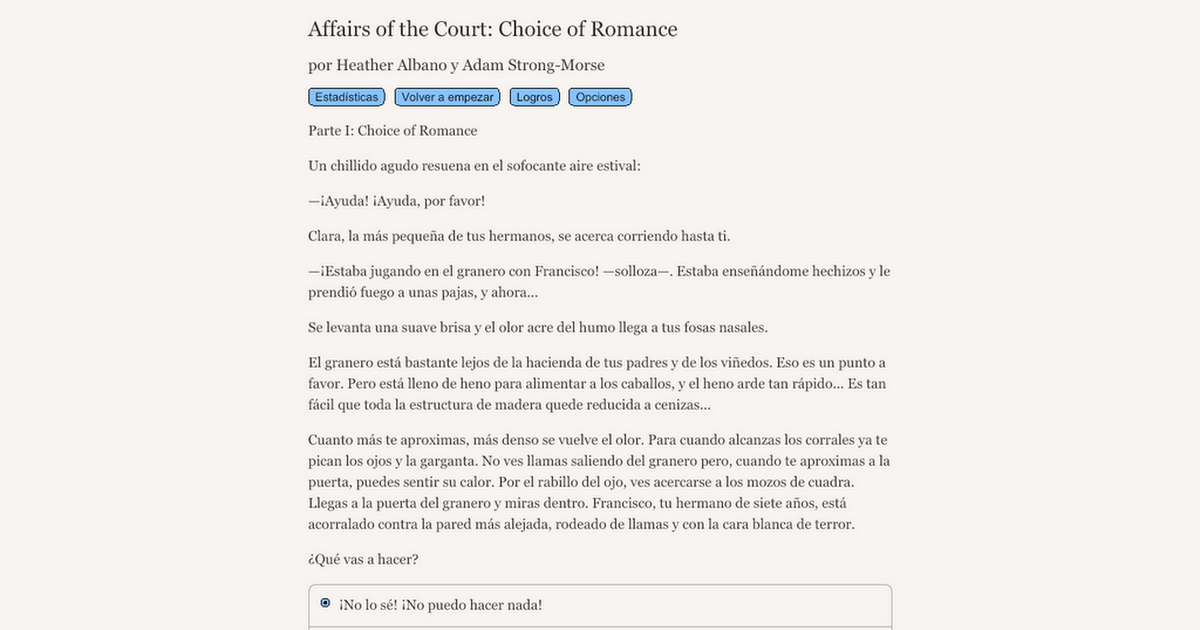 You can check it out in Dashingdon, as well. Mind that, in this platform, the UI will be in English, but it’s the most convenient way of trying the game without having to download it:

You’re more than welcome to provide feedback on it, and if you spot any mistake (being such a huge game, it probably will have more than a couple of them), let me know so I can fix it!

This is great news! Always happy to see more interactive fiction in Spanish

Thank you for your hard work!

I can’t even fathom the titanic effort that this must have been — congratulations on translating the whole game!

I’m curious whether there was any deeper reasoning behind this choice, or did you just go with the variety you’re most familiar with?

Also, is your paper going to be published somewhere? I would love to read it!

To be honest this is awesome, the quantity of Spanish people that don’t speak English is astonishing and even with those that do, you’ll see them asking for Spanish translation (which honestly isn’t all that easy to do); sadly the only time that there was a try for implementing this was, if I remember correctly, with Choice of the Dragon and the investment didn’t pay off, hopefully work like this can resurrect the idea to have more Spanish translated games.

Whoa, that is a very interesting work. I like translations, and I’ll definitely check out what you’ve done. From the start of the game, it looks good.

That made me curious too. I was hoping @LycorisRadiata could talk a bit more about her translation process, and which Spanish she decided to use.

Great news finally, I waited for that for so long !

That is amazing that you have done this! I am extremely impressed.

I’m supposed to take my bilingual test for Spanish in a few months, please don’t mind if I use your translation as a self-test

I speak Brazilian Portuguese, but I can get away with Spanish just fine, especially if it’s written. So, obviously, I don’t have a preference either way, usted or vosostros (or vos

), but since the game has a medieval/renaissance flavour, wouldn’t European standard make sense?

I know European Portuguese sounds “old” to Brazilians, mostly because they use some pronouns that we have replaced one way or another (although the official grammar still accepts them).

since the game has a medieval/renaissance flavour, wouldn’t European standard make sense?

If that’s the case “ustedes” would be better since we are nobles and thus more prone to a formal talk, “ustedes” is the educated form of “vosotros” after all

, though, of course, I’m a Spaniard myself so European Spanish has no such “ancient” connotations for me.

Another thing I’ve noticed that made me very curious is that Mendosa is now Mendoza in the translation, I wonder if there’s a reason behind that as well?

If that’s the case “ustedes” would be better since we are nobles and thus more prone to a formal talk, “ustedes” is the educated form of “vosotros” after all

To be fair, the couple instances of “vosotros” that I spotted referred to the MC and their family, so it’s in the context of people one’s close to (though the whole second person narrative thing is a bit of a mind-screw here, I think.

You could argue that if the narrator is supposed to respect the characters or show deference to their rank, “ustedes” would be more fitting, while if you argue that the narrator is not really a character but rather represents the MC’s internal monologue, “vosotros” makes sense).

Not a fan of the series, but great job! You must be proud of yourself after all the work.

Wow, so many questions! I’ll try to answer as accurately as possible

Myrtle is right—I went with the European Standard because I’m from Spain, and my target audience (the academic board) also was. Using ustedes instead of vosotros would be a valid option in other countries but, in European Spanish, usted is used mostly in formal exchanges. Back in the early modern period, Spanish-speakers used either the usted to refer to each other formally or the voseo, which uses the second-person plural and is basically extinct nowadays in the Spanish territory (while, in countries like Argentina, it has become the standard form of use). Since vos is quite mainstream here for Medieval and early modern speech in literature and other media, I chose to discard usted altogether, but kept the tú and vosotros to emphasize the difference between the formalities of the Court and the way two family members or lovers talk to each other. The tú and vosotros are also used with the servants because they didn’t “deserve” the treatment back then. In short: the Spanish language is weird and very diverse.

As for the narrator, I just interpreted it as the MC’s internal monologue. I tried to use a more formal tone in the first scenes and then switching, but I found it created an unnecessary distance between the reader and the narrator, which was probably not one of the game’s purposes…

The name switching deserved a whole section in my paper. My justification was basically that, since Iberia is meant to represent an ancient version of Spain (with, you know, magic and sex equality), the names and surnames should be credible options for that period. De Mendoza is a very renowned surname here that screams nobility, but De Mendosa is not well documented for that period and sounds more like a modern Latin American variant, or possibly Portuguese… It could be kept as in the original, I just chose not to, thinking of the potential readers. Most of the name changes are just to appease to European Spanish readers and to avoid them thinking “huh? that sounds weird”.

I haven’t published the paper yet—I will ask my college for permission to post it online. Meanwhile, you can take a look at the presentation for it, if you’re curious: 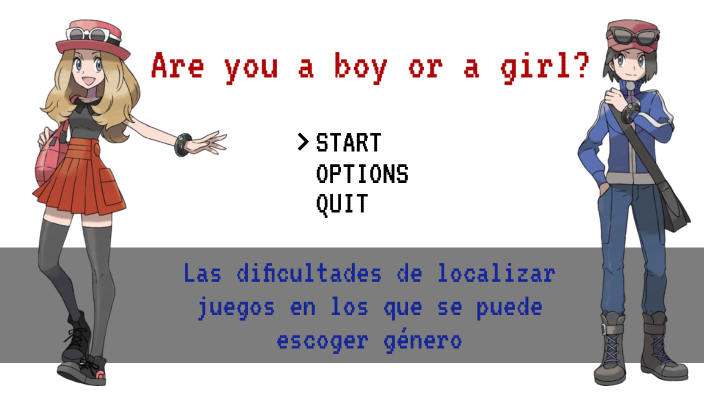 As a spanish speaker, I’m super excited about this. I consider myself fluent in english but, sometimes I want to recommend these games to my friends and then, I remember they don’t speak english! :c

They should translate all the games into Spanish with the Microsoft translator, it is not very difficult, and I think they would sell more.

They should translate all the games into Spanish with the Microsoft translator, it is not very difficult, and I think they would sell more.

That would be a horrible mistake so I take it as a joke drink you part good fellow, even if you use this method to save time, it would be futile anyway, cuz they translations are innacurate in long texts, on to of that is almost impossible translate thing such as jargins, idoms, even sometimes phrases with double sense/meaning which of course every country has their own, and in translation, it should be replaced with an equal, funny enough is a mistake pretty common or a hassle to the translator doesn’t bother with it, usually laziness if I’m totally honest.