The final chapter of Choice of Magics happened to be due to CoG the same day the contest was ending. I’m pretty happy with it! The first playtesters to go all the way through the game were three friends who had never played a Choice-of game before, who debated on the couch what the MC should do next. In a shameless attempt to pique interest in the game, I’m posting their final character here. 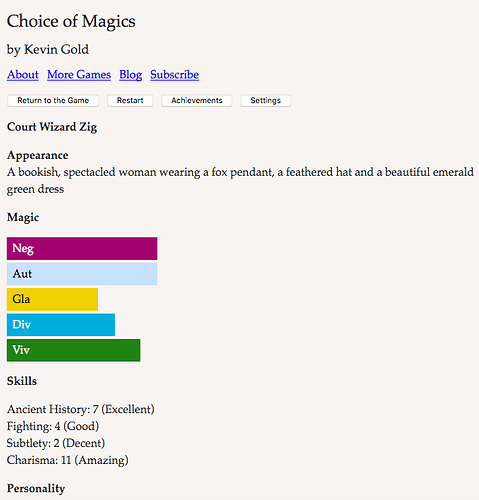 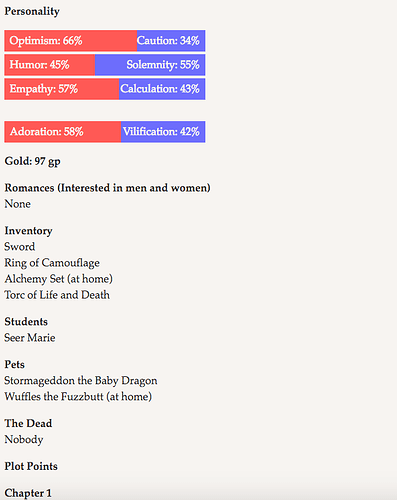 Interesting I’m always a sucker for a magic based game lol.

What are the stats under Magic?

Kinda want the stats to be renamed to these. Cannot wait for this

Actually this feels rather sincere compared to that

is there a WIP demo available?

I assume you created some new class in the CSS file for those?

This looks so exciting!

Well, the beta will be happening reasonably soon…

The colored bars are actually done with a script and a gosub that takes the color as a param. The script reaches into the DOM and mucks with things directly, in a way copied from the other chart commands in the ChoiceScript code. Feeding the color to the script is awkward, though - I use a global stats variable for it, since *script doesn’t naturally take arguments like that.

I figured if it was popular, there would be some popular support for modifying ChoiceScript permanently to be able to do this with a command; Dan’s often reluctant to change the language without good reason.

Well then, I’ll just have to make sure to register my support for it. Colored stat bars are a cool feature and worth adding.

Also: The game has a humor stat. Now you’ve got me hooked.

Ahh, it’s the *script command then.
I guess that’s learning JS for me :[

But hey, I have an assignment from my class to code an iteration program. Perhaps this is a great excuse to dive a little bit into Javascript

A slang-like term for a person who is in the furry fandom. A person who is a fan of anthropomorphic, or cartoon like animals with human-like characteristics.

Oh, that’s great! It looks even more interesting than I imagined. I’ll be sure to be on the lookout when it comes out.