So I have put this game up a couple of times though each time people seem to like the concept, but have a hard time reading it.

With that in mind, I decided to put it up once again with the specific goal of finding out what I am doing wrong. Once I do that, I will re-write this post.

Anyway, feedback is welcome, and here is the link:

Stats page should work now, so feel free to have a look and see how you like it.

When we look outward in the waning minutes before the death of a year, who ever wonders if we are not the only ones?

When we speak our desires and fears into the silent darkness, who ever wonders where those words go? Who might be listening?

Who ever posed the question of what might happen if perhaps, just perhaps, If 1 of those watchers ever decided to do something?

There are currently 4 RO’s, as well as several other characters who you can have a platonic relationship with.

I hope you enjoy, and give feedback.

I was a little thrown by a fight scene with a confused, naked indivdual. If you find someone in that condition how does that event happen? I know I wouldn’t just attack someone like that - which is how I’ve interpreted the chain of events. Now if they are concious enough to have a confused panic and try to defend theselves, that’s a completely different matter. I think that scene’s chain of events, and reasoning behind them need to be a lot clearer for it to be relatable.

I like that you are introducing the other characters via dialogue. However, the dialogue needs to be supported by descriptive text, such as - where are they?, What are they doing? This gives us a more rounded introduction and allows you to describe characters who aren’t participating in the conversation. For example, I thought the character Anlnasl (Aslnasl??? Sorry, such a unique name I can’t remember spelling), was a mispelling of one if the other characters’ names because that was their first appearance in the text and there was no previous indication of their existance.

To add an aside to this comment - you could add more scene building in general. I liked the first person use, but as a writing style it is very abstract so it helps to expand on what they are reacting to. Additionally, it would be good idea to use Grammarly to help with some of the errors in text. I’m unsure how it handles colloquial conjuctions though, so: where did = where’d and why did = why’d.

Sorry if this came across as harsh. These comments are meant to be constructive. Over all I liked what you have, even if there wasn’t enough plot to quite hook me yet.

Technically it’s the confused naked individual, a.k.a. the MC, who is actually attacking. And the others are just defending themselves.
That’s fair on the scene building though, I’ll take a look. From what I’ve heard from some friends, Grammarly has difficulty with the code of choice script, but then again I could probably just cut and paste the dialogue and such into Grammarly and do it that way.

Thank you for the spelling corrections. However, if you could, would you kindly not use screenshots? I can’t use them, and my phone just says screenshot, and a bunch of numbers/and letters. VoiceOver doesn’t really handle pictures that well anyway.
Also, I’ll fix that. Thanks.

@ArchivistAlpha096 said that the stats screen is work in progress.

Before I get into anything I just want to say that I really adore the easy flow of banter each character has with the other. What you have created feels natural and warm, easy to imagine, and the characters seem very familiar with one another. Congratulations on that! That’s difficult for some.

Do I have difficulty with reading this? Yes. But I’m saying that you do have a gem of a plot in your hands, it just needs a little polishing.

That makes a lot more sense! This issue with ‘action’ scenes - you have to very clear on what’s happening while trying to maintain quick pacing. If the balance slips one way the pacing is tlo slow and bleeds away the scenes impact, and if it slips the other way the chain of events gets muddled.

I have heard the same about grammarly, and yeah, the tedious process of copy and paste seems to be the only solution… However, the other option is to have people edit, which can helpful at times but can use lead to, for example, 3 different people correcting 3 different ways. ( If only because there are differences between British English, American English, and sometimes Aussie English or other dialetic variations.)

@ArchivistAlpha096 I’d recommend an overhaul of you stat page, it’s really messed up. Also there are a bunch of typos. some of them are in the prologue. if you dont have anyone to check for spelling errors and what not why don’t you use Microsoft Word an do a spell check or something.

Other than that its still good.

Ya np, if you didn’t get the last slide then, it was an error that said line 1236: invalid string, open quote with no close quote: "))

It’s interesting I recall reading it in the past and much like everyone’s all ready said i can’t add to much at the ment though will point out something that feels weird to me when reading. Get the impression that the group is medieval fantasy feel…and that our mc is from let’s say a present day world which is all good but the at the end the watcher the way they come across as futuristic scifi lol so it feels strange yet hoping through the course of the story you can make it all flow well for I am looking forward to seeing what else the story has .

What’s this story about

I’m quite confused by what I have read so far. My thoughts" “Wtf is going on here???

” but nonetheless, intriguing WIP. I think I like your writing style
There’s first-person POV, something I love, so every WIP that has it grabs my attention immediately.

As for something I’m missing:
Option that MC doesn’t want anyone in bed or that they like women and men. 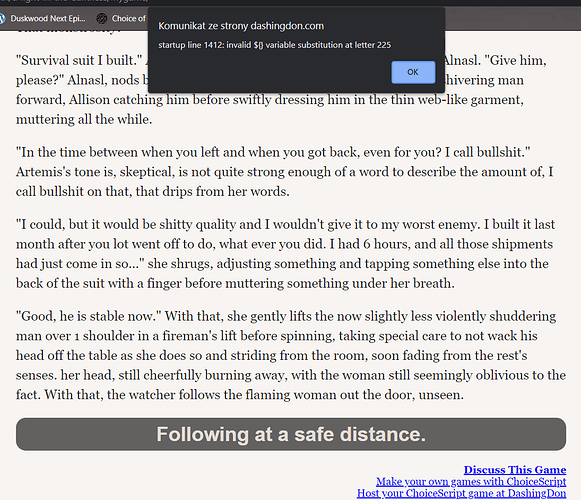 Do you mean the people in the prologue, or in the first part of the actual book?

As of right now, the option about who the MC wants in bed sets the MCs orientation, though I probably could rework it a bit. I’ll take a look, thanks. It also sets the gender of the RO‘s, but I should be able to do a workaround. Could probably just alter it, so it’s more like just deciding who the MC would rather be with, as friends or otherwise, most of the time.

Looking forward to playing more when it comes out. Also is this a glitch or the end of the demo?

If you’re getting an option saying play again, then that is the end of the demo. Anything else, and it’s probably a glitch and I’ll have a look at it. Although, would you please not use a screenshot if possible? My phone doesn’t really deal with them particularly well. Or my computer.

Need to tell a bit about game what it about really