[WIP] The Shadowbane -- Chapter Two is Out

Announcement: A small update (11/30)
If you have time, please also consider participating in this Poll

Hi, I’m Kyle, a long time lurker here, and I admit I am really nervous in presenting my first project. I am not a native English speaker, so please point out for strange expressions or sentences you spot. The cover picture in the demo is drawn by my awesome roommate Jo, who will be doing some of the character portraits soon.

Here is a summary:

The Shadowbane was a hero of Tavaria during its founding days. According to historians, it was them who faced the first incursion of Shades and won. They banished the Shades back behind the veils, a magical barrier separating the land of mortalkind and the northern waste. This singular action gave Tavarians a long respite to rebuild and prosper. However, the happy days ended when an unknown source of magical power breached the veil, releasing the vile creatures from the captivity. Tavaria, struck unprepared, suffered defeats after defeats, its fair lands ravaged and its king perished in battles. In a desperate attempt to fight back, the Shadowbane was resurrected.

Note that since it is still in early stages, I plan to implement the save feature once the common routes are completed. They are already written, but I am still toying with the stats to modify, which might impact the save files. If you have any suggestion, please feel free to write it down!

Currently it’s about 2 chapters done, and I plan on updating every 4 weeks.

Gather your party and venture forth!

The game’s stat mechanic is inspired by DnD, without the dice rolling part. Some of the characters are also my old PCs, whom I think will be interesting to write a story about.

Can we become king?

@Nathan_Wolverton
Yes, you can. The easiest way is probably through Kaelyn’s route, but there are hidden paths to reach that goal designed for other routes as well. Of course, they will be significantly harder.

I really love the atmosphere that you created! You can really feel that they’re struggling with the war. Definitely going to keep an eye on this!

Can we get some save slots?

Can the mc use magic

@CookieMuncher Thank you so much for your kind comment

@Big_fan1231 Yes, but I will only implement after the common routes are finalised. As indicated in the first post, I am still toying with stat implementations, and hope to settle that first before including a save system in. Otherwise I will just break it with every update.

@Custodes Yes, and I think it is implied that you can in a few choices. Basically you can wield it well if you have high mental stat, just like the DnD system. The game will elaborate on that later.

It’s a tad weird that the shade dragon comments on how we were a great swordsman when the shadowbane’s paraphernalia is a mage’s staff.

So shouldn’t her comment reflect what the Shadowbane’s preferred weapon was? Or maybe make it more vague- “a great warrior” or “powerful mage.”

Oh and maybe it’s implied by the vaguely dnd nature of things here- but is healing the province of Light magic? Someone might wonder why they can’t have their MC heal the nightingale shifter’s leg ourselves.

Looking forward to more, by the by.

Great demo! I will be looking forward to its further development. Good luck!

P.S. Is that dragon Caitrin?

Interesting, I’m excited for more. I only wish Caitrín was gender selectable.

Enjoyed it. One issue I ran into, I sacrificed my strength for the bridge but it later stated I had watched the Ice Guard due.

Dude the staff is the most versatile tool / weapons options given… it’s cheaper all you need is a long shaft, easy to wield, simple to pick up ( proficiency wise ) but harder to master… what else… and in theory when fighting someone with the same proficiency on the respective weapons provided in a 1 on 1 match the staff always wins… But I’m fond of blades, I lean on the daggers side, I don’t know why but I find it soothing but I’d pick versatility over anything anyday… anyways let me know what you guys think, just remember any feedback is good feedback

Yeah i was surprised to see that too.

@stsword Ah, thank you for spotting that out. The swordman comment was aimed at Wymond, but I also added a comment on MC’s weapon type if you select one of the questions. (Well, let’s hope that I didn’t accidentally confuse the weapon types.)

As for light magic - There is a reason why MC cannot use it at that point of time. I added a option for you to attempt it, and inside it hinted that something is amiss. If you have high intelligence or charisma, you should be able to see those texts. No worries, MC will eventually know how to wield the full lore of light if you choose a certain path down the road.

@Mei_Hiroshi Spot on! Yes, and MC will learn why she joins the dark side.

@Sheena_Felmey Ah, if enough people want, I think I could try to make that happen. (But that might require more beta testing effort later down the road, because I might miss out using ${} sometimes.)

@Dej @rafsan Thanks for pointing that out. I forgot to set the variable, and now it should be fixed!

@Clash_Account I was thinking to be more liberal than DnD’s weapon system, so you are not that limited by the weapon of your choice (like you are still able to do most of things). But that will probably make your weapon choice cosmetic, and I am not sure if players want that. Hm, any ideas?

@MyAccountWasLost Thank you! I will take this into account as well. Perhaps ability stat for checks and personality stat for flavor?

I wonder if this was inspired by Dragon Age Origins, with the parellels between the Darkspawn and the shade, the Morrigan/Alistair dynamic between Mallaidh and Ser Wymond. One of my all time favorite games. The demo is aweseom, cant wait for more

@MyAccountWasLost Ah ok, I’ll keep that in mind. As for the weapon choice, sorry, I seem to forget to update the start_up. Should be fine now.

@Pumpkaboo I admit they are sort of inspired by these two’s dynamic! Dragon age is also my favourite series. The interaction between Alistair and Morrigan is so fun to watch. 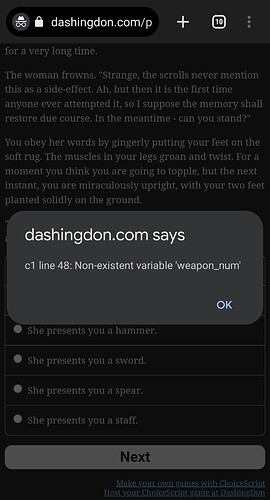 I got this when I choose the bow

@kyle_fiction stat checks are good thing imo, if I don’t want stats to effect my play then I’d want to play delight games

or something like that, those has no actual stats or anything, it’s simply linear story with choices that lead to basic flavour text.

This is so good!! The dialogues, the intrigues, the atmosphere! mama mia! Want more!

don’t go wild for more though