What's is the revenue split between platforms (Omnibus/Google Play/Steam/CoG Website)?

For the Hosted Games published authors, what is your revenue split across platforms (percentage-wise)? I understand that on the iOS App Store, games are published directly into the omnibus app, do know what split of the omnibus purchases is from iOS/Android?

Besides the very popular titles, I don’t see Hosted Games having a lot of downloads directly in the Google Play store and I was curious if the sales numbers reflect that.

Google, Apple and Steam all take the industry standard 30% unless you are a really big publisher.

Wasn’t even aware that was a possibility, updated the title. Thanks!

If I’m reading the question right, are you asking what proportion of sales come from which platforms?

The answer is very much “it depends” as there’s a ton of variation between titles and where their sales come from. For me personally, my sales mostly come from the mobile storefronts and mobile omnibus apps, but that isn’t applicable to everyone. I’m a CoG author rather than HG, but “it depends” still applies!

Yes, I’m curious mostly about what proportion of sales come from which platform. Android is a particular case I’m interested in because it has both the Hosted Games app and the individual games published and I was wondering if most of the sales come from the sales inside the Omnibus app or for the individual apps. My guess would be that most sales from Omnibus, but not sure how skewed it is.

Okay, here are my stats for Fallen Hero: Rebirth up to March 2022 (need to do some bookkeeping soon).

An important note is that this game was released BEFORE the Omnibus was mandatory, thus I have both omnibus and non-omnibus sales even on Apple. 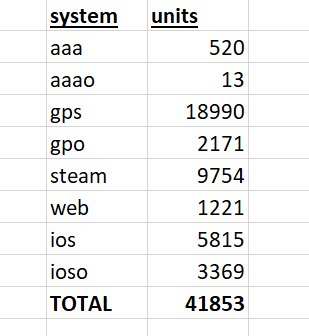 In essence, about 50% of my sales come from Android (gp, and gpo) with the big majority from the single game. Steam and Apple (ios, ioso) split the remainder at less than 25% each. It is interesting to note that on Apple, the Omnibus share is much higher, which might be because Omnibus acceptance is much higher there as all the new games only come out on that platform. The other places it is sold are almost negligible in comparison.

This is super insightful, I was not aware that the Omnibus app was not around when you launched Fallen Hero. That would partially explain why most new popular games don’t have as many reviews and downloads on Google Play compared to the older popular ones. One thing I am confused about is whether the omnibus app pulls its data from the same source for iOS and Android in regards to reviews and ratings.

For example, on my Android Omnibus app, I see that Fallen Hero: Rebirth has 3384 ratings, which I would assume translates to at least 3384 sales (since you can’t rate a game without buying, but buying it does not mean you necessarily finish it). Does that mean that on the iOS app a user would see 3384 ratings or a different number?

If I correlate this information with your table, then clearly I am missing something since, gpo sales are 2171 and ioso sales are 3369.

I honestly don’t know how reviews work. That is platform stuff and an utter mystery.

But I think one thing that complicates it is that I think you can ask CoG to unlock the game on other platforms as long as you have proof you have bought it on one. Which doesn’t register as a sale but would open up for reviews. So some of those reviews might be people who bought it back as an independent game, but then once the Omnibus launched asked CoG to unlock the game for them there as well.

Also, I know that on some platforms, your reviews and ratings are tied to your region, so everyone might not see the same numbers. Which is annoying.

Reviews inside the omnibus are based on the 1-10 rating people give to the game at the end of the game. It’s not connected to the storefronts at all.

All in-game reviews are combined into the info displayed in the omnibus; there aren’t separate tallies for the different platforms.

This is a lot more complicated than I initially thought. I’ve come across many threads where authors say that people give negative reviews, but when I open the story page I see 0 reviews. Region locking might explain that.

Reviews inside the omnibus are based on the 1-10 rating people give to the game at the end of the game. It’s not connected to the storefronts at all.

Yes, but if the game is not free, then the only way to review it is to buy it, ergo in the Omnibus app number of ratings <= sales for that platform’s omnibus, because if a user buys a game, it does not necessarily mean, they have finished it.

All in-game reviews are combined into the info displayed in the omnibus; there aren’t separate tallies for the different platforms.

So that means everybody sees the same rating + number of ratings in Omnibus, regardless of platform.

Also one can skip the rating even when finishing the game.

Edit: I should note that, like Malin, most of my sales were made pre-omnibus, so the “O” percentages won’t be representative of games that got their launch anno omnibi.

For CCH2, which was released just as we lost our ‘standalone releases’ on Apple.

Looks like we all have approximately equal percentages! So that sounds it might be a fair assumption, at least when it comes to Google Play - Steam - Apple.

No Steam for my games, and Amazon has something like one sale so far

I think the reason for iOS dominance in my case is a combination of several unusual factors… Mainly the fact that several negative issues occurred specifically for Google Play Store to crush my sales over there:

But yeah, my results so far are probably far from the norm. I think my 3rd HG release will likely have a much better success on Google Play Store for a change.

@Eric_Moser What’s your breakdown for CCH 1? I’m sure omnibus is much more minimal since it was an older release.

Here’s Nuclear Powered Toaster from October 2018 to June 2022, to show the darker side of things.

On at least a somewhat brighter note, there’s The Parenting Simulator, with this going from September 2019 to June of 2022.

Amazon- 165
Amazon Omnibus- 19
Google Play- 7,634
Google Omnibus- 1,613
Steam- 3,184 (this did not release on Steam until about 9 months after it initially came out, and like Toaster, it tends to grow more now than the others, although the other marketplaces having a head start means it will likely be at least another year, if not more, before Steam surpasses iOS here. Google might not ever happen).
Website- 919
iOS- 3,940
Total- 17,474

Really going to miss Steam for my third release. It’s good for the tail, plus I love the achievement data it provides. But who knows? If it does well enough, it might happen later, as Parenting did.

Before I made this post, I grossly underestimated how many people install the stand-alone games on google play, especially after the launch of Omnibus. I only download Hosted Games on Omnibus so seems like I’m the minority

I had a hunch that NPT sold relatively better on Steam since when I played it, it game gave a classic PC adventure game vibe.

Another interesting thing to see is if iOS users tend to buy more games than Android users (generally, that’s the case for most apps). I’ll have to crunch some numbers first because as of June 2022, iOS devices account for 27% of the mobile market.

I’m a bit surprised to see it too; I never look at percentages, just the totals on my spreadsheet. I really thought the Google omnibus mattered more than it did for TPS, especially since it had already been out a few months by the time that story released. But I guess we do have to remember that an omnibus app is just like any other app, getting adopted more and more over time. Newer releases like Zaldath’s pair are going to get a higher percentage of omnibus buys because for him the omnibus app has been out for years to get established before his story hits. Not true for Malin, Joel, Eric or myself. I’d love to see some other 2021 and 2022 releases have their numbers put in here for comparison. Of course, I’d love to see more sales data in general. It helps to know what the public really wants (and what they don’t, while sometimes a bit harder to hear, is still helpful too).

Also I’m the same in only using the omnibus, but that’s out of necessity: I’m an iPhone lifer. I still have a couple standalones on my phone from games I got in 2017 when I first found this place, but otherwise it’s omnibus or omnibust.

Nice of you to say. Toaster got burnt bad, but I’ll always have soft spot for it. Maybe when I’m retired and have time to kill I’ll write one of the many sequels I had charted out as a standalone novel or something.

I know iOS used to be a much bigger piece of the pie here before we all got relegated to the omnibus by that infernal template-based app rule. But I couldn’t speak to whether iOS people in general buy more apps overall.