What's is the revenue split between platforms (Omnibus/Google Play/Steam/CoG Website)?

After my vague comment above, I had a poke around in my numbers - here they are:

Pretty similar, though Creme has a greater proportion on the Android omnibus which will reflect the omnibus having been around for the whole time since Creme was released. For both, Android is more popular than iOS and the mobile platforms/apps combined are more popular than all the other storefronts. Steam isn’t a very high proportion for my titles, but it tends to fluctuate more month to month more than the others with stuff like being in Summer Sales, etc.

I wanted to make a comparison and see if iOS users spend more on average than Android users and the data seems to show that. Keep in mind that even though total revenue for most of the games posted here is higher for Android than iOS, Android users outnumber iOS users by aproximately 4:1 - 5:1. Below you will see a graph with the market share of mobile platforms from Jan 2017 to Jul 2022 (I know some games are older and some games are newer, but I’m interested in an average) 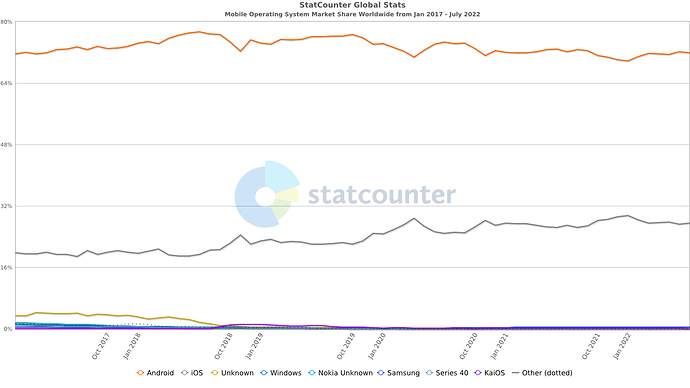 iOS market share ranges from roughly 18% to 27%, so for a weighted average I’ve chosen 22%. After that, I calculated the total mobile units sold for each game by adding Amazon, iOS, and Android. I’ve then calculated the percentage of revenue each game earned relative to the mobile market total.

So for example, for Creme de la Creme, you could say something like “Despite iOS users making up only 22% (weighted average for the selected period) of the mobile market, they made up 43.20% of the revenue”. Please note that this is just an estimation since the distribution of users consuming CoG/HG content might be different than the platform split.

If you look at the percentage of ios users in let’s say the US, that’s a bit over 40% tho. Rich countries have more ios users and thus buy more games.

That’s an excellent point! The same site where I pulled the previous data says the number is higher than that, it’s around 55-60% for the 2019-2022 period.

@quartz Yeah, overall iOS users spend considerably more money (even though the audience is way smaller than Android). It’s probably because iOS devices are much more expensive in general, so it makes sense users would be more eager to get more out of it by spending more on apps etc. As well as just having more spending power in the first place (to be able to afford such devices!). I’ve also heard that there’s more of an ad-based culture on Android (due to Google’s preference for ads) so that could be a factor for the reluctance to pay too (since it’s not as standard). On the other hand, Apple/iOS customers are used to paying for lots of things and valuing privacy/ad-free experiences more

I know I’ve paid for many apps to remove ads on iPhone, whereas Android users are probably much more tolerant of ads on average. 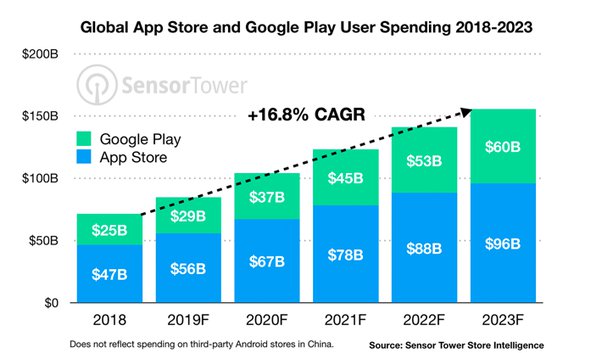 (note: Android uses other app platforms besides Google Play Store though, so this chart is a bit biased)

I will post that info later today; yeah I’m thinking 80% of its sales were before 2018/Omnibus.