Warriors: A Darkness Within WIP

Oh dang I’ve never been more hyped! I love this, and all of your projects actually

The Shadowclan kits now have a (hopefully) full list of names.
Four new (uncompleted of course) scenes, & name change for another scene - th/sh/riv/wi/sk-appstart (these are the scenes where you become an apprentice. Their only purpose is to start your apprenticeship, since warriors and medicine cats will branch off)
Bug fix - now you can sneak out of Thunderclans camp!

Big oof,the situation a loner-born Riverclan mc is in hits me hard.

Not gonna say much, but loners, kittypets, & rogues will actually meet their families later.

The prophecy plot point will be interesting.

Shadowclan is going to be a bit difficult for the 1-3moons & 3-6moons, since theres 2 different mothers, but it should be similar to Thunderclan (practice skills, spend time w the medicine cat, ect)

New stats!
Peaceful vs Fighter - works with charm or battle skills/strength, shows whether you use words or claws
strc (Connection with Starclan) - especially important for medicine cats, this shows how likely Starclan is to talk to you & u listen

Also going to write one of the Thunderclan elders stories (two of the stories carry over into every clan’s elder choices)
Edit: Lionstars Story is done! Probably won’t get anything uploaded til the end of the week though.

All clanborn cata have coats randomized based on their parents. I’m not sure I’m going to take away the randomizer though. Adds a bit of fun I think.

& can you tell me which parents you had but which ones they switched to?

If you play as kittypey, rogue or loner you get to choose what your character looks like.

The randomizer is great, I was just a bit confused, because some people talked about choosing their appearance, thats all.

And regarding the switching parents: The first picture are the parents before I looked at the stats and the second after I switched back. 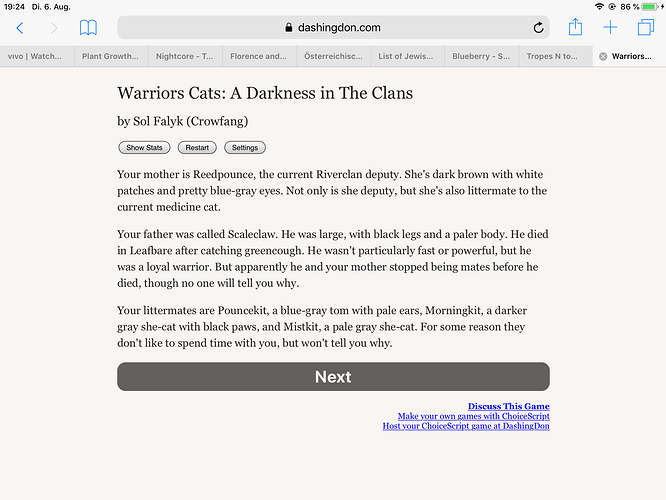 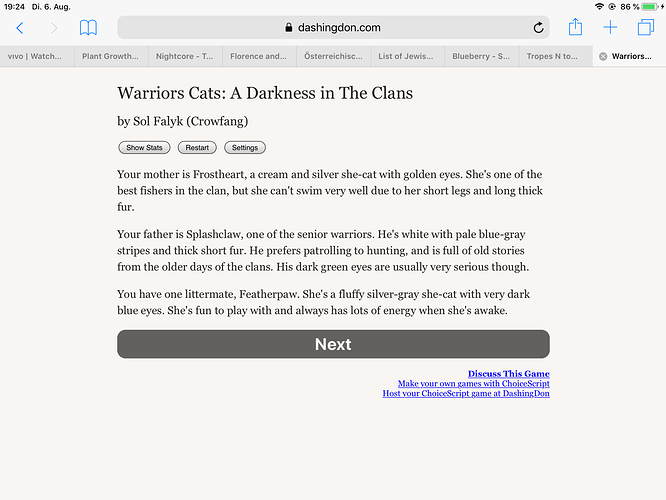 Oh, it may be randomizing it because you’re reentering the page where the randomizer for your parents is.

I’m not sure if thats really a bug or not. I’ll check my code & test it from the IDE & see if it does that

Edit: I think it’s changing it because you reentered the page where the randomizer is. It did the same thing with my copy but there’s no error

Ahhhh😅 that makes sense, thanks.

Welcome ^^ I didn’t realize it would do that XD

Mate choices are beginning to make an appearance! Granted, you won’t be able to pick your mate until your a warrior, but you are starting to gain some friendship with certain cats. Mate choices for other clans will be listed later

From Thunderclan - Whiskerpaw & Stagfoot
From Shadowclan - Ferretpaw, Thornkit, Swiftkit, & Runningkit (for SC, you cannot be raised as their littermate to be their mate, there wont be any option to ask them)

Are mate choices restricted to your character’s gender?

Yes, at least at this time

Seeing as Reedpounce seems to be an abusive,or at least a bad parent to the loner-born MC (“Sometimes she’s nice to you and other times she sends you away with a harsh hiss.”) honestly makes me wonder if she’ll face consequences for this based on your choices.

She might eventually. Her (along with one of the other mothers) were actually told to raise you. It’s like Lizardstripe with Brokenkit. She didn’t ask for him, but she raised him anyway because the clan leader told her to

That’s a big oof. Makes me wonder what the leader is like.

Question, will there be Half-Clan cats?