VERSUS: The Elite Trials — Infiltrate the Elite gods, or turn double agent? 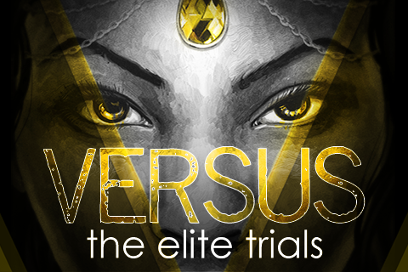 We’re proud to announce that VERSUS: The Elite Trials, the latest in our popular “Choice of Games” line of multiple-choice interactive-fiction games, is now available for Steam, iOS, and Android. It’s 25% off until January 2!

Will you infiltrate the gods’ Elite Courte, stealing their superpowers, or turn double agent and join them, taking your place among the divine?

VERSUS: The Elite Trials is a thrilling 140,000-word interactive novel by Zachary Sergi, author of our best-selling Heroes Rise trilogy. Your choices control the story. It’s entirely text-based–without graphics or sound effects–and fueled by the vast, unstoppable power of your imagination.

In this sequel to VERSUS: The Lost Ones, as one of the prisoners trapped on planet Versus, you must vote for who will fight in deadly gladiatorial battles. Thirteen prisoners have formed a voting bloc, the Elite Courte, to ensure that they choose who lives and who dies.

But one of their so-called “gods” has a plan for revolution. Your power to steal superpowers and memories makes you the perfect spy–or the perfect double agent.

MemoryTravel through time and space–keeping one step ahead of the enforcer agents who want you dead. Play the gods against each other in games within games. Design your own planet in the halls of the gods.

On Versus, nothing and no one is as they seem, perhaps not even you.

We hope you enjoy playing VERSUS: The Elite Trials. We encourage you to tell your friends about it, and recommend the game on StumbleUpon, Facebook, Twitter, and other sites. Don’t forget: our initial download rate determines our ranking on the App Store. The more times you download in the first week, the better our games will rank.

I saw an option to restore the purchase, right under the option to buy it. I don’t know if it works, though.

I tried it and it didn’t work.

You have to purchase the warning bird for the second story separately - at least on Steam. story 1 + bird 1 story2 + bird2

The hints for each game are a separate purchase.

Yay im so excited! But i have a question. When/will this game be available for purchase from the CoG Web-store? I think its silly that i get redirected to steam when i try to purchase the game, but i can buy the bird hint from the webstore…

Holy crap. Zach, this is your writing at your best, by miles. I’m so impressed and happy with my first playthrough. Easy to roleplay, lots of options between the binary order A and B, and the challenges were really fun. And the worldbuilding finally felt natural (yay!).

Chose a neutral path, made a utopian planet, Breeze died, got snuggly with Oli. I’m a bit disappointed I had to ditch Otherboard for this and that Breeze paid the price for Venuma’s ambitions but that’s the price, I guess. Made it my official goal to stay neutral, get MamaNa to kill the bominate and then take her scheming ass out. I want total anarchy on versus, damn it. Venuma is too big for her britches, Ashe is a dictator, and MamaNa is an absolute snake. I have never hated a character as much as MamaNa.

Looking at the achievements though, it seems like you can discover the identity of the person you know from your created planet. How do I get to that? I’m so convinced I know who it is but I can’t tell for sure, or how I would begin to get there.

Gonna try a second character where I side with the rebels, since my neutral character was about equal with siding with MamaNa

Edit: on bonus thoughts I suppose, I was kind of pleased with how Oli’s romance turned out. I was expecting their romance path to strong text]be more erotic/exploitive given the undertones in the first book of flirting with them, but then you meet them in person and they’re just sweet and backing off from the player rather than the reverse. It felt fresh and ending with a hug was cozy. I’ll probably chase after the Venuma/Breeze polymance next on my rebel character out of sheer curiosity; regardless, seeing how each character had their own preferences (even for gender-neutral characters exclusively!) made me happy to see. And I ship Gadget and Lockdown. Give that sweet man some pink dragon love, already.

Looking at the achievements though, it seems like you can discover the identity of

OH! I remember who it is! I’m curious who you think it is. The name of the achievement is a huge clue on how to get it.

[details=SPOILERS BELOW!!! ]Alternate Ending: Fiery Fate - Learn The Identity Of The Creashon You Once Met

If you want a bigger clue

If I remember rightly it’s knowledge you get only if you die. I think it’s near the end. Possibly Queen Ashe and when she does a mind-thingy to you. If you fail that and die! (Proper dying GAME OVER) Or maybe not, my memory’s fuzzy and I don’t own the game to check.

MamaNa makes me think of

LOL. I didn’t even know that was a possibility, that’s interesting. Thanks for the tip!

I personally think that it’s Oli. I actually pursued them explicitly because they stood out to me as a mystery. Mirror on the wrist rather than the cheek, the feeling of being “familiar”, the fact that you can explicitly pick their gender and their skin color(???) all really stood out to me. They don’t seem like they’re Priscan, yet they know about Dhanthik, pronounce Hir name slightly differently, and know a bizarre ritual with the mirror path that somehow has never been practiced by the super open Priscans… even if they’re not the Creashun, there’s something super weird about Oli that hasn’t been revealed yet.

That or Gloves and we’ve ‘met’ them according to Everly’s somewhat absentminded grasp on time.

[details=SPOILERS!!!]Yeah that’s the answer I wanted it to be. I thought that Oli would make by far the most sense. I still have hope! And it would make so much sense of our ability to create Oli as perfect for us as we want in the game.

Nah! That’s cheating and would be disappointing!

I won’t spoil it though.

Did anyone get all the Echelon achievements? I’m really curious about what’s going on there.

If I romanced Breeze in Part 1, but want to break it off in Part 2, is that possible? I tried a couple of times, but I keep getting automatically committed to that path.

Sped through to find that answer… honestly I had completely forgotten about that person by that point, haha. I’m half mad and half impressed with how well their identity ties into the whole question of divinity and individuality, and it wraps up the crisis/affirmation of faith storyline that the MC has going for them quite nicely. Still feels something like a red herring. No way thats the end of it.

@Scribblesome I’m working on it now! I’ve gotten four so far; 3, 4, 6, and 7. If anyone wants to be spoiled, we could always band together and reveal what we’ve found…

@Bootsykk I forget how, but I also found 5. I think they are tied to certain routes? PM me or something if you want to collaborate. I’d be glad to try and help.

I got the first 5, i think? But maybe you have to get them all to unlock some secret thing.

I just wanted to hop in and ask, will I see any more of baron Airon? I wanted to romance that a.hole, but he got his butt kicked out in the first trial. -.-

Well, if you side with the Courte in the end, he gets killed in the next Versus match. So you’d need to get one of the other endings to be sure of seeing him again.