This Blood of Mine (WIP) Last Updated May 3

Why is everyone calling miss Sophia “madam chaos”

because that’s who she is: the one and only madam chaos!

Why is everyone calling miss Sophia “madam chaos”

That is the lovely nickname that @Jesus gave to me. Aside from that, the people still have a grudge on me since I broke their hearts in Kingdoms.

I broke their hearts in Kingdoms.

is kingdom another work of yours?

That is the lovely nickname that @Jesus gave to me

that somehow reeks of sarcasm

is kingdom another work of yours?

[image] I’ve began working on my first project titled Two Kingdoms. It’s my first time posting a demo here in the forum. it is set in medieval ages, but I added magic stuff.

Summary: In the west is Lucraex, and on the east is Darvis. After 3 centuries, the war between the two countries hasn’t died out yet. To put an end to the severe war, the two countries’ royal families set a marriage contract. But that pact failed years ago. This time, It is you who will wed the enemy… There are …

then let’s see why they named you “madam chaos”

When alyssa says that she talkes to clyde i get this error: chap1 line 1623: increasing indent not allowed, expected 0 was 2

@Sophia will you appear in this work aswell, miss sophia?

quick question: will we be meeting our dad later on?

@Sophia will you appear in this work aswell, miss sophia?

quick question: will we be meeting our dad later on?

But to answer your question, yes. 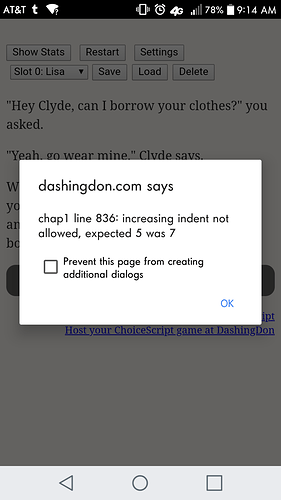 Error when asking Clyde for his clothes as a female who attempted to push him into the river and failing. I think I’m going to love this WIP!

But to answer your question, yes.

(Coughs)
Can one of the options be once we meet him

“what? You thought we were going to have a sentimental reunion?”

“HAHAHA, get in line buddy because there are a hundred men I would gladly call my father before ever getting to you”

PS: so this is how @rose-court do the big words she like to use so much…I don’t like it.

Does it end here? orjust bug? 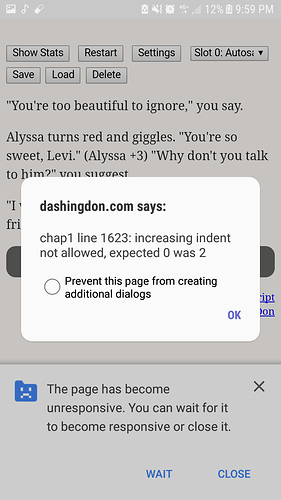 A bug but there is only a line after that and the end.

lol
You can make them a teensy bit smaller, if that’s more to your liking.

Ok, enough off topic for me. Back to your regularly scheduled programming!

Miss @Sophia could it be that you like love triangles, the end of this scene was at the best moment I am waiting for the next to happen kudos for you