An insurance adjuster, armed with an Arcane Forensics degree and surrounded by a group of loyal colleagues, investigates the strange events unfolding in Universe, a city transitioning from flintlock pistols to magic-powered Automations.

Currently sitting at roughly 20 thousand words (~11 per playthrough), this serves as an introduction.

Very excited for your feedback!

UPD: Following the completion of the first draft (~50k words per playthrough), I’m taking a break from this novel to figure out whether to continue it or not.

I cannot edit my own post since I’m a new user. Please ignore the “you play as” start since it makes the sentence ungrammatical.

Edit: removed the cover art since it was blocking the edit
Edit 2: ignore this message, I’m really new at this forum thing

@msworn – I made your first post a forum wiki, so you should be able to edit the post going forward.

Once you achieve Trust Level 2, you should have no issues editing it.

If you have further questions, please contact the moderator team at @ moderators (remove the space between the @ and the moderators), or dm me if you desire.

Oh, thanks for the heads up, didn’t realize you need to init the plugin for it to work on Dashingdon.
Should be fixed now as long Dashingdon doesn’t serverside cache the file like it sometimes does 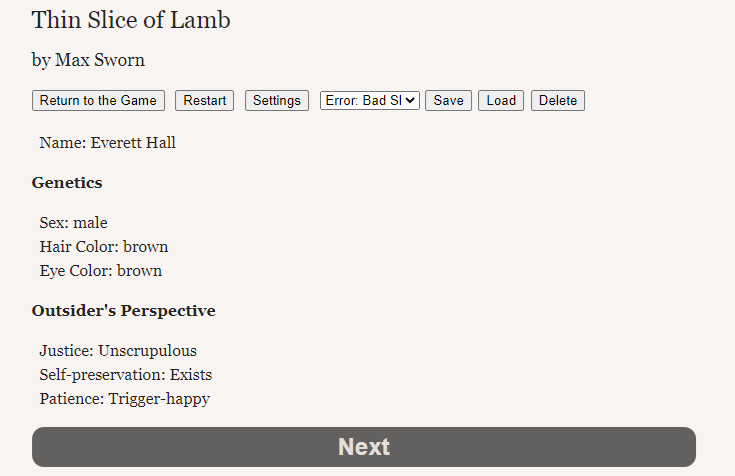 image735×476 13.8 KB
Hi! I found an interesting bug, if that’s truly a bug. As I was reading the first few pages, I chanced a look on the stat screen and I thought I had to be playing an established character. That impression lasted until the customization part.
In any case, I’m enjoying myself a lot, that’s an interesting setting you got here - any chance of a codex?
I hope you’ll continue.
1 Like
msworn January 9, 2023, 9:14pm #7

Thank you for the feedback! I’m glad you like it, and I assure you that I’m planning to continue. A codex is a possibility.

There was definitely a bug, but I’ve already fixed it. It looks like you are still seeing the old version of the startup and stats files from the Dashingdon cache. I think it should resolve automatically after a while. Hopefully, this doesn’t detract too much from the experience.

Anyway, that all aside, the setting seems pretty interesting and the characters likable, so I am interested to see more. I wasn’t too sure what to make of the premise of being an insurance agent (it’s an oddly mundane occupation for an IF protagonist), but after seeing the concept in action, I think I do see some interesting potential in the concept of ascertaining whether or not an incident qualifies for the MC’s support. You’ve got me curious to see where the story goes from here, at least.

Awsome reply! Very good points, especially on gender, can’t believe I didn’t catch those. The money stat is planned to be a little bit of a slow burn that doesn’t really come into play at first.

Something came to my mind as I finished this game and then code-dived.
As per the request for feedback, I’d like to mention that readers of these books, from what I noticed, tend to want their MC to do things (competently at least sometimes) and to feel they have some agency every now and then.
Right now MC isn’t terribly special - and probably won’t be, and that’s alright - but they should have something going for them, some kind of strength or this company would be better off if it run itself.
Anselm has military experience, Jeremiah is uhh charming? and a genius if he wants to be and Ophelia’s the marketing including being an artist.
MC can be soft hearted, but that seems to be a hindrance and very brave - but that’s not an unique trait (and Anselm has a gun, so suicidally throwing yourself at danger only seems to make him worried, he’ll be fighting the fights here).

What can MC do? Why are they in charge? They have to have something, other than the ability to make decisions. Right now there is no mechanic for any such trait and Jeremiah seems to be rather right that they could take over their job eventually.
By the way, will the gameplay be about refusing or taking claims or is there another mechanic you are considering?
Final note, I have to be honest about the writing and pacing: it’s brilliant. The characters are also very likeable and well integrated with the plot. I hope I didn’t put you off with the rant above.

I feel you. I also wonder how much of what you’re saying is due to me being in the minority of people who just want to get lost in a mostly premade story with dynamic elements and solve mysteries as opposed to answering open-ended questions in an elaborate fictional world. Not to say that the two can’t co-exist, but the way I see this continuing — the accent is heavily on the former.

By the way, will the gameplay be about refusing or taking claims or is there another mechanic you are considering?

To be honest, I’ve never even thought of it as much of a game mechanic, I just want to take the reader for a ride. Your company balance defines your options a bit later in the story like any other decision with long-term consequences.

Final note, I have to be honest about the writing and pacing: it’s brilliant. The characters are also very likeable and well integrated with the plot. I hope I didn’t put you off with the rant above.

Thank you! You didn’t put me off at all, it’s fine. I see where you’re coming from and I think your criticism is valid and I appreciate it. I hope I didn’t come off as dismissing your concerns.