The Unwanted Warrior recounts the story of a bastard who has the ability to communicate with animals. Will he/she use this power for revenge or peace?

Can I become the King?

Can I become the King?

Just letting you know, we never input our name in the demo, so everyone just calls us “name”, hahaha.

I like story about bastard.
This are mistake that I found: 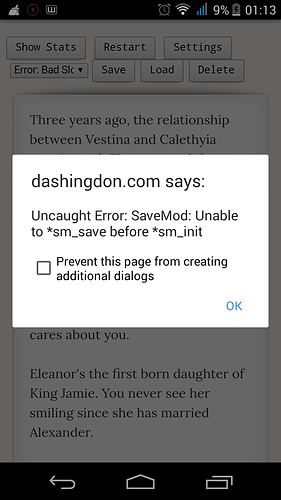 Question I have is just one, can mc just have peaceful life?

I love the black sheep of the family type characters so you’ve already got my attention BUT I’m absolutely sold by the fact that I can romance my jerk brothers wife. I can’t wait to sweep her off her feet!

this song will hit my mind each time I enter this thread, heh. I like the idea BTW and I like how this is more of a magic/ fantasy book rather than a standard kingdom conquest sort of thing due to the ability to talk to animals sort of like snow white when she was treated as a servant and an unwanted heir to the throne as well as being pretty (she is not pretty).

Just letting you know, we never input our name in the demo, so everyone just calls us “name”, hahaha.

It’s weird because I choose to stay with little sister, I can’t resist her

Well, that’s a bug. I’m working on fix that mistake.

I can’t save the game

Question I have is just one, can mc just have peaceful life?

found an error when i was asked to choose my gender

Went on the hunt, didn’t kill the deer. It said I dismount my horse when I should be mounting it.

I don’t care what happens to the rest of the family, but MC’s baby sister has to stay safe

That gave you a weird satisfaction.

Well, yes…but I’m also feeling a little bit bad… I don’t want to use a six year old to get back on MC’s other sister in anyway…that’s just low…just because MC is the black sheep of the family doesn’t mean that little Leo must have a bad relationship with them. That could affect her negatively in the long run. (And I’m sure it will come back and bite us in the butt too that most of the family disapproves how we treat Leo, no matter how good meaning we are…

You like her and you let her know your feelings.

I got confused for a moment until I noticed that with like you indicate something more as just “like”. I take this that there won’t be friendship paths in the same way as there will be romance paths?

I btw would put the name question a little bit later in the game, just to get a feeling for the game world and what kind of names would fit a MC here…(I mean it’s not that bad in this game but imagine this would be a world with names like in Lord of the rings and I would end up calling my MC…Steven or something…it would be funny but unintentionally

And now I got a bug…Wasn’t there before… 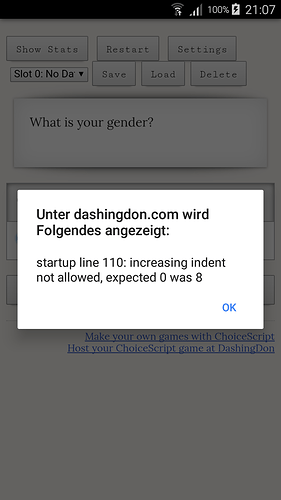 Um…
Are you by any chance the Nutella Queen from Twitter? HeyItsChris?

And now I got a bug…Wasn’t there before…

Are you by any chance the Nutella Queen from Twitter? HeyItsChris?

Nope, I’m not that Nutella Queen.

found an error when i was asked to choose my gender

That error is fixed. I hope there are no more errors, because I starting to get crazy

You lie on your back, staring at the ceiling. You still think about what has happen in forest.

The outside of castle’s dark and cold, the chill in the air began to clear your head. What that voice was belong to? Was it deer? Did you hear its voice?

My MC wasn’t in the forest…They talked with a bird (which I already want to adopt), while trying to ignore the queen.

(And I think there should be a “the” before deer, too)

Eleanor is really beautiful woman with long brunette hair_cascades over her shoulder and her high cheek bones.

Add a which for the _

My MC wasn’t in the forest…They talked with a bird (which I already want to adopt), while trying to ignore the queen.

(And I think there should be a “the” before deer, too)

That’s not bug. That’s my laziness

I will fix those mistakes in the next update. Also thanks for finding mistakes/typos. They all will be fixed tomorrow.

Love it! I can’t stand the queen but I love the little sister!!

When you get to pick a name for your horse it says house instead of horse. Loved the game so far an looking forward for more!

Oh… That’s embarrassing… I will fix it in the next update. Thanks