The Choice of Games Community -- a joke I made on Reddit

I’m curious, what are some stereotypical things you’ve seen among certain groups of fans in this community?

I feel called out

One meme to own them all.

that’s why I usually avoid Wayhaven, Hero Rise and so on lol

You’re missing having different political opinions than the local consensus.

Let’s try to keep this about funny memes rather than it being a complaint thread, if at all possible. Not that we’re complaining, just wanna get ahead of that.

Funilly enough the Reddit community is less toxic lmao, worst thing that can happen is a “ok, but why is that so low or so high tho”

But do not trashtalk Slammed! That’s the Morbius of Interactive Fiction in the sub and you will be put down if you say something against it

The Heroes Rise one is pretty accurate for me. Some people really seem to have a hate boner for those games and I have no idea why.

Yup. And I’m aware of their flaws, I understand why they might not be everyone’s cup of tea. Fine. But the level of vitriol they evoke is just ridiculous.

Lol some of these are funny I love this one cause me and my ex use to play all the time.

I have solved the problem.

They really REALLY dislike Railroading, and Heroes Rise seems (note : i never played heroes rise) to have fallen too much into that, which caused people in there to dislike it more than usual

Congratulations sir, do not fall into the circlejerk cesspoll known as Reddit for your own mental health

Actually, the most vitriolic HR-hate I’ve seen was on this forum.

Well, its definitely not the 2 Minutes Hate kind of vitriol.

I’m in this meme and I don’t like it.

Also, TIL that COG has a sub

Slammed! is so underrated. I have no interest whatsoever in wrestling (or any sport, really) but it is and always will be one of my personal COG favorites. So, yeah, I’m always ecstatic when I see it getting the love it deserves.

I hope it’s okay to include my own meme.

This is me when I’m hung up on specific MCs: 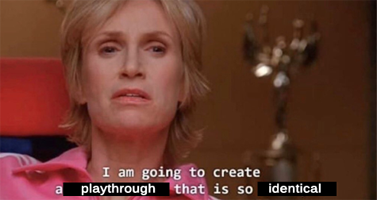 HG also has a sub, but I can’t tell if it’s really 2 separate subs or just 2 HG subs.