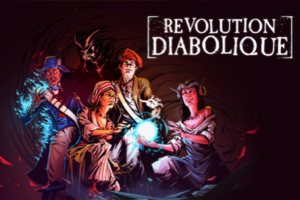 We’re proud to announce that Revolution Diabolique , the latest in our popular “Choice of Games” line of multiple-choice interactive-fiction games, is now available for Steam, Android, and on iOS in the “Choice of Games” app.

Summon demons to win the French Revolution! Will you uphold the Republic, restore the monarchy, rule France yourself, or lose your head?

Revolution Diabolique is a 425,000-word interactive dark fantasy novel by Chris Conley. It’s entirely text-based, without graphics or sound effects, and fueled by the vast, unstoppable power of your imagination.

As a demonologist in eighteenth-century France, you study the world’s most dangerous forbidden magic in the safety of your provincial estate. You can summon forth a breathtaking variety of demons: some creep subtly around your enemies to confuse and distract them; some appear as terrifying monsters; some guide you towards unlocking even deeper secrets of the universe.

Now that the flames of revolution are beginning to kindle, you cannot hold yourself apart from politics for long. Every faction—monarchists, republicans, peasants, intellectuals, anarchists—would love to benefit from your power. Where will you send your demons? Will you unleash their power on the battlefield to aid or hinder the Revolution’s armies—or march on Paris itself? Will you lead a political faction with the secret knowledge that you have gained? Will you inspire a new cult dedicated to demons?

But all power comes with a price, and as you rise up, you will need to sacrifice something: your reputation, your fortune, your safety…or possibly even your life.

When the dust clears, will it be you who rules France?

• Play as male, female, or nonbinary; gay, straight, bi, ace, or poly
• Rise to lead a faction of monarchists, aristocrats, peasants, or humanists
• Use your magical might to change the course of history - or to take down your personal enemies
• Build a palace to rival Versailles
• Bring the study of demonology out of the shadows and into France’s loftiest salons and universities
• Crush rebellious provinces with your demonic and military might—or join their uprising against Paris
• Pursue romance amid the Revolution with a Parisian professor, a decorated military veteran, or a mystical philosopher
• Lose your head to the guillotine—or use your magic to transcend death itself
• Enjoy twenty full-color character portraits

We hope you enjoy playing Revolution Diabolique . We encourage you to tell your friends about it, and recommend the game on Facebook, Twitter, Tumblr, and other sites. Don’t forget: our initial download rate determines our ranking on the App Store. The more times you download in the first week, the better our games will rank.

Congrats, @Chris_Conley! I have been looking forward to this since you had your WiP thread open.

I’ve only starting reading, but I’d just like to say how stoked I was when I saw Vietnamese as an option and the names with the punctuation marks! I acutally gasped out loud. I just, I’m so happy. I don’t get to see SEA as an option often and much less when its specifically Vietnamese.

My birthday is sunday. This feels like a present

What skills do I need to get the librarian demon?

YaY… Congratulations on the release @Chris_Conley.

can’t see it on play store

Do you mean the Google Play Store?

The title doesn’t come up when you search, but if you go to the store page for Choice of Games, you can find it there.

This link worked for me.

What skills do I need to get the librarian demon?

Most tested attempts in this game don’t require one specific skill. Generally, each task requires a couple or a few decent level skills, or one high-level one. This particular contact/summoning is more difficult to pull off than past demons, so you have to pass a multi-stage test, but that also gives you a chance to roll earlier successes forward into the final test.

Congratulations on the launch!

Though here’s a funny result for everyone. I’m writing a constitution with the anarchists, and guess what they want?

France will once again be a Catholic nation, enforced by law.

Code-checking: is extremist rhetoric supposed to mean more Catholicism, or the reverse? Because I seriously radicalized the freethinkers and that (combined with their love of the paysans) seems to be part of what led to the freethinkers becoming theocrats.

Code-checking: is extremist rhetoric supposed to mean more Catholicism, or the reverse? Because I seriously radicalized the freethinkers and that (combined with their love of the paysans) seems to be part of what led to the freethinkers becoming theocrats.

Ooh, that’s a good find, thanks! You’re right, their religiosity is incorrectly being initialized from their extremism, rather than the reverse. I’ll send in a quick fix for that and a couple of other issues today.

Is Mauriceau’s gender random? The first time I played, he was a man, this time she was a woman.

Having restarted the game more than a dozen times, I will say, that I believe they are actually gender-neutral, but the pronouns are random.

Is Mauriceau’s gender random? The first time I played, he was a man, this time she was a woman.

That’s right. Several of the important characters are, in this story.

How do I raise Stratégie et Tactique??? Do you have discord

Patch is pushing right now. This addresses several of the bugs, specifically in chapter 7, that have been reported.

We’ve heard rumors about gender errors, but no one has sent in any bug reports on that; if you encounter a gender-flipping error, please send in a screenshot!