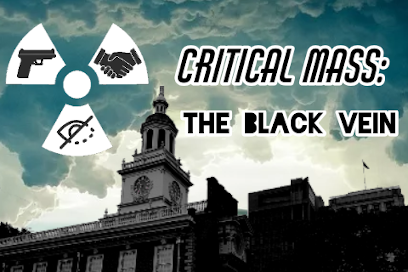 They say the world ended a hundred years ago, yet it still turns. In the century since, Philly has been torn apart by rabid monsters and rabid men. Highwaymen, slavers, and militias have carved up territories and claims, while simple villages suffer their wars. You are a simple wanderer looking for work. That’s why you’ve come to the Daughters of Liberty. But a simple scouting job is about to take a turn for the strange, sending you into a spiral of mysteries, intrigue, and brutality. Will you stand by the Daughters? Or will you fight to bring the fire of civilization to your home?

Critical Mass: The Black Vein is a 108,000-word interactive novel by Michael Meillarec, the second in the Critical Mass series. It’s entirely text-based, without graphics or sound effects, andfueld by the vast, unstoppable power of your imagination.

Michael developed this game using ChoiceScript, a simple programming language for writing multiple-choice interactive novels like these. Writing games with ChoiceScript is easy and fun, even for authors with no programming experience. Write your own game and Hosted Games will publish it for you, giving you a share of the revenue your game produces.

Congrats for the release!

Honestly I didn’t know there was going to be a sequel for the (now) first book so, this was a surprise!

Congrats! and surely I will check this out!..Cheers! Is this game not available on Steam?

Hate all the factions.

Everyone outside of Dutch Hill and the Black Vein settlers are out of their mind and throughout the entire play through I found myself questioning why I had to associate with any of them. That poor guy from Dutch Hill, I think his name is Dwine? I don’t know why he shown any gratitude for me dragging him and his people to this shitty war, so he could involve himself with these terrible people.

Also I somehow simultaneously felt like the pivotal catalyst between success and failure for whichever faction blessed with my loyalty while not being significant to the narrative at all. Your only choice is between whose orders you want to follow. I am not even sure what the character does when the story is over because the protagonist’s role seems like an afterthought.

Yeah, it felt like the MC had to chose between two… When the MC is in the middle of both factions, the MC just have those two options, side with one of them and it was a bit forceful. I wish it had an option to be more neutral or at least, to uncover all the shit with the slaves and the faction implied with that.
In general, it’s a good game with an entire world well planned and well written characters, I enjoyed playing it. So congrats for the release @Michael_Meillarec

Can’t we import our saves in the first one?

I’m trying to play after paying and get an error.
“Error: Couldn’t load scenes/6-ft-wash.txt.json The file is probably missing or empty.”

How is this possible on a published game?

@mschlor I’m afraid that this is an issue that is beyond the scope of what the forum can help with. In this case, you should contact Hosted Games directly by sending an email and screenshots to support@hostedgames.org.