My name is Ian, and I have completed writing a final draft on a story which I would like to sincerely ask everyone to lend a hand. I love Interactive Fictions and some excellently written Host Games inspired me to write my own. This is my first time writing so, in advance, I want to thank you all for the support and tolerance of my lack of experience.

The game Path To Knighthood, is a rewriting version of one of the most popular childhood tales we have all heard of - A brave knight riding on a white horse and saving the princess from the dragon. But the tale takes a mildly darker turn with magical encounters and unexpected twists. To put it simply, the story is a Mild Dark Fantasy of it.

For the choices, I try to make them more Witcher-like, more focused on depicting and immersing into the story and weighing the options and moral choices, rather than focusing on RPG mechanics. To me, it is more of a story than a game.

Currently the story is about (95%, 15 Chapters, 240,000 Words) done, and I plan on submitting it to Hosted Games after this open Beta. The story passed quick test and random test so you should have a fluent experience.

All comments are welcomed, though high and low levels instead of mid-level errors are MORE welcomed. And I would like to quote from another post from the officials explaining them:

I am aware that a homosexual romance option may be nice. It is not available yet but is on the to-do list already. It would be especially great if you have comments focused on the following:

Thanks! Its fixed right away!

Honestly, there’s a lot of weird writing on almost every page that would take a lot of time to point out. The writing “screams ESL” if you will, though it’s still on the competent side. By that, I mean that the mistakes, while still jarring to someone used to native-level writing, are not filled with glaring, blatant mistakes that make you want to stop reading after one paragraph (those kinds of WIPs happen). It’s perfectly readable, and I found myself enjoying the story itself, but people WILL give you negative reviews on storefronts if you ask money for the game without fixing the writing first. It already happened in the past with other games from ESL writers. After all, this is a text-only game, so if your text is subpar, there’s nothing else to fall back on.

Some stuff, such as punctuation, can be easily fixed by using something like LanguageTool. Those tools won’t fix awkward ESL writing though, unless the paid versions are much better than the free ones I use. Ideally, you’d get a dedicated proofreader/editor or improve your language proficiency, but this will be either costly or very time-consuming. 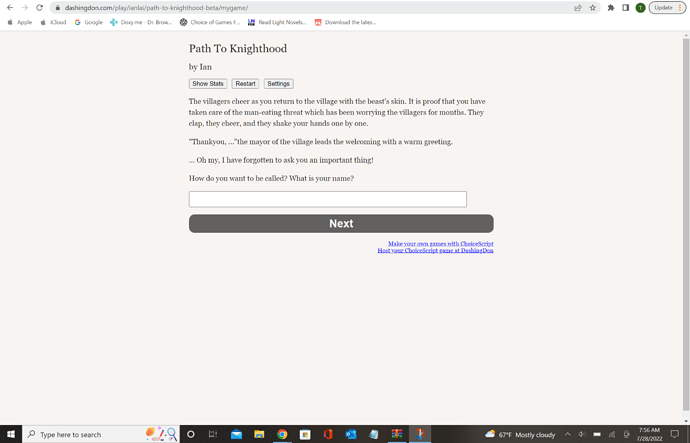 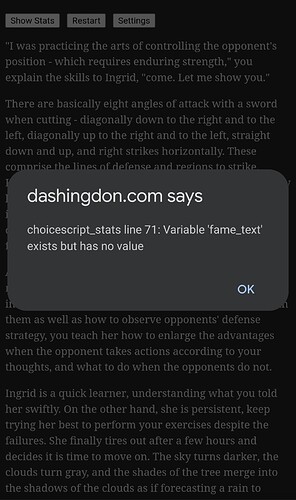 I found an error when I press the show stat screen after picking a choice. It also happen in Dobby scene.

Thanks for all the feedback, friends. They mean a lot. The bug reported by @Nexus_Knight is fixed, apologies for the inconvenience. And thanks!

I saw the R-word being used at least three times by different characters (once in the prologue and twice in chapter 7, if I remember correctly) and every time I was like (⚆_⚆)

I’d recommend removing them at least for the sake of immersion, ‘cause it definitely took me out of what I was reading. That shouldn’t be a problem since there’s a shit-ton of other words you can use to replace the R-word in those instances that would get the point across without potentially offending any of your readers lol.

I completely agree with readher about writing. I remember a part when you started the sentence with the same word three times in a row.

I wish you all the best with finishing the story, hopefully my input will be helpful to you.

Hey, so I am still playing and just wanted to remark , that a saving option would be greatly appreciated.

Hey!
the premise of the game looks really cool, i also see it more like a book than anything else.
At the beginning it says that we have the following options: “Play as a male or female, straight or homosexual.” but I realize that it hasn’t been put into practice yet. I don’t particularly feel comfortable being “forced” to be attracted to a person of the opposite sex. (screenshot)
It would be great to let us know when the option to choose the gender of romantic interests is available.
I will come back here when it becomes available!

I have just finished reading Chapter One, The Pitbull bit struck me as odd, mostly because of the setting of the story, the use of a modern animal in a fictional world. 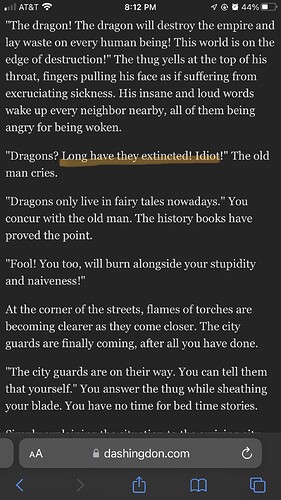 This sentence is a bit confusing, did you perhaps mean “Long have they been extinct.”?

Thanks for all the comments, especially to those who gave detailed comments on plots and writings! Based on the feedbacks, I will have a major update at 1am Pacific Time 30July, which is in around 7 hours. Since more than half of the scenes will be re-uploaded, Dashingdon will likely restart the story, from what I understand. Just want to tell you in advance so you might want to, perhaps finish it quickly or pause the reading(?) since it will reset anyway.

While the writing style and major plot adjustment will take time - a lot of it, I will certainly put them in mind and strike for the hardest. For tonight, the update includes:

Thanks for all the support!

Hi @MorgamZ , sorry for the experience. I had the homosexual romance option in mind and on the to-do list, but didn’t change the description for convenience’s sake. It will be fixed after tonight’s update. Thanks for the comment!

Hi @Simon , regarding your question: Yeah, I understand the feedback about the investigation seems odd. That’s a thing I will fix. Thanks.

Save a damsel in distress? You bet? YOU BET MY G

Need save system. Save system should br mandatory because everytime switching tab in mobile, dasingdon restart which neant back to start. Pc user might not realize how tedious that is

Enjoyed my first playthrough…BUT! Is it possible to get a save system it helps a heck ton when testing demos. Because it get tedious replaying over if our progress resets due to chrome closing etc. And having to start over.