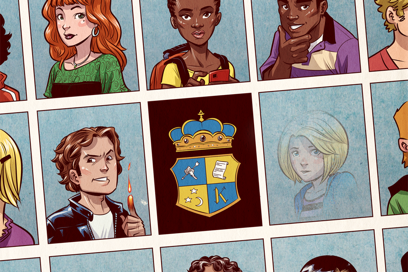 We’re proud to announce that Psy High, the latest in our popular “Choice of Games” line of multiple-choice interactive-fiction games, is now available for iOS, Android, Kindle Fire, and, via …

We’re proud to announce that Psy High, the latest in our popular “Choice of Games” line of multiple-choice interactive-fiction games, is now available for iOS, Android, Kindle Fire, and, via the Chrome Web Store, Windows, OS X, and Linux.

When the kids at your high school start developing psychic powers, you and your friends must team up to stop the principal from taking over the world!

Psy High is an interactive teen supernatural mystery novel by Rebecca Slitt, where your choices control the story. It’s entirely text-based–without graphics or sound effects–and fueled by the vast, unstoppable power of your imagination.

Play as male or female; gay, straight, or bi. Will you be a jock or a brain? Popular or ignored? Use your psychic powers to help others, or to take what you want. Win a coveted scholarship, star in the Drama Club play–or lose it all and spend your senior year in juvenile detention. How much are you willing to sacrifice to get ahead in the world?

Can you solve the case? Can you save the school? And most importantly, can you find a date to the prom?

We hope you enjoy playing Psy High. We encourage you to tell your friends about it, and recommend the game on StumbleUpon, Facebook, Twitter, and other sites. Don’t forget: our initial download rate determines our ranking on the App Store. The more times you download in the first week, the better our games will rank.

This was a fairly good game – worth the money in my opinion. I’ve only played through it once, and will probably play through it one or two more times. Like most of the Choice of games it does a good job at supporting a wide range of player characters, including darker variants.

A couple of thoughts:

Again, the game was fairly good – the criticisms above are simply areas where the game was less than ideal (in my opinion) and can be corrected fairly easily.

Glad this made it to publishing : )

Someone day I’ll be able to do one of the evil routes, but been the good guy is good for a couple of runs!

I played through the beta awesome game. I agree the money was limited… But it was not necessary to the story. Love the number of romance options tho

Is Alison a romance option? I don’t really want Carla or Taylor if I can go out with Alison, but not sure if it works that way.

She is, it triggers quite late in the game though.

I enjoyed the game by and large. It’s well written, plenty of choice, interesting storyline.

But, I was severely disappointed that it reinforces the notion that a party isn’t a party unless someone spikes the punch. I think it’s downright dangerous to perpetuate that idea, especially in a manner where there’s absolutely no consequences and the only results are portrayed in a positive light.

Now, I know it’s an odd thing to pick on in a game where there’s issues of mind-control, etc and far worse you can do, however I don’t worry that people think mind-controlling others is perfectly acceptable. But people do think adding alcohol to drinks is not just a harmless prank but it’s an expected one that only serves as a favour to those drinking.

Best game its like the movie chronicle were the highschool students develop powers and stuff!

The party is great even if you don’t spike the punch, I think it is there mostly for the ‘rebellious’ kind of MCs. I mean, you can sell drugs and make big money (with very few consequences), but I wouldn’t say it is perpetuating the idea that selling drugs is glamorous.

@Sylfaen Please send in screenshots of bugs! We’ve already issued one patch, and we’re going to do another one on Monday. It would be really helpful if you could document that for us.

I encountered a bug as well, but I can’t post screenshots since I play on my phone.

I stayed behind at the party to talk to ‘T’, but got mad and left when they were talking about ‘freaks’. At the beginning of the next chapter, I got a breakup scene (which I thought was odd, since we hadn’t actually gotten together), and then it immediately looped back into the breakup scene a second time. The game progressed normally after that point.

@OtherGrimm Thanks for that! @ladybird has already tracked that down and fixed it for the next patch.

Still waiting on you, @Sylfaen!

I forgot the series of choices that lead me to that point, sorry. I’ll mess around and see if I can trigger it again, but no promises.

The party is great even if you don’t spike the punch, I think it is there mostly for the ‘rebellious’ kind of MCs. I mean, you can sell drugs and make big money (with very few consequences), but I wouldn’t say it is perpetuating the idea that selling drugs is glamorous.

Dealing drugs may be breaking the law, but there are consequences in the game, it’s not glamourised and the chance to view it negatively.

Whereas, while you do get the choice as to whether or not spike the punch, spiking the punch is only portrayed in a positive light.

The choice text, for instance portrays the choice positively

“Wait, that’s it? This is way too tame. I’ll have to do something to liven things up. Has anyone spiked the punch yet?”

And the text (edited slightly) which is the result of your choice is again positive.

“Of course you brought a flask! It’s a party, after all, and no party is complete until there’s vodka in the punch. A few minutes later, the laughter has gotten much louder, and the dancing has gotten much more enthusiastic.”

I’m not actually against the portrayal of under-age drinking, and if it had been passing the alcohol around to minors at the party then I wouldn’t care.

I am strongly opposed to spiking drinks being portrayed in a positive light though because it’s that sort of attitude which has direct consequences. Would it be seen in the same light if it was another drug we were slipping into the punch?

I do believe that the prevalence of it in various media is responsible for people seeing it as acceptable to spike people’s drinks real life. It’s mentioned time and time again as a party isn’t a party without drinks being spiked. It’s seen as just a harmless prank, a way to make people loosen up, to liven up a party, when it isn’t.

I’ve had family members, both of whom have different medical reasons for not drinking alcohol, had their drinks spiked (on more than one occasion). That’s not a harmless prank, that’s poisoning them in a manner that could have health consequences. Yet it’s seen as acceptable, for their own good, help them loosen up. I don’t find it funny.

I don’t think there’s enough information out there that spiking people’s drinks is not only illegal, but that it’s unethical, and dangerous, whereas there’s a lot encouraging that behaviour and showing it in a positive light. I think that’s harmful.

I’m not even saying that it’s something that the choice should be disallowed. Just that there should have been some consequences shown instead of just perpetuating the myths about doctoring other people’s drinks.

Quick question: is it possible to earn both scholarships at the end of the game or not? Just wanted to see if it’s possible to be the prom crown, Kingsport scholar and athlete of the year.

I gotta wonder, how do you end up getting with Haley ?

Is it possible to date mackenzie? Tried lots of times without luck…

Be male, don’t mess up the play, and then ask her to the Prom as more than a friend.

@MystiQ
Sadly no, I wanted to really bad.