"Paranormal Preparatory School"—School's not hell, but it is on top of it!

We’re proud to announce that Paranormal Preparatory School, the latest in our popular “Choice of Games” line of multiple-choice interactive-fiction games, is now available for Steam, Android, and on iOS in the “Choice of Games” app. It’s 33% off until August 18th!

This boarding school for supernaturals isn’t hell, but it is on top of it! Can you make peace between the vampire and werewolf students, close the portal to hell, and save the world?

Paranormal Preparatory School is a 340,000-word interactive comedic dark fantasy novel by David Spain. It’s entirely text-based, without graphics or sound effects, and fueled by the vast, unstoppable power of your imagination.

You’re the only mortal human student at Cavalcade Academy, a school for supernatural beings. Zombies, werewolves, vampires, and more live and study within its ivy-clad walls. Centuries of hatred between vampires and werewolves have led to deep divides between the two species, and this school is the latest battleground. Your eldritch magic powers will be essential to earn the respect of your peers.

With the opening of the elite St. Mary’s Academy next door–a private school full of pampered, privileged mortal humans–your fellow supernatural students will face their first interaction with humanity. Your school’s reputation is at stake, to say nothing of what the wealthy upper-class St. Mary’s students will think of their paranormal neighbors!

And now, as a portal to hell opens beneath Cavalcade Academy, you’ll need to ally with vampires, werewolves, humans, a ghost, and a cyborg zombie to close it. Make the wrong decisions, and it could mean the end of you, your classmates, and perhaps even the entire world.

Oh, and don’t forget to study for your math exam!

• Play as male, female, or nonbinary; gay, straight, bi, asexual, or poly
• Choose a side in a centuries–old feud: ally with the vampire clan or werewolf pack; or try to heal the rift between them.
• Save the world from the encroaching flames of hell that rise through the portal near your school.
• Help your classmates promote undead rights–or flee back to the mortal realm.
• Infiltrate the elite neighboring school to discover the origin of your frightening visions.
• Accept a vampire’s kiss, return a werewolf’s passion, or transcend the boundaries of death to love a zombie.

It’s the end of the world. Don’t be late for class!

We hope you enjoy playing Paranormal Preparatory School. We encourage you to tell your friends about it, and recommend the game on Facebook, Twitter, Tumblr, and other sites. Don’t forget: our initial download rate determines our ranking on the App Store. The more times you download in the first week, the better our games will rank.

In your head, you’d always had a…well, you suppose you could call it a romantic vision of forests, though strictly in the poetic sense as opposed to dry-humping the nearest elm tree.

I think this is one of my favourite sentences I have ever read.

I was really looking forward to this title, but unfortunately I found it to be very boring and superficial. A lot of what happens doesn’t make any sense, everything feels forced and formulaic. I feel bad writing this, I’m sure it wasn’t easy to create this game, but I just can’t help my disappointment. I think it might be engaging for people in their early teens, but both the characters and the plot lack the depth I enjoy these interactive novels for. In a way, it has everything it needs - intriguing setting + diverse characters + choices, but somehow it does not equal a fun experience; it’s like the values were just filled in to make another CoG title that ends up lacking any deeper or unique vision.
Sometimes the humour is nice, but in a world where nothing makes sense or matters even that starts feeling forced, giving off kind of a “hey kids, ain’t this cool?” vibe.

Also, I’m not sure if it’s a bug, but I’ve been spending time with Max every chance I get and while the text makes it sound like he really enjoys our interactions, his relationship score doesn’t change. I just gave up on building relationships with anyone because I can’t get myself to care about what happens anyway - which is a shame, because character interactions and relationships are my favorite parts of these games.

Brilliant, loved it. Sonia was great as an LI and Max as a good friend.

Oh, that’s super interesting! I’ll think I’ll check it out. The cover art is definitely one of my favourites from CoG.

I had so much fun! Really liked the Empower Ending, although I would like it to be more fleshed out. In and out, a good addition to my collection.

This was very enjoyable. I’m sure harnessing the fires of hell won’t be bad for my characters health or sanity but as a man of PRINCIPLE it was the only option.

Regarding choices, I feel like too many were just “‘Yes’, but a different color”. I understand the plot has to move forward, but the author also clearly expects players to approach the game and choices in a certain way, making a lot of choices ultimately meaningless.

Overall I thought it was a good book, I was a bit confused on my first run through, although that was mostly because for whatever reason I couldn’t access the stats, probably had something to do with the fact that I bought it midway through playing it perhaps?

I do have a few questions though, just because in the description at least for me, the wording made it seem that depending on who you romance you could become a vampire, or a zombie? So when I run through the romance options, at least the one with Sonia and there wasn’t an option for that at the end, I was kind of sad. Am I missing something, or did I just read it wrong? I always like books where your human to start off with, and then at the end you come out as something else, and generally in my mind better. Anyway, that’s my two cents.

Also I did think the story was a little bit stats dependent, as in basically you’d minimax a stat and then just keep clicking on its option throughout the whole thing, but in fairness, that’s probably what most people would do in that situation anyway, and though I found a little bit mechanical, it was fine, I didn’t particularly mind. Also, the cyborg zombie was surprisingly good. I thought she would be basically your typical zombie, as opposed to basically a human come up with cybernetic enhancements who just happened to, also be essentially undead.

Also, how exactly would you save grace? I tried maxing out my combat score, but she still died.

Either way, I thought it was a good book for five dollars, and will run through it a few more times.

My only other issue is that you couldn’t have all of the RO’s, in my in my characters case, female, but that honestly could just be the fact that I’ve been spoiled with all these books where they are always conform to whatever you choose as we would like at the beginning, so maybe that’s just me. Shrug

I do that with the books that I am slowly, ever so slowly writing, but for me that’s just so I can try to make the more intimate scenes and other romance stuff as realistic and lifelike as I can, but that is just me, and I am fully aware that some authors do different stuff.

If you mean the part in the description that says “Accept a vampire’s kiss … or transcend the boundaries of death to love a zombie,” that doesn’t mean you can become either of those things, just that you can romance a vampire or a zombie.

Saving Grace requires you to have a high stat in Fisticuffs, Nerve, or Athleticism.

I’m wondering how to get the empowered ending?

You succeed if (Stop Renzfal + Empathy >90). You get some demon powers out of it. It’s not very well explored, but it’s still cool though.

Can you successfully run through the fire in the beginning?

I guess sometimes it really does pay to go off like a half-cocked dimwit.

So, don’t know if this is the right place to point this out, but on https://www.choiceofgames.com/ Paranormal Preparatory School doesn’t seem to be showing up in the games scroll (where it changes from one game to another) and when you go to Our Games Archive - Choice of Games LLC it looks like the picture is too large and has broken the formatting. Not sure if this is just an issue with my browser though. 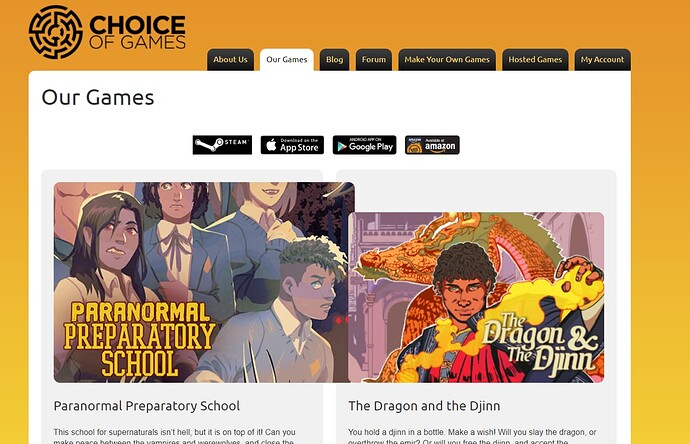 The Our Games page looks just fine on my phone, but you’re right that PPS isn’t showing up in the scroll on the home page.