But why skip personal information? And why two different variables pov_armour and show_armour?

Will it also explain why MC can’t access “Subjects and People of Interest” without their power armour on?

They can. It’s in the power gauntlet (I need a better name for it, something general

Not sure yet. Writing is pretty slow at the moment and we’ve had to edit and re-edit some things. Particularly the prologue is where we’re stuck at now but hopefully in maybe in a month and a half a demo will be ready.

When the demo is ready, @rinzygreye, please let a leader or moderators know you want to open the thread

@rinzygreye I’m sure I’ve seen this one before but I don’t think I’ve read it because I can’t seem to find a summary anywhere. What is this game about?

You’re a young hero who is navigating their powers and alongside that you’ll have to make choices that will affect your hero career.

That’s it for now but I’m still working on other ideas.
Hope you’ll like it

Cool. You should add that as a basic summary in the original post so other people can get the gist of it as well.

Hi @rinzygreye! I like your idea. I found a bug, though I don’t know if anyone else has reported it. When flying after a brief event in the alley, our character meets Cormac. But the scene is being repeated. I chose not to kill, but when we meet Cormac it is said that I lost my opportunity (which is right cause I didn’t kill the thief), but then says that I killed him by puncturing his heart. Also, when viewing other characters’
(Iris, Blair for example) information in the stats, our MC’s info comes up. I do not know if this one is a bug, but I just wanted to let you know. 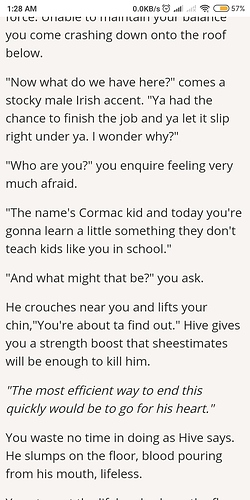 Cool! Thank you for fixing it so fast! Have a nice day

I was confused at first cause I put my name as Joel.