My cover designer and I are playing around with fonts for the Talon City cover image. We’re trying to set a fairy dark tone, and I’m not sure which direction to go.

As a reader/player, which of these layouts would be your preferred one? 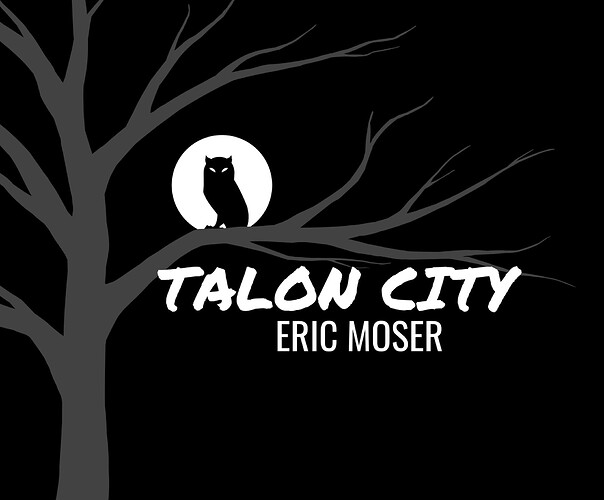 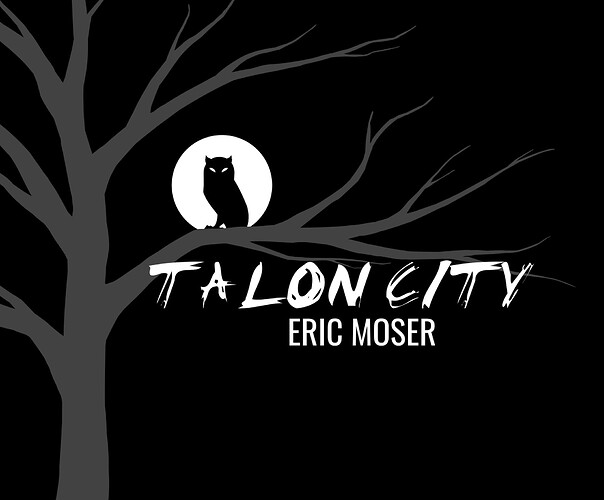 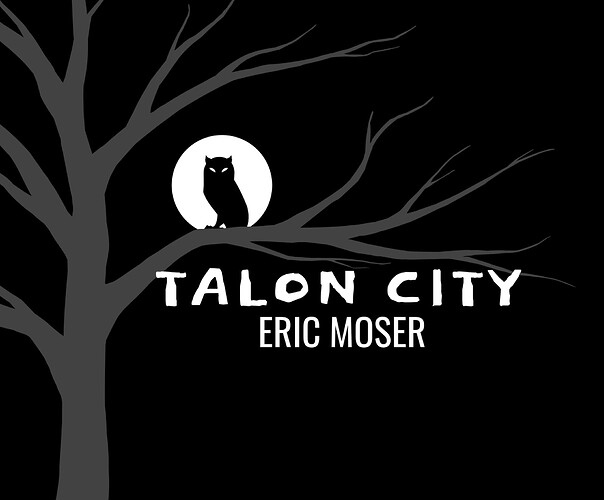 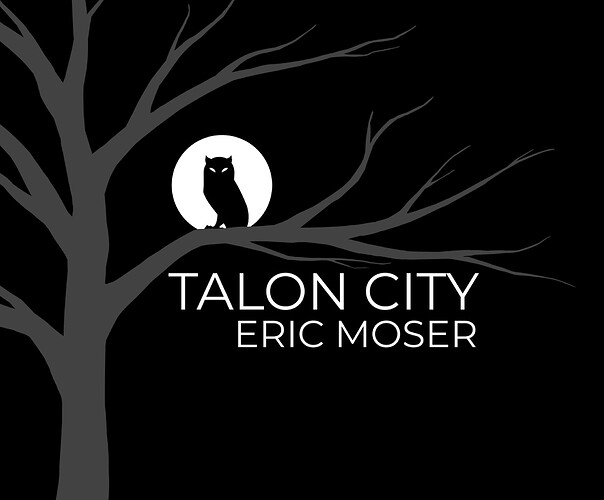 I don’t like the half-painted look of 2, and I feel 4 loses on not using different fonts for author and title.

I like 2 the best, but it also looks the least ‘professional’.
It just seems to fit, like it was written with talons.

@The_Lady_Luck I’m not sure which consideration is most important, matching the theme or overall polish. Hence, I’m asking you fine folks.

2 makes me think of a graphic novel look, maybe a bit Sin City - so I picked that one.

the author name is way too big, as big as the title. It shouldn’t be like that.

3 would work but with some building in the back since the font seem inching that way.

And here I was leaning toward #3.

So I’m glad I posted this! Thanks to everyone who’s voted thus far!

you didn’t even vote…

I vote for my name to be BIGGER.

you want something like GIANT Billboard ERIC MOSER? then a tiny ‘Talon City’?

That should make your game heavier at least…

How much is Talon City size? a few MB…add the author name and we are reaching the 1Go.

I vote for my name to be BIGGER.

You forgot '‘Child of X and Y, from House…Living in…Worked at…’

Liked the first and the second… font on the firat looks good and matched the cover.

The only thing that bothers me about #3 is the O being weirdly small in Talon, otherwise I like that font the best. #2 would be my second choice.

If you tweaked the size/font weight/kerning on either the title or author in #4 to make author and title more distinct, it’d be my favorite. The rest of the design has perfectly clean lines, so the clean sans serif feels the most cohesive and intentionally designed to me. It’s not as flavorful, but I don’t think that’s necessarily a bad thing — it lets the art draw all the focus.

#1 feels inescapably superhero-y to me. Between the comic book font, the very superhero comic book looking owl, the title being ____ City, and your name — I think a new or casual viewer is going go, “that’s a game about superheroes/Eric Moser wrote a new game about superheroes”. None of that is to say it’s a bad design, but I think it’s more likely than the others to confuse and disappoint people looking for superhero games.

#3 is my least favorite for your purposes — the font has a quirky/cutesy/hand-lettered feel that’s great for a craft beer label or a children’s picture book, but doesn’t (IMO) sell dark.

#2 definitely wins in the flavor category. Chicken Scratch is the perfect font for a game about birds. But I do agree it looks the least cohesive/professionally designed. The artwork has very clean, minimal lines and the font doesn’t, making it look a little out of place.

It’s also a free and very recognizable font. (Recognizable meaning once you learn to identify it, you can correctly identify it every time it shows up.) I personally don’t think that would ever be an issue, but high accessibility + high recognition can lead to fonts feeling overused, becoming oversaturated in a marketplace (e.g., self-published Kindle books), or taking on associations of their own, the way Impact has become the meme font and Papyrus and Comic Sans have become the “graphic design is my passion” fonts.

Again, I don’t think it’d be an issue, but I just wanted to mention it. Chicken Scratch AOE is a great font and #2 is my second-favorite cover.

I like 2 the best, but it also looks the least ‘professional’.
It just seems to fit, like it was written with talons.

Seconded. A name like Talon City just demands a slashy sort of font. 4 looks like it should be the sign for a trendy craft brewery where everything costs $13. No thanks. #3 just seems like it might have been written in crayon, and #1 is probably my runner-up. Still, definitely #2. The people have spoken.

I also prefer #2. Although I think the spacing between T, A, and L is a little strange, and the A looks a bit small compared to the other letters. That might be a quirk of the font itself.

As for the others, #3 is clean and looks distinctive, and I like the way the font is aligned in #4 (i.e. the author’s name is aligned right).

Yep I am going with the majority here for sure. It wasn’t my first pick, but my preferences don’t really matter. I think this is the sort of thing you ask folks “which do you like best?” and then you just go with it.

#2 looks pretty cool in my opinion. Gives off a vibe that just fits.