Pendragon Rising — Seize the throne in the age of King Arthur! 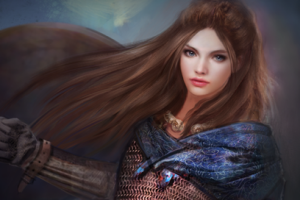 We’re proud to announce that Pendragon Rising, the latest in our popular “Choice of Games” line of multiple-choice interactive-fiction games, is now available for Steam, iOS, and Android. It’s 25% off until December 11th.

Seize the throne in the age of King Arthur! Lead an army of Britons against the darkest of enemies in this epic interactive medieval fantasy novel.

“Pendragon Rising” is a thrilling 112,000-word interactive novel by Ian Thomas, where your choices control the story. It’s entirely text-based–without graphics or sound effects–and fueled by the vast, unstoppable power of your imagination.

As the bastard offspring of the aging ruler Pendragon, you’ll fight to save Britain from a demon-tainted enemy and claim the crown you deserve. Command an army as Arthur, brave son of Uther, or Arta, fearless daughter of Utta.

Charge heroically to the front of battle, or use tricks to defeat your foes. Dally with your childhood companion, or seek romance elsewhere. Hold the line with your closest friends against foreign invaders and their sinister magics. Find friendship, forge alliances, uncover plots, and triumph over creatures of nightmare to win a future for your people and your kingdom.

Will you be mercenary or merciful? Seductive or solitary? Most importantly, can you lead your allies to drive back the darkness, and seize your place as Pendragon of Britain?

We need your support to continue delivering our games on Steam. Our goal is to release our entire catalog of interactive novels on Steam. Based on the extraordinary performance of Choice of Robots and Champion of the Gods, both which made it onto Steam’s front page this year, Valve has allowed us to ship a handful of additional games. We’ll need to continue to deliver outstanding results to prove that interactive fiction can be successful on Steam.

We’re asking all of our fans to follow us on Steam. Even if you don’t use Steam that much, it will be a big help if you sign up to follow us there, because the more followers we get, the better visibility we get on Steam’s curator list. (Our goal is to hit 3,000 followers for our Steam curation page; we’re more than 90% of the way there as I write this!)

We hope you enjoy playing Pendragon Rising. We encourage you to tell your friends about it, and recommend the game on StumbleUpon, Facebook, Twitter, and other sites. Don’t forget: our initial download rate determines our ranking on the App Store. The more times you download in the first week, the better our games will rank.

Enjoyed much. Though it’s kind of annoying that you get railroaded into getting Kernow as an ally or dying. I wanted to be able to fight the Saxons with no allies, but Gorlaes/Ygrena always comes if you get to Baddon at all.

Congratulations, look forward to playing this despite finals coming up hehe.

This was an excelent game, I ve always loved Arthurian legend. It was very well written and now I am just sad that I wont be able to play it again for the first time.

Very, very nicely written and a pleasant surprise - I have to say I didn’t expect this.

Though I must admit some disappointment at not being able to play this particular Arthur. Perhaps a sequel featuring the Holy Grail? I was actually wondering if there was a COG Group on Steam.

Overall a very enjoyable experience with a nice adaptation of the actual lore.

But… MAJOR SPOILERS ALERT!!! If you don’t wish to be spoiled, don’t read below.

3
2
1
…
I didn’t like how the story simply switches the role between men and women depending on gender of your character. I would rather play through the story as a male character who was a warrior and as a woman who was a priestess with different way of approaching things, so that each playthrough is completely different. I understand that would be a lot of more work on the author, of course, but I think it would yield a deeper and richer experience that way. I would actually be willing to pay more to get that a game like that, actually.

i would also like more closure between my Arta and Morgan. I felt like I was left hanging and needed some kind of resolution between them. Arta should at least learn the truth OR should at least suspect and question the distance Morgan put between them, even if he didn’t tell her. More than that, I want to know how they both interact with each other afterwards, and if their child ended up staying with them half a year each as my Arta wanted or not.

That’s about it for my rant. Otherwise, I enjoyed this game a lot. Needed more depth (and willing to pay more for it), but it’s not bad as is. Hope you keep making more game in this setting, since I love Avalon setting so much.

Keep up the good work!

Maybe if rewievs, just maybe there could be a sequel. I would also like some kind of a resolution of that relationship (I need to know if it will end the same way as in the legend or in some other way).

is there going to be a 2 part right? the ends are pretty much cliffhangers, but i really liked it

Ooh, that was good! Very tempted to playthrough again this time as a warrior.

Just finished this. One of the best games from Choice of Games in a long while in my opinion. I’m not familiar with Arthurian Legend but I didn’t feel this was a problem for me. I’d like to ask whether a sequel was/is planned for this game. I myself would certainly like to see it happen.

I do however think that the ending (epilogue?) felt a tad brief and the romance with Morgan lacks closure (and considering how this is one of the romance I’ve enjoyed the most in a choice of games game this is my main gripe). The alliance with other kings also feel a bit underdeveloped as I was expecting a conflict of interests and betrayal and having to compromise. The kings themselves feel interesting and varied but each one has little more than a brief scene or two.

On an unrelated note does anyone know what the other romance options are? I thought Morgan fits so well that I can’t work out who the other possible option are. Cais/Gaia perhaps?

Plus i think Emrys/Emeri is an option too but havn’t tried it yet.
And I did enjoy the romance with Morgan very much.

(I need to know if it will end the same way as in the legend or in some other way).

why not make both? i did always like " what if…"

I wanted to say that I need more of this story.

Just finished my first playthrough and I can say that I thoroughly enjoyed this game. I thought it was a great take on Arthurian legend(a fairly fresh one too) and that the gender-swapping of the world was really well done. One of the more important things is that now that I’m finished I still feel like I could go back and get quite different outcomes by playing Arthur/Arta. As a couple of others have said I would love to see a sequel to this game, especially with the way the ending leaves things fairly open.

If there is no plans for a sequel then the epilogue does feel somewhat lackluster, especially on the Arta/Morgan front. Not that I wasn’t satisfied with the conclusion of the battle, but there are just still so many questions on what will happen with the child and if Arta will learn the truth of Morgan’s relation to her.

Overall though, a really great game. Can’t wait to start replaying and see what happens if I’m not diplomacy driven Arta and instead a war monger or pious pacifist trying to avoid the crown!

Is Morgan the only fem romances in the male Arthur story line?

It great! Finish playing it twice. I can say it quite good. It entertain me so much. But there is downside. The ending when you did not become pendragon/High king end so abruptly(i think). What happen to arthur in the end of this path(gonna try this path again with “my child” next time hehe). It make wonder so much. By the way, even with this short coming. i didn’t regret. Cheers!!

the is no ending at all, is the start of Arthur legend, as for a sequel [quote=“Vladimir_M, post:8, topic:13449”]
Maybe if rewievs, just maybe there could be a sequel
[/quote]