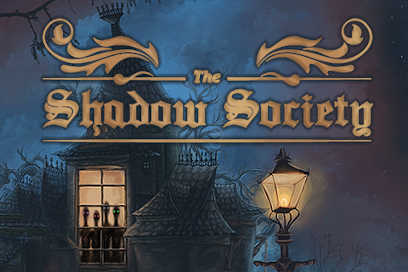 “There exists a world parallel to ours; alike in many aspects, yet different where it matters most. The only thing we know for sure is that certain people of that world have found a way to get to ours. Don’t trust them. And, whatever you do, look out for your own shadow.”
-Unknown

One night, you are faced with a dream that alters something within you, forcing you to return to your now abandoned childhood home to search for answers.

Little do you know that the abnormalities of the house are tied to another realm, and it appears your ancestors have a mysterious connection to it. But although their stories ended, yours remains to be written. Will you trust what you see, or search for a different truth? Will you put faith in those who claim to be your friends and shun the enemy, or turn the tables around? You may find your best friend, your nemesis or even fall in love during your journey. The outcome is up to you.

The Shadow Society is a 675,000-word interactive modern fantasy novel by Cara Palmer, where your choices control the story. It’s entirely text-based—without graphics or sound effects—and fuelled by the vast, unstoppable power of your imagination.

Cara developed this game using ChoiceScript, a simple programming language for writing multiple-choice interactive novels like these. Writing games with ChoiceScript is easy and fun, even for authors with no programming experience. Write your own game and Hosted Games will publish it for you, giving you a share of the revenue your game produces.

Congrats
Thanks for the hard work you put into making TSS

I had literally no idea this was coming out already?? I just got home from work and got the notification… and just shouted “Oh shit, The Shadow Society’s out? Yes, fuckin one-tap buy, thank you!”

I’m sure my sis thinks I’m a massive nerd, but what else is new

oh and huge congrats to @Carawen of course!

Congrats for The Shadow Society Release!

I have actually been waiting for this. Gonna get it ASAP.

WoW… I really like this one, congrats on the release… It’s nice…Waiting for it for a long time , lol got it already…

Here I am hoping next time we can romance the Shadowman

Congratulations my freind I wish I could write. Lol I’m happy for you keep up the good work

I don’t know why no one noticed it at the beta…but, when you choose the group with whom you went in a car like thing. There if you don’t go with the person whom you ro/friend/rival with… somehow they(and the group) always are the one that comes to save you from the shadow man after you run away from the car.
If you are not in the same car, they should not be even aware of your escape.
@Carawen

I don’t know if you can answer the question @Carawen but… at the end of the game we can kill Q or Michael… Are they really dead dead?
I can’t still believe it. I loved the game anyway, good job. I can’t wait for the sequel

@demontears You can initiate a romance - flirting, choosing if the MC feels something towards the Shadowman etc. Him and Jealene (the other secret RO) will have lots more content as characters and love interests in book 1 and 2, but in book 1 it’s only the very start of it!

@Kalpana That’s a good point, but actually not a mistake; I definitely could’ve explained it somewhere, and it might be a good idea for me to add that the MC can question why the character in question knew where they were. What I had in mind for this path was that the full group meets up as the MC is running, and the one they are closest to take off after them after learning of their escape

Thanks everyone for the comments so far!

@Tpryor I don’t know if the game works on Kindle? I could be totally wrong though and I’m not sure why there’d be a problem in that case. Do you get an error when you download it?

Congrats on the release! Im sooooo excited to play this a thousand times. <3

@MaryQueen I’m so sorry I completely missed your message

Yes, if you kill Q or M they are permanentaly dead. For an MC who romances one of them, that can affect them quite a lot in the second book, if you choose to play an MC that feels bad for it. Though the killing of M is quite a bit more sadistic than the killing of Q

Thank you so much, I’m happy you liked it

@Rindax Thank you so much aaah <3

@Carawen I’m over the moon hearing this, thank you very much for allowing us to romance him. That fool owns my heart.

Why would anyonekill Q or M?

Q and R are the most interesting ones but all characters are well planned and written.

Holy shit, Cara, that was awesome! I played through A’s route and loved it. I accidentally asked V if he was single and pissed A off in a huge way. Yeesh, no sense of humor at all. The whole piano scene, though???

I just love A’s reaction to an MC who is fighting that attraction for everything she’s worth. XD

When I was done, I did a speed run of Rheylo (you know how much I love him!). I had my doubts because of the whole “slow burn” thing and him being… well, him. But it wasn’t as annoying as I’d feared. A shy MC, or one in complete resistance or denial, works way better with him, though–a forward one just doesn’t work with him, IMO.

The story is freaking awesome, and I love the twist at the end (my MC did not, and is beyond pissed off because she wants to be back in Shadowworld instead of shitty Sunworld). I did suspect what was going on with M, though. Q was a complete and utter surprise.

I love G, despite having no desire whatsoever to romance him (I’m not even sure i could make a character to fit with him). M… not so much, for a multitude of reasons. But the dad? I am so doing a run through romancing him.

Great job! I can’t wait for the next book.

why does it say 550,000 words on Steam? is one including code and the other not or is there something else?

Congrats for the release, played it more than once already. Can’t wait for the sequel.