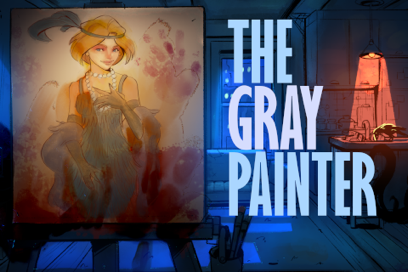 In this unsettling, mature story with a set main character, help average office worker Ash gain the confidence to make new friends in an exclusive nude painting group. The Gray Painter is a 145,000-word, 20-chapter interactive novel. It’s entirely text-based, fueled by the vast, unstoppable power of your imagination. It's 25% off until July 14th!

You can select Ash’s sex, gender, and orientation. Ash begins the game in a relationship with Harper, a gender-selectable partner. The option to break up with Harper becomes available in Chapter 9.

Praise for the Gray Painter:

The Gray Painter depicts drug and alcohol use, smoking, inferred suicide, explicit sexual content, horror, and high-impact violence and gore. The story also features themes of body insecurity and dysmorphia. This is a story for adults aged 18 and up.

William developed this game using ChoiceScript, a simple programming language for writing multiple-choice interactive novels like these. Writing games with ChoiceScript is easy and fun, even for authors with no programming experience. Write your own game and Hosted Games will publish it for you, giving you a share of the revenue your game produces.

What impeccable timing, I was just looking at WIP thread and was disappointed that the demo was not there anymore.

Awesome Gray Painter and Sword of Rhivenia on the same day!

Congratulations on the release

Where is the announcement post for Sword of Rhivenia?

Will it be available on Steam?

I still can’t figure out how to increase confidence! Any help…?

Today’s new games have been announced to the mailing list, meaning they’ve been successfully added to every platform they’re going to be on. If it hasn’t been released on Steam yet (and it hasn’t), you can safely conclude it won’t be.

I was hoping for a Steam release too because I really like Loman’s work, but I wasn’t expecting one, because there wasn’t a Steam icon next to this game’s listing on the Upcoming Releases post.

Games that aren’t initially released on Stream sometimes get added there if they do really well on other platforms. But it’s not something you can ever count on.

In the Playstore for me. I am using Android. Finished chapter 1 from 11 haha. Long and awesome game.

It’s available on Steam and in the omnibus app. I bought it and had it transferred a few hours ago.

It’s slow at the beginning. However, there is a mild New Game Plus mode if you pay attention to some new options that pop up in a second playthrough.

Also, take note of options that can be selected even without the confidence required.

I don’t have any information about its status on Steam. News to me that it doesn’t have a Steam release; it was never discussed with me.

I was answering the person who asked about The Sword of Rhivenia. Yours isn’t on Steam, unfortunately. I had to buy it directly in the HG omnibus.

I’m happy to see this released @will – I love the above thumbnail cover art, and the setting of this narrative.

Let’s try to keep discussion of the Sword of Rhivenia out of this thread to avoid confusion.

I rememeber playing the Beta for this on Dashinton. I remember it catching my attention cause of how different it was.

I didnt know its release was scheduled though? I mean, its hella cool that it was! But, i dont rememeber it even being announed that it was submitted.

Fair enough. Sorry about that.

It’s always been a small game, ha ha, has kind of flown under the radar and will definitely be eclipsed. I don’t mind too much but my biggest fear right now is that people will see the first choice where confidence is too low and never take the chance to see where the story really goes.

I. Am. Obsessed. Been through the game three times already, only missing one ending! So close

driving myself crazy trying to find it. On the whole this is one of the best things to come out of CoG in recent memory imo