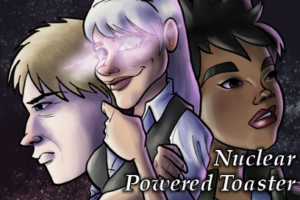 It’s always a bit stressful on graduation day. The uncertainty of the future, the excitement of endless possibilities, and of course getting blown out of the sky by a weapon that should no longer exist. Welcome to Earth in the 24th century. It’s 33% off until November 1st!

Nuclear Powered Toaster is a 160,000 word interactive sci-fi novel by Matt Simpson, where your choices control the story. It’s entirely text-based—without graphics or sound effects—and fueled by the vast, unstoppable power of your imagination.

Humanity is a pale shadow of its former glory after two nuclear wars and living under the constant threat of orbital attack. You…won’t really be able to change any of that, but if you play your cards right, you might just live to see another sunrise, and possibly even unravel a sinister plan!

• Play as smuggler Alexi Beaumont, or superpowered government agent Fiorella Branford for two distinct experiences.
• Meet new and interesting people on Duck Mountain, and try not to be incinerated by them!
• Team up with a henchman, an actor, or the solar system’s oddest janitor.
• Uncover a global conspiracy and bring down a mysterious terrorist…if you can.
• Resolve situations with wits, force, or just harness the erratic power of pure insanity.
• Endeavor to keep on good terms with your comrades, or risk turning an ally into an enemy!

Comedy, action, and a pinch of absurdity await those who board the Nuclear Powered Toaster!

Matt Simpson developed this game using ChoiceScript, a simple programming language for writing multiple-choice interactive novels like these. Writing games with ChoiceScript is easy and fun, even for authors with no programming experience. Write your own game and Hosted Games will publish it for you, giving you a share of the revenue your game produces.

It’s time to buy a few truckloads of bread, and a giant vat of butter.
Why, you may ask?
Because we now have access to a Nuclear Powered Toaster!

Thanks so much, y’all! No matter what happens, it’s been great getting to know the people in this community over the last year and a half. This would have been absolutely impossible without the troubleshooting and support of the other authors, the users, and Rachel and the other CoG/HG personnel. Everyone has made this a blessed experience, and I am really grateful.

Published author! Never thought I’d live to see the day. Especially after the last couple of weeks. But it feels good, and even if it’s a title based more on willpower than actual talent on my part, well, that’s better than having neither one.

Mysterious. Wonder what it said?

It’s not a rush, but does my name have the Hosted Games author title on it and Injust don’t see it? I got the badge for being one but I don’t know if the title is a separate thing.

Added it. I’ll also add a task to my new tracking system. (It’s noteworthy for any published author, that you should have access to the #published-authors category in addition the the hosted game/choice of games badge.)

Was not aware that author category was a thing, very neat.

Is the title added? I still don’t see it.

I stuck it on for you, but generally so long as someone had the badge they can do it themselves.

Okay my question: (aside from @Nat_Sattabongkod’s question that would be my second question)
So there are two preset characters (a male and a female one) you can play as?

Edit: I’d say that doesn’t sounds too satisfying for me. I like to make up my own charactercters for the games I play (read) or do self insert if the game is really special. Preset characters don’t leave much space for this imo.

Yeah there are two pre-set protagonist, one male and one female to play at…

as for RO, it is not obvious yet… i mean no romantic interaction … @hustlertwo said if there is a sequel, he will allow the NPC we find here as RO, for female RO, i think there should be 3… including the villainess

The preset protagonist thing is an off for me. Still I wish good luck for the author. And thanks for the answer Eric.

if there is a sequel

Is it complete or is it part 1?

the story writing is quite good, you might want to give a try

Is it complete or is it part 1?

this story is complete, for my opinion … but it leave room for a sequel we save the day, but a certain alluring villainess may or may not get away … for my playthrough i let her escape, and she contact me …trying to make me a turn coat but otherwise it is still a good ending …

That was the open beta test though , i am not sure whether there is any more changes … i bought it and re-play it now

Okay I am calm now so i can give my opinion without being rude. It was the worst experience I have with a hosted ever in a demo. .
It is childish, it forces absolutely everything name hair color haircut name taste if you are a girl strting directly calling you fat and describe you in a sexist fashion humor is sme level a kid saying poo. However is not bad written. it is this have no interactive focus and i don’t see the fun to kids fart jokes

describe you in a sexist fashion humor

@poison_mara I had a quick look at the demo this afternoon and couldn’t find anything sexist in what I saw at least. Maybe something has been lost in the translation? All it said was you weren’t skinny because the talent you have means you chew through calories quickly and it would be unhealthy to be on the light side when starting a mission as you would end up underweight easily. (Male or female.)

The humour does tend towards the crass side, but everyone’s tastes are different which makes humour with a wide appeal much harder to write. (I can say that having being part of a game that used parody type humour.)

I’m actually going to fall on the opposite side of what the reviews in the app store are currently saying. I actually appreciate set characters at times and can see why you’ve done it. It allows for a more character driven storyline as you know exactly who the preset characters start out with and can build story options around it (for example the mediocre psychic abilities and previous training hx) rather than having an open blank slate character sheet which makes that far harder to do. (Place for both IMO

Could it be translation but how i was treated in some girl camp scenes is sexist to me I hate poo and fart jokes I always do and the protagonist is so defined that i don’t see the point to play something I have no say except choose how. I don’t care how if Why and Who I am is preset Hell i can’t choose the name or age or hair style or xharacter orientation

Fair enough, doesn’t sound like this game is for you

Firstly, on the subject of sequels, I will repost my thoughts from the WIP thread.

Do you have your IP house in order??? Does the fam know what to do with NPT when you attacked by a troop of baboons next week?

Heh, what is to be done with it remains to be seen. NPT is certainly designed to be part of a series. An indefinite one, potentially. At this point there’s three options.

To add to that, the advantage of having lived with a story for thirteen years is that ideas for continuation are not a problem. The Salian arc would be three (cliche, I know, but it’s hard to avoid the simplicity of the number). The Hoard would take things to a gigantic hidden storehouse of pre-Clysm technology that also serves as a colony for the workers and squatters therein, and deal with a struggle for power by different factions using figureheads. You would be able to spend a lot more time choosing your side, instead of just at the end. The third one would finally take you to space for a large-scale conflict.

After that I define the arcs by their antagonists, and have at least two more big bads sketched out already (though each of those might be as short as a single story). Possibly three if I decide to allow for time travel.

As for the negative reviews, some are valid and some are not. I will echo what literally dozens of authors here have said in some variation or another over the years: the main thing eliciting the negative reviews is something stated upfront in the description, so it begs the question why people download it anyhow and get mad when they could just avoid it entirely. There is no secret about having preset protagonists. And I anticipated some blowback for it even though it means the people buying this story ironically seem to have trouble reading, given that their premade identities are revealed in the front page description. The Parenting Simulator has a custom MC for this very reason (well, and because it made more sense in that context since you won’t interact with MCs as NPCs in other playthroughs like here)

Now, people who don’t like my sense of humor (or lack thereof), who find the world empty and the characters flat, those are valid opinions and while I hope they’re not they are not the majority, it at least gives me food for thought going forward.