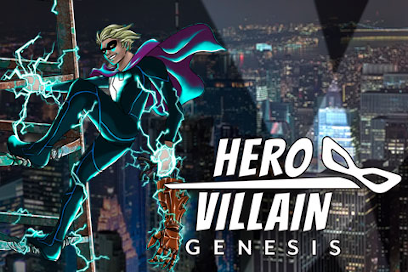 Become the greatest hero or villain that the world has ever known! Balance the challenges of leading a normal life, while attempting to defeat evil…or wreak havoc on the world. It’s 25% off until September 26th!

Hero or Villain: Genesis is a 330,000 word interactive novel by Adrao, where your choices control the story. The game is text-based, with artwork to help set the scene. Will you hunt down villains to the last corner of the planet, join a group of fellow heroes (or villains!), defeat New York’s criminal mastermind, or even replace him?

• Choose from dozens of powers. You can pounce on your enemies with the power of your fists, strike them down with hellfire, take control of their minds, dodge their attacks with your super-speed, or rewind time to learn from your mistakes.
• Build your own gadgets, improving the quality of your armor or the weapons mounted on it.
• Make alliances with other heroes, and attempt to find a sidekick that works with you.
• Play as male, female, or non-binary, and romance many of the other characters!
• Several illustrations to enhance your experience.
• Many different game paths, with over two dozen different endings.
• Several difficulty settings. Play as a mighty invincible hero, or just somebody only slightly more powerful than an average human.

Adrao developed this game using ChoiceScript, a simple programming language for writing multiple-choice interactive novels like these. Writing games with ChoiceScript is easy and fun, even for authors with no programming experience. Write your own game and Hosted Games will publish it for you, giving you a share of the revenue your game produces.

Also: Tokyo Wizard is now on Steam and is also 25% off on all platforms! Congrats @adrao! 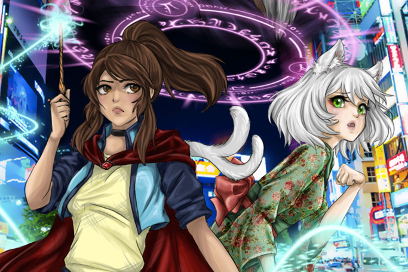 In honor of the release of Adrao’s latest game, Hero or Villain: Genesis, his other game Tokyo Wizard is also on sale and for the first time, is available on Steam! Updated, and with an exp…

Really liked that we had the choice to pick our power. It gave the reader a better illusion that his choices matter.

Seems promising ill try it out

Finally! So good to see the real thing come to life

I’m enjoying this so far, @adrao. Congrats on the release. One thing I noticed is that in this particular scene, I’m referred to as a superhero instead of a supervillain. Not sure if this was a small bug or not but I thought I’d let you know.

Seems the name was changed during December

Just started it looking really great so far. Love the ability to choose and customise your powers

If anyone likes superhero games which are very customisable with lots of different paths and endings I recommend you check this one out. I’ve read it a few times and kept finding new content.
(And Tokyo Wizard is one of my favourite hosted games

I played the game three times and my endings are always being sent to prison by that Moon Shadow guy, is there any way I can avoid that ending as a criminal?

I’m confused can anyone help? When I start picking my powers j usually pick 3 or 4 but in the stats screen only 2 how up, what’s going on? Are the others one still counted?

@AlexHaydenX there are ways to avoid him, for example you can help the Steel Aeronaut to steal money, and then go and try to find and join her…

@Brayden_Viloria this feels like a bug, can you please send some screenshots?

@Mary_Duffy thanks Mary and everybody else for the kind words!

@Samuel_H_Young thanks for pointing out this bug, hopefully it’ll be cleared in the next update!

So I picked superspeed, electric powers, and incredible aim.

I think the movement powers don’t register, on this run I picked electricity and superhuman agility just to see and the superspeed didn’t show up.

Hi! I wasn’t sure where to put this but I noticed a tiny issue in steam- when it finished installing, still on my downloads page, the picture is for Samurai of Hyuga, book 4 (which I don’t own), though the rest of it seems fine.

Finished some endings so far. I have to give this a solid 3.5 stars. While I’m bummed you can’t team up with Shiroi Yuki, I hope that can be remedied at a later date.

First off, the power customization is great. IMO the best thing about any magical sort of game is having varying types of magic. Luckily, there’s a lot here. Adds for some good replayability.

Bugs. There’s quite a lot of them. I can try and take pics of them.

RO’s feel weak. You never really feel attached to any of them, sorta. The only characters I really enjoyed were the shark and roach guy. The best one was Shiroi Yuki, since she’s so similar to Yuki from Katana ZERO. With the weapon dealers, you sorta just repeat the same date over and over again with no real variation. Nothing, it’s the same dance club date repeating forever. Didn’t even bother touching anyone else.

Artwork was a nice touch. I like seeing what the world around my character would somewhat look like.

I would like to see a checkpoint feature in place one day. Time rewind powers dont count! Since there are so many endings, having to restart the game to see how they all play out is really tedious.

Overall though, this was an enjoyable experience. Good work, Adrao.

Two questions. How exactly do we team up with the SA? All options lead to a fight…

Also, how do u increase the evil stat? For the life of me I cannot figure it out.
Seems like many of the “evil”-sounding options increase the vigilant stat instead, including the “evil” option at the very start of the book “I didn’t care at all about the kids. I went inside to see if there was anything I could steal, but this somehow helped the kids escape.” which sounds kinda mean but increases the vigilant stat by 15 instead of the evil stat.