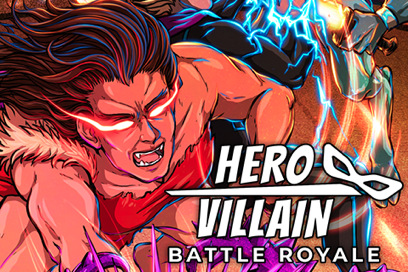 Battle other heroes and villains in a gladiatorial contest to become the galaxy’s champion. Hero or Villain: Battle Royale is the second book of this epic saga, picking up from the epilogue of Hero or Villain: Genesis.

Kidnapped from planet Earth by the mysterious Lanista and forced to fight in the Battle of Champions, you will have to balance your training with fighting injustice in an alien world…or becoming a criminal yourself!

Will you follow the tournament to its conclusion, and claim victory over colleagues and foes? Or will you start your own criminal empire, and accomplish the biggest heist in the history of the planet? Are you a loyal subject, or will you join the ranks of the rebels attempting to overthrow the rule of the Elders over the galaxy?

• Import your character from Book 1, Hero or Villain: Genesis , or create a new one.
• Choose from dozens of powers. You can pounce on your enemies with the power of your fists, strike them down with hellfire, take control of their minds, dodge their attacks with your super-speed, or teleport behind their backs to strike them.
• Build your own gadgets, improving the quality of your armor or the weapons mounted on it.
• You can also learn new alien technology and design even more complex projects that will decide your fate in battles.
• Manage your relationships with your colleagues to help them succeed, or strike them down.
• Play as male, female, or nonbinary, and romance many of the other characters!
• Includes several illustrations to enhance your experience.
• Enjoy a variety of different game paths, with multiple side missions and endings.
• Try several different difficulty settings. Play as a mighty invincible hero, or just somebody only slightly more powerful than an average human.

Adrao developed this game using ChoiceScript, a simple programming language for writing multiple-choice interactive novels like these. Writing games with ChoiceScript is easy and fun, even for authors with no programming experience. Write your own game and Hosted Games will publish it for you, giving you a share of the revenue your game produces.

I know you worked very hard to make the breadth of this game as wide as you did, and I believe it will become one of your fans’ most desired.

It is amazing you are immediately involved in another project and doing another very wide styled game.

The options in Battle Royale are amazing.

Look forward to playing this over the weekend.

An issue with this particular title, or a systemic issue with iOS as a whole?

It’s an issue with this title.

Yes! Can’t wait till I get home and can finally play. Gonna build my own criminal empire

I had a lot of fun testing this thanks to the intriguing main storyline with the Elders and the Lanista, and the way the MC’s colleagues interacted with one another. The setting really felt like a living, alien world.

As soon as the email has arrived, announcing that the game had already come out, I was already buying it

There’s a bug in the iOS app blocking purchases. In the meantime, buy it on our website https://www.choiceofgames.com/user-contributed/hero-or-villain-battle-royale/ and then you can restore purchases in the app.

I feel the need to point out that the first preview image on the Google Play store retains the typographical error ‘Villian’, even though that’s apparently fixed here.

Unfortunately Genesis is broken I cannot create my hero.

Alright this might sound stupid lol but how do I buy it on the website every time I try to it brings me to the app and the same error pops up???

While I really like this game, I think an option should be provided where we would be able to save our progress…I just spent close to an hour, fighting and winning all fights only to lose all my progress at once…it really is unfair

I (just) fixed an error where some iPhones and iPads would be forced into the app when clicking the “Buy” button instead of buying on the website.

If you have this issue, try refreshing the page and buying again, or, in the worst case, buy the game on a computer instead of your phone. (For some reason I found that the bug was very sticky, so I had to force Safari to close before it worked properly on my phone.)

I know how much work went into this one

Congrats!
All the hard work is finally published

How are you feeling right now?