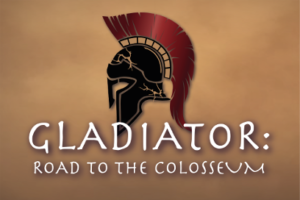 The Romans call you many names. A slave. A gladiator. A champion. Who and what will you be? You decide. Conquer the arena, navigate petty Roman politics and etch your name in the annals of Rome! Or die trying. It’s 25% off until January 24th!

Gladiator: Road to the Colosseum is a 220,000 word interactive novel by Foong Yi Zhuan, where your choices control the story. It’s entirely text-based—without graphics or sound effects—and fueled by the vast, unstoppable power of your imagination.

• Play as male or female; gay or straight.
• Battles against slaves, gladiators and even wild animals!
• Manage relationships with your friends and enemies, rig a vote or poison a foe!
• Navigate the complicated (and petty) politics of the Roman Senators.
• Unique character tracking system and story that makes each playthrough different!
• Find love amidst the madness of the arena, even in the most desperate of places!
• Fight your way to the Colosseum, through the greatest games the world has ever seen!

Fight for your freedom and etch your name in the annals of Rome!

Foong Yi Zhuan developed this game using ChoiceScript, a simple programming language for writing multiple-choice interactive novels like these. Writing games with ChoiceScript is easy and fun, even for authors with no programming experience. Write your own game and Hosted Games will publish it for you, giving you a share of the revenue your game produces.

I really wanted to download/buy this for my tablet, but when I searched for it in the Amazon App Store, it wasn’t there.

Awesome!!! Huge shout-out to the Hosted Games team for making this happen!!! And thank you for publishing the game!!

YAY!! Thank you so much!

Congrats on being #7 trending in roleplaying games on Google Play! Can’t wait to try it out

Well, played the game, and it was quite a treat. It does a great job at setting the rather dark situation the MC is in, and the action scenes are great all around, probably among the best CoG has to offer. It’s only too bad that most of the characters you interact with aren’t that well-defined nor is your relations with them that relevant - in fact I don’t think any treats you differently depending on how they like or dislike you? Perhaps the childhood friend, I’ll have to test that.

I also raised an eyebrow at the few times the terms of Hell or Heaven are used (at a period where those concepts wouldn’t really be a thing for most), but that’s just nitpicking.

@Hamartia_MacGuffin
Thank you so much for your support!!!

@Talyrion
Thank you for the great feedback! I’ll have to admit that I’ve a lot more to learn - especially wrt the relationships and the interactions. It’s been a wild ride so far, and I’m finding myself watching/reading a lot more about game design/writing to try to improve this aspect!!!

Ahh. It must be my colloquialism slipping through. Perhaps a better word might be underworld?

Ahh. It must be my colloquialism slipping through. Perhaps a better word might be underworld?

I admit I’m a bit rusty on my Roman mythology. Instinctively, I’d say Tartaros would work well as a Hell substitute, and Elyseum as a Heaven substitute, but while I’m certain those are the common Greek denomination, I can’t remember if Romans gave it another name. Alernatively, Hades/Pluto can also design the place instead of the god (but there’s no real positive or negative connotation to it, it’s the place where everyone go, after all.

Impressive, love the fact you get to pick your country of origin so I can be a bad ass Egyptian or Gaul.

I wish this - and other HGs too, for that matter - could be published on Steam. I’d buy it straight up.

I do have a phone (guys), but I rather sit in my comfy chair with my PC - without having to be on this here website. Is this possible, please?

@Talyrion
Hmm to be very honest, neither am I hahaha I’ll definitely have to look it up again for the next book and maybe stick to the correct terms! It’s always a challenge to discern modern perspectives from those from the past, which is definitely something I got to improve on!!!

@derekmetaltron
Thank you so much for playing! Sounds like your MC was crushing it in the arena!

@Taylor_Enean
It’s definitely a pity that it’s not released on Steam - @idonotlikeusernames has also echoed this sentiment countless times. But I’m sure HG has their reasons as well, hopefully this changes sooner rather than later!!

Ok so what happens to your best friend once they get taken from you?? I thought the in the final fight the other gladiator was going to be revealed as the best friend so I chose to spare them but that was it. It’s not a huge thing but my curiosity has gotten the better of me and I need to know lol

Ok so what happens to your best friend once they get taken from you?? I thought the in the final fight the other gladiator was going to be revealed as the best friend so I chose to spare them but that was it. It’s not a huge thing but my curiosity has gotten the better of me and I need to know lol

The gladiator actually IS revealed as your best friend. Problem is, it’s done in a “blink and you’ll miss it” way with a throwaway line, and then the game ends.

Can you romance aurelia? Or Horatia?