New Hosted Game! "Death at the Rectory" by Felicity Banks 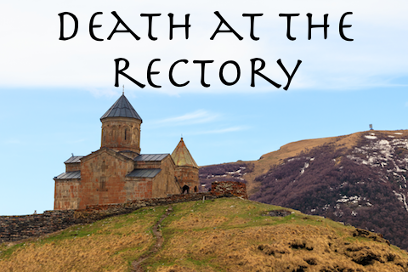 You’re enjoying a writing retreat held in an Australian small town, when one of your fellow writers is killed, and all the rest are suspects—including you. The ancient rectory grants you curious supernatural powers, and it’s not clear if the magic is benign or malevolent. Can you figure out who the killer is before they take another victim? Is the rectory the real killer? Or is this the ultimate chance to find out for yourself what it feels like to murder another person—and get away with it?

Death at the Rectory is an 87,000 word interactive magical murder mystery by Felicity Banks, where your choices control the story. It’s entirely text-based—without graphics or sound effects—and fuelled by the vast, unstoppable power of your imagination.

Are you attracted to the vivacious Muslim woman or the charming American man? Do you dare to fall in love when the object of your affection might be a murderer? Will your word count survive the stress of being a murder suspect? Will you ever get a turn in the shower?

Felicity Banks developed this game using ChoiceScript, a simple programming language for writing multiple-choice interactive novels like these. Writing games with ChoiceScript is easy and fun, even for authors with no programming experience. Write your own game and Hosted Games will publish it for you, giving you a share of the revenue your game produces.
31 Likes
trevers17 September 30, 2019, 5:26pm #2

This was a fun little bit-sized game. The first time I played through, it wasn’t immediately obvious who the killer was, so I applaud the author’s deception skills. Will definitely have to play through to try being the killer (if I can figure out how to actually open that route, lol).

I’m curious to know how the killer is determined, as I got the same person both times. A bizarre stroke of luck, perhaps? Or is it because I picked the same person to trust the most?

Congrats on the release Felicity!

Really enjoyed the demo, though I must ask, is it coming to Steam, or any chance it will? Just trying to keep them all in one spot.

The killer is determined randomly at the very beginning, so you need to stay on your guard from the start

Only in the sense that they’re both “cozy” murder mysteries - which I define as, “Other than the murder, nothing bad happens and it’s fundamentally a comforting read.”

Really enjoyed the demo, though I must ask, is it coming to Steam, or any chance it will? Just trying to keep them all in one spot.

I don’t think so. I think it’s a little too different to the usual HG style (not that I know anything about how these things work, just… don’t hold your breath).

Congrats on another release @Felicity_Banks! Looking forward to checking it out

But different can be very good, as in this case.

Thanks for the answer, just hope they can get them all there, this one included.

Very focused in its scope and as a result very rich in its execution.

How can you become the Killer??

Hi there! It’s not a meme or joke. Have a read of these understanding gender or understanding non-binary people resource pages if you’re interested in learning more.

How to become a killer…

Whenever there’s an ominous choice, eg thinking about murder, take it. That shows the game what kind of person you are.

It helps a lot if you find the knife. The location changes depending on the killer. (PM me if you want to know exactly where—you can find it, and choose to hide it if you’re stealthy enough, in the scene where everyone is in pairs searching for clues around the house.)

Then you need to get into a fight with the killer while still near your car. Or you need to be quite fit (so take every opportunity to exercise).

Hi, I followed your works and enjoyed the story! It is short but thankfully it presents more replayability. There’s this one achievement I can’t get though. How does the player get away with murdering the murderer? I always get caught, whether I killed them after or before getting in the car.
Also there might be a slight bug in the android version (don’t know if this is on the writer’s end) but even after I had the knife, I suddenly lost the fight everytime. This doesn’t happen in the web version.

Cozy mystery you say? I used to love the old Hercule Poirot books and I am very down for this.

To successfully murder someone, you need low empathy.

That comment about the android version is so weird, and well above my pay grade

I shall attempt to investigate it, but no guarantees…

Anyone else tried to get away with murder on Android??

So I know this is probably a weird ask, but is it possible to avoid the [ANIMAL CRUELTY SPOILER] without choosing specifically at the beginning to avoid the scene?

I’m asking because I’m playing on Android and it seems like two of the choices of writing genre (which I’m guessing is what sets your type of magic) results in the same type of powers. Is this a bit of a coding ‘oopsy’, or was this deliberate?

I’m wondering if this is what makes the difference, since in previous CoG and HG games I’ve played where there are variables misset somewhere (Congresswolf comes to mind), tends to result in things being accidentally locked/dummied out.

Thank you so much for such a great game!

So far I’ve played the game through twice, and played the beginning bits twice more. I’ve managed to make the connection between genre and powers, but I’m not certain whether there are other factors affecting powers, since Renee gets them too. I’m also not sure how many different possible murderers there are, since I got the same murderer and the same motive both times.

I have many questions left, but I will investigate further and see what more I can learn.

Oh crud. Yes, your genre alters your powers. But I cut down the variety of genres at one point, and that also cut the potential ability to see the future. So yes, it’s an oopsy.

@Hazel, there are two possible murderers. It’s randomised, so sometimes you’ll get the same one twice in a row.