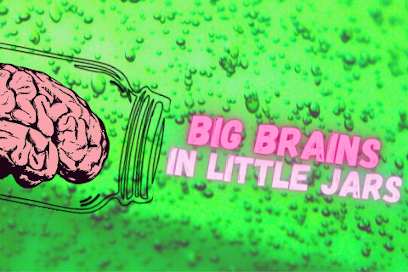 Become a brain-for-hire in this mad-science adventure!

Big Brains in Little Jars is a 300,000-word interactive novel by Ashlee Sierra. It’s entirely text-based—without graphics or sound effects—and fueled by the vast, unstoppable power of your imagination.

As a valued appendage at a company called Gray Matter, you’ll do the thinking, speaking, and fist-fighting for clients who hire you, all from the comfort of your jar. Along the way, you’ll start riots, solve riddles, torment party clowns, escape burning buildings, find allies among your fellow brains, and commit felonies. Not a bad gig, as long as eternal servitude is your jam.

Of course, every workplace has its downsides. Bad brains get imprisoned in dead bodies, your coworkers are tired of being science experiments, and that intern won’t quit looking at you funny. Also, the healthcare coverage is abysmal. But escaping won’t be easy. After all, you’re a brain in a jar—and Gray Matter isn’t about to let a valued appendage just roll out the door.

Wow, this sounds…kind of awesome?

Honestly the non-Steam releases rarely grab my attention, but this one has. First few pages are very well written imo; I love the overall vibe. I’ll read some during lunch - this one mgiht warrant a buy.

Congrats on the release, Ashlee Sierra!

Mega congratulations on the release! I am super proud to have been able to contribute to the open beta for this incredible - and unique - game.

Oohh this looks really interesting.
Can’t wait for work to be over so I can check it out.

Reading the title: “You have my curiosity”

Reading the blurbs: “Now you have my attention.”

Update: I bought it. I am a sucker for stuff that really busts the typical choice-based meta wide open.

Is there any chance of an option to mark the “sarcastic” options? I’ve barely started and already managed to select two of them without having any idea that they were meant sarcastically. It’s so difficult to tell over text to begin with, and I’m also autistic.

My brain is very gender >:( If she doesn’t receive a constant supply of estrogen she starts screaming.

Yes, I’m sure my brain also wants estrogen. In my case, primarily for DNA transcription repair.

It’s well written, the choice/stats seem restrictive, I was ~75% of a couple stats and failed checks a lot and didn’t really have that many chances to boost them. It’s almost like you have to do a certain choice for every action focusing on the one stat as much as possible to succeed.
Outside of skill checks, this is well written and it’s not even a genre I normally would read. I kind of wish my antagonizing guy got along better with his handler. Anyways good jib

Okay, the first 20 pages were funny enough to warrant a purchase. It’s refreshing to see something with such a risky premise!

Congratulations on the release, Ashley. I liked when it’s WiP and definitely wanna get this.

Whooof, the endgame does not play around. Checks be strict, and choices can be quite wrong, but that makes it all the more compelling.
And the writing is stellar. Now to dive in once more, with feeling!

Lol. Both Cynthia and Norman are assholes. Just shows you can’t trust humans in a brain’s world.

I just read the first bit in the train yesterday and this seems like a really interesting premise. Mystery brains in jars (of which you are one), secretive organisation operating out in the open, zombies, mind swaps… Surprised it hasn’t gotten more attention!

I picked this up the other day and have been really impressed so far. As with Choice of Robots, I get the impression that there are very different trajectories that things can go down at the macro and micro level, though I haven’t played for long enough to say that with absolute certainty. Would love to see this become a breakout hit!

Tried playing again. Had to stop again. Still not grasping the concept at all. Why exactly are we trying to escape, or trying to help other brains escape? There’s been no threat established. There’s absolutely nothing to suggest anything is wrong with this scenario. No reason described to want to not be in this situation. It’s clear that we are trying to escape, but I’m not comprehending what the reason for that might possibly be.

You like the idea of being enslaved for other people’s profit? For most people, I think that’s reason enough to want to escape. Or at least to change things.

There could have been more buildup to the drive for it, but the core conceit makes sense, at least to me.

Except… we were never told that we were being enslaved for other people’s profit? Not even once?

Maybe that happens much later in the game, but that’s kinda pointless when we’re already planning our escape the moment we even realize we’re a brain. Like, before we even see another fucking person.