I’m having trouble with getting my startup page to look like some others I have seen. I’m sure this is a question that gets asked a bunch of times.

What I’m going for is the basic “splash screen” type of setup with the Next/Begin at the bottom without text leaking from the next chapter/scene appearing at the bottom alongside the page_break button.

My code looks like this for the most part:

How would I go about doing this not only on the startup scene but other scenes as well in case I wanted to show a break in chapters with an image like I;ve seen done in other IFs?

I am not sure I understood your problem correctly, if you are using *page_break it shouldn’t show the next scene.

Perhaps try using *finish after the image to move to next chapter.

Edit:
If you want to just have image on the screen and no text, add *page_break above and below the image.

So I tried out the page break both on the top and on the bottom of *image and passages of the next chapter still show up on the bottom. The code attempted is below:

The only instance where this doesn’t seem to happen is when I have text after the image like this:

I’m not sure if this is a me issue or the website that I’m using for my game (that being the choicescript IDE from github).

Also if it doesn’t work, can you post screenshot of the problem? 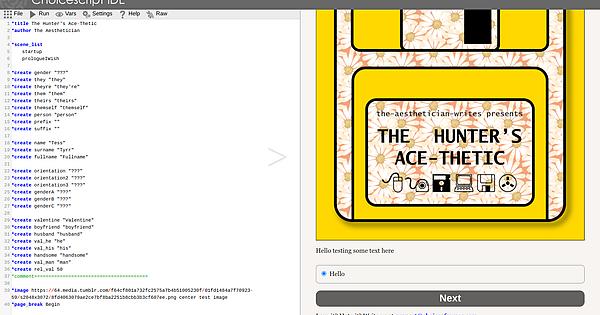 I am not sure why its doing that, I ran it in a test file and it works fine for me.
have you tried *finish after *page_break?

None of those are working.

I’m not sure if it’s because of Chrome or because of the IDE. In any case, thank you for your help.
I guess I’ll just continue by adding text before *page_break.

Perhaps you can help me now by suggesting some new editors…? I used a Chromebook for this project, but I also have a PC that I can work from. I’d just need to know what software(s) to use.

I recommend using the desktop version of CSIDE personally as its offline.

And I am sorry I couldn’t help.

I appreciate your help regardless.
Thank you for taking the time to help me!

Perhaps have the image and below it run a choice with only the option to “Begin?”

Don’t use that version of CSIDE, it’s ancient. It’s even got the word “legacy” in the URL.

If you want to use CSIDE in your browser go to: ChoiceScript IDE

So there’s been some development…

I promise I’m not this averse to technology. It just seems to hate me at the moment. I’m using dropbox for the files. And I’m pretty sure I missed something given the lack of images on (non) display. 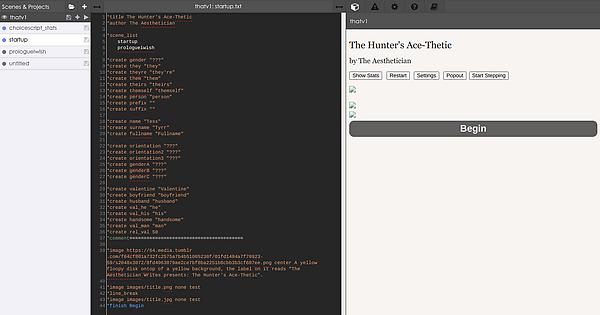 Ah, no, you’re not. That one is on me. It’s actually a pretty major bug in the web version of CSIDE: Media resources (images, sounds) don't work on web version · Issue #119 · ChoicescriptIDE/main · GitHub

It’s a tricky one to fix, so you might have to bear with me a while. Your images will work once played in the proper interpreter and the desktop version of CSIDE works fine as well.

It’s basically because Dropbox requires that you access files via their API and ChoiceScript doesn’t know how to do that.

I think I remember this happening to me on a project ages and ages ago. (Where you can’t just have the title screen.)

I just put a single full stop between the image and the page break. Not elegant, but works if you can’t find another solution.

I actually just had a thought. No idea if it’ll work, but maybe try putting a comment there and see if that makes it happy. It may or may not. Sometimes choicescript doesn’t seem to recognise additional page breaks if it thinks there’s no text there.

I don’t know if this would work but try:

I’ve just put in a quick monkey patch to fix this (only images, not sounds). Please could you try again and let me know if the issue has ben resolved? You may need to clear your cache. 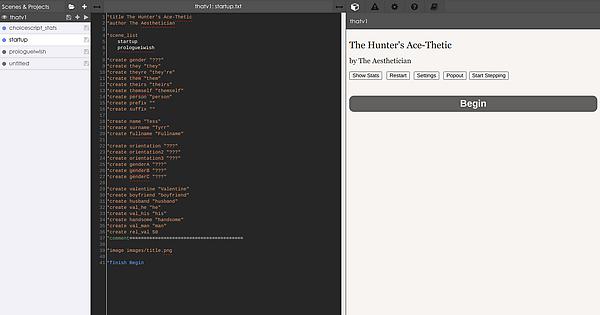 Where does your image exist exactly in Dropbox? Full path.

Yay! It works now! Thank you!

I shall now commence building a statue in your honor, ten feet high!

I’ve had issues with images loading as well, I’m thinking the file size is too big, even after resizing quite a bit. They load in my testing, but not on dashingdon if I remember correctly. Haven’t tried to add images in a while, I’ve been jumping around on my regular writing projects and just now getting back into the IF stuff. I’ll have to check it out and if I have issues again I’ll be revisiting this thread