thanks, it should be okay because I’m developing a concept and there isn’t enough yet to be a wip. a mod will move it if they think its in the wrong place.

I expect people to re-roll so I don’t mind. As long as a few people go with the luck of the roll and still have fun I’ll be happy.

This is interesting. Wish we could pick more names though.

I’ll be adding more names soon (Alex and Sam next update) . Trying to keep the available names unisex as names not used will be used by future characters (the plan is to meet members of the familys you don’t pick.)

Nice use of multiple choices on a screen! You don’t see that very much, and it has a lot of potential. Especially in giving a clear option to lie, hmm. Also generally a fan of randomized character creation keeping things interesting/realistic. You could offer the option to choose starting stats if people don’t like it (The Gladiator: Road to the Colosseum WiP does this).

I prefer Daemonglass – sphere sounds like it could be referring to another dimension or something, seems a bit more vague. Glass makes me curious, and I like the impression it gives me that Daemons can only be sealed in glass (not sure if that’s right, though!). Interesting thematically, and tricky since glass breaks so easily.

I’ll be adding more names soon (Alex and Sam next update) . Trying to keep the available names unisex as names not used will be used by future characters (the plan is to meet members of the familys you don’t pick.)

Robin would be another good unisex name.

Yeah I was worried about trying random stats but I actually like how if someone gets a low body score they get a high spirit score likewise a low mind score gets a high will score. Lose one thing you gain something else.

Your right about the glass (also mirrors) as it’s the reflection that helps capture them. And your right glass is fragile it’s why the spheres are usually kept safely locked up inside a vault.

True and suits the themes with the names.

Thanks for the suggestion.

Just a little input on the naming of your WiP. ‘Daemonsphere’ made me think of a place, like the Planar Sphere where Daemons exist or the Daemonic Sphere of Influence. As in It didn’t convey the meaning of what a Daemonsphere is in the game. Daemonglasa is at least more vague in that I didn’t get an immediate association. If first impressions count that might be a better choice.

Yeah I’m leaning towards Daemonglass myself as it sounds a much more interesting title and although the orbs are called Daemonspheres in the game that title does hint at referring more to a place.

Then why not make a poll on it? Winner gets to be the title.

Let’s ask the masses. Which title do you like the most?

demo updated with 1000 more words/code simple filler which I’ll rewrite tomorrow. Just trying to get pronouns working. Plus side you get to meet (although briefly) the three (for the moment) potential ROs Haven (your mentor) Emery (your friend) and Quinn (your rival) all of which can be male, female or nonbinary.

Demo updated with just over 2000 words/code.

Whats new: a bit of text rewritten, Haven’s intial path complete (get to see runes in action), Emery’s path is partly done (go to the library or practice with them, relax path incomplete), Quinn’s path isn’t finished. [The game should still reach the end of the demo even if you chose an incomplete path.]

The poll is progressing nicely too with Daemonglass seems to the more liked title. I’ll leave it open over the weekend and then will close it Sunday night.

Good evening my fellow CoGgers. So today is 1st November the month of the National Novel Writing Month. Well after seeing the topic go up about whether people are entering this year I decided that as the re-edits of UnNatural are done and the beta testing is going well. I decided to take a month break from writing in the Unnaturalverse so I don’t burn myself out. So this gave me a month of free time, and alongside an interesting proof of concept I had from a scrapped idea for an Unnatural (scr…

Enjoy and as always comments are appreciated.

edit: Just broke 10,000 words/code now. All intial meetings with the current planned ROs are done. The demo ends with the player going to sleep the day before the test.

Just under 10,000 words of story content now. (13,483 including code). Just taking a break before I work on the protagonist’s test. I’m quite happy with it so far. Just having to plot out the test bit soon.

So here is another question. Obviously I’ve hinted you’ll be facing daemons at some point. At one point the player will make a choice that will determine which daemon they will face. (my original idea was to let the player have a choice of four daemons (taken names are; Jack, Elizabeth, Abel and as yet unnamed fourth daemon) but as I’d like to attempt a choicescript equivilant of a “nemesis system” where the daemon will adapt/change to your choices. I’m starting to think to just focus on one daemon “Jack” then once the first draft is done then work on the additional daemons.

Opinions on the demo and answers to the question are most appreciated.

So eight days into NaNoWrMo and the first chapter of Daemonglass is complete.

Enjoy what’s there so far

Here is my own character at the end of chapter one. 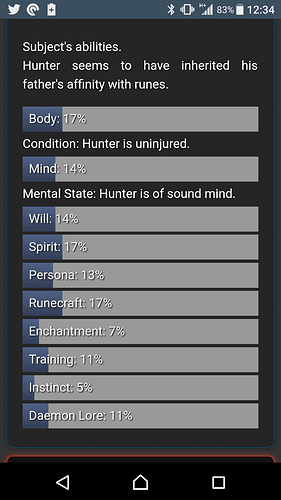 Interesting concept you have here. Its not often you see a story or game about Enchanters. Even more so about runes. I think one of the most notable times I did play anything about it, was from an old PS3/XB360 game called “Enchanted Arms”. But I look forward to seeing how your story plays out.

I wasn’t able to finish reading it, due to my stomach whining for food lol. But from what I read, I did come across a number of spelling and or grammar errors. There were also numerous spots throughout, in which there need to be comma’s placed in the sentences. But I didn’t make note of where, since I was focusing on spelling mostly. I’ll finish reading the rest later and help point out any other spelling errors I come across.