so the demo below contains chapter one (keep in mind that the chapters are going to be long due to the different dialouges + effects i have to write), which includes setting up your character and talking with the protagonist!
i’ll be updating the demo at least once every two weeks, i suppose.

here’s some basic information on the story!

NOTE: this is the link to an old version of the game–the new version will be uploaded sometime this year :>
here’s the demo link (the name in the demo link is still the former name): limitless

and here’s a quick poll! (asjfkajasdfnae)

Is this a fantasy thing cuz I saw a power stat. Is that like magic or strength?

Interesting idea, must get my Narrator voice in order, ahem… This is the story of a man named Stanley…

It’s an interesting concept and I’m curious to see where it goes. Are we part of the protagonists consciousness or are we our own, entirely separate entity?

YES! I SHALL BECOME A GENEROUS GOD… i mean… you know 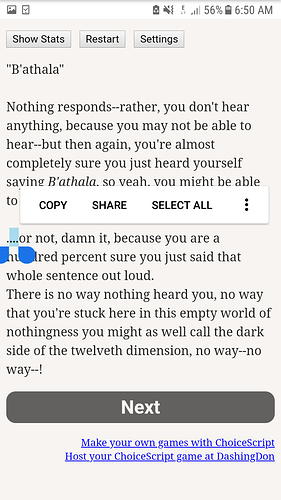 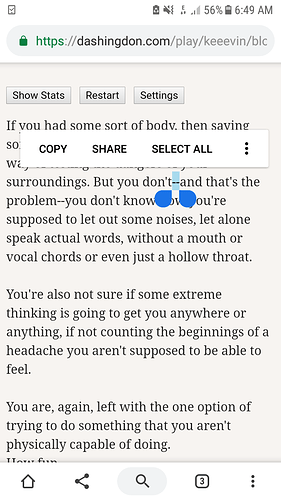 that’s a spoiler but you are a separate entity

I’m guessing we’re the little voice in the MC’s head.

Me: confess to your crush
MC: confesses and gets rejected
Me: Well, sucks to be you

claustrophobia…HALP! I’M STUCK IN A SCRIPT INSIDE A STORY INSIDE MY HEAD INSIDE MY SOUL!..

thats the best description of what I just read…

Would I be correct in assuming you got inspiration from Bandersnatch somewhat?

There’s little to go in in the demo but the premise of the story is promising at least so I’m looking forward to further updates on this!

I may not know what is going on, but I like it! Are we maybe the voice in our MC’s head?

i actually haven’t even seen bandersnatch aksjdnjdj
thank you for listing errors!
also i like using dashes because to me it makes it seem more like thoughts instead of usual narration but idk if it’s working, and most of the wrong capitalization pointed out is on purpose (but i’ll fix it anyways!)

i’m really excited for this, it’s such a unique idea!!

Your writing are amazing!

Very fun concept, if a little short on the demo so far. I have a few questions though.

So if we are a separate entity, are they aware of us? Can we talk to ourselves (sort of)? Or are we their subconscious mind? Can we interact with other entities or are we somehow unique or isolated to the MC we control?