Hi all. As a homage to the mind-boggling Missing Wings @Carlos.R and following on some of the ideas of @Charles_Parkes’ recent thread, my daughter and I added another puzzle to our game, which I wanted to share. You have got to turn off all the lights. Compared to Missing Wings, every game is different and you can choose the complexity. There is a hint system and some *script magic to let you use the keyboard directly. Let me know what you think.

To manage arrays and loops, I created a small preprocessor (in Python) which extends the language with a *for command and an *unroll command. *unroll will repeat a block of code with a changing parameter. This is needed to work around the fact that some commands (*choice, *create) can’t be built programmatically (so, a *for loop wouldn’t work). I’ll be happy to share if there is interest. 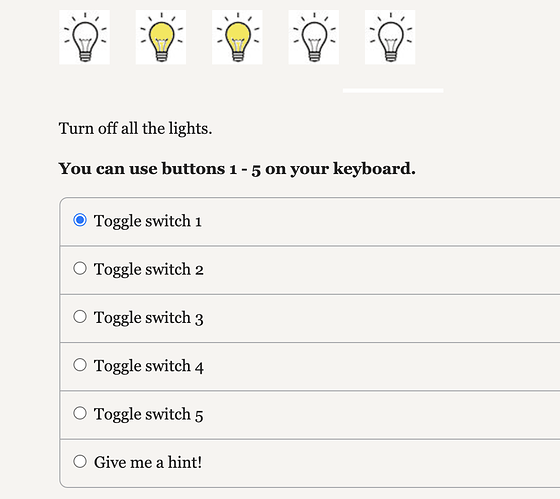 Hum that remind me of kotor 2 lol there is an ithorian in a cell. And you gotta hit switch, if you succeed it open the cell and he can run away. If you fail, he get fried lol

It look fun though, gonna give it a try .

So, as far as I can tell, there are two stages to this game: a memory game where you experiment with all the switches and see what they do (as far as I can tell it’s randomly generated) and then once you’ve mapped them all out, you flip them until they’re all off.

I think I’d have more patience with the puzzle if the first half was removed, i.e. the light switches operate in predictable, systematic ways. The hint system tells you what the switches do, but it doesn’t feel like discovering the solution to a puzzle. I think the switches should be consistent and predictable and the puzzle could be solving it in the fewest steps.

Really impressive work with choicescript regardless. How’d you get it to not freak out that startup.txt doesn’t have a traditional format?

Hi @will , thanks for the message. Let me try to answer each question.

Lights Out is an electronic game released by Tiger Electronics in 1995. The game consists of a 5 by 5 grid of lights. When the game starts, a random number or a stored pattern of these lights is switched on. Pressing any of the lights will toggle it and the adjacent lights. The goal of the puzzle is to switch all the lights off, preferably in as few button presses as possible. Merlin, a similar electronic game, was released by Parker Brothers in the 1970s with similar rules on a 3 by 3 grid. Ano...

For those who asked @Charles_Parkes, the keyboard-based input requires some *script magic. You’ll need to add an event listener to your document. Also, you must remove it immediately after the choice, to avoid phantom clicks if somebody uses the form (choice + next). This is a simplified code snippet.

Have fun with it, and let me know if you need help.