The text for the first one is better, but I like the background on the second one. Here’s some tips: maybe put the “Becoming a God…” below the dragon head or change the color to a darker red and put a thin outline to an even darker red. You can also put the title inside the parchment and choose a color (maybe #d9d18b or darker) so that it looks like it’s written there (and add a little bit of outline on the words too, if it helps). I’d help you more by actually doing it with Photoshop to help you visualize what I’m saying, but the laptop that I used to use with Photoshop is gone and now I’m using a crappy laptop that literally lags with every few clicks.

Meanwhile, I know this is just a very small thing, but I finally found a name for a major character and I’m very happy with it. I settled on a “nickname” for that character because they’ll change actual names depending on their gender.

Find names is very important, I struggle a lot to find the correct one. And the correct nick will help you attract a fan base as easy to remember names are great from a marketing point. So even if looks a small part, is an important part of it.

And thanks for your suggestions, Still, I used the dragon background for another object as fits better.

This is the first version of object letter. 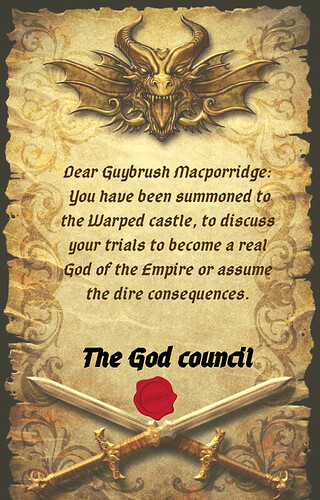 Right? I’m still unsure of the other major characters’ names so hopefully someday I’ll find something I like.

I finished the new chapter of my WIP today and am going to start editing and debugging it after work tomorrow. I’m feeling exhausted… but also good. I really hope people like it.

I have been feeling a bit stuck lately with my game. I compared my story to a classical story structure (similar to the heroes journey), and the structure of my story was a good fit everywhere except in the very beginning. I realised my first scene needs to switch place with my third… and now I have this inability to write a good start. It’s like all my demands on what the scene should and have to do makes me unable to write a single fitting or good sentence. Does anyone have any tips on how to get out of my head when I am writing, and go back to it just being a fun project without perfectionistic self-sabotage?

My personal advice is shown the first part to the person you trust and know that will tell you their real opinion without fake politeness and all that crap. Then, you have to ponder that person’s opinions and feedback with your vision and your feelings and then decide what it is best for the story.

I sort of faced a similar thing while doing my story! I’d written out a whole introduction, complete with choices and all of that, but half way through realized my first scene was a little weak–and not as fun as I’d wanted it to be. I couldn’t figure out a way to make it right.

So I skipped it.

I went straight ahead and plotted out the rest of my chapters, and kept it all in point form. Whenever I had any ideas, I wrote them aaaalll down into a “dump” document.

I think that kept a lot of the stress at bay–knowing I wouldn’t lose any ideas because I’ll always have em in the dump doc if I ever decide to pull em out again! I think most of the time (for me at least!), I freeze up because I don’t want to erase anything, in case I’d regret it later. Having all of them floating around in the dump doc helps with that anxiety–after all, you can always just copy and paste it back if you hate the new things you wrote!

While doing the rest of the chapters, I eventually found a better idea for the introductory scene. It came when I figured out just how exactly I wanted to pace the game–which only happened because I went ahead to work on the other chapters! But I’m pretty sure I’d still mess around with it until I’m really sure I like it–I think it really helps to work in “patches”. Writing scenes out and then stitching them together like a quilt–moving pieces where you need them. Dump docs are perfect for that sort of thing.

TL;DR: Work on other chapters first, and always keep a dump doc! It’s 12 am here, and I don’t know if I’m making sense, but I hope it helps!!

Thank you! I think that is what is happening with me too, and I will try both the things you suggested!

ps. It made perfect sense

I’ve never written fanfiction before but at the beginning of this month I had an idea for a character and basic plot for an existing IP and decided to go for it. I started writing it because I wanted to see how my idea would play out in an already established universe. Almost 35 pages later for just a single path really got my creative juices flowing. There are more scenes to fully write out, but I have them outlined for now. There’s plenty of branching out I could do, too, if I wanted to fully go for it. I’m just not sure if focusing on fanfiction should be my main objective at this time.

The lesson of the day: Fanfic Inspires!

I have been feeling a bit stuck lately with my game. I compared my story to a classical story structure (similar to the heroes journey),

Focusing on the Heroes Journey in choicescript was a surefire ticket to emotionaly misery and project chaos for me. It held me back by six months, caused lots of problems before I realized that Heroes Journey was my problem.

I’d reccomend ditching the heroes journey and focus on writing scenes you enjoy. Worry about pacing when you’re doing editing and rewriting. Scene structure, stakes, interesting dilemmas all of these things are ten times more important than Heroes Journey.

Heroes journey is better suited to movies than games in my opinion.

The last few days, I have actually been writing a bit.

I have also been assembling some new miniatures I bought, and I think using my hands that way is making it easier to wrap my head around the writing process.

I need Beta Testers for my first wannabe Hosted Game: Back to Donkey Island!

You’ve been so kind so far supporting me, let’s do this final phase together!

You can find the thread here: Back to Donkey Island Beta-Testing

THANK YOU for all your support.

I will send you all my feedback via pm this weekend, I am busy with my entry right now

Looking forward to reading YOUR entry

Good to hear about everyone’s progress.

I’m rewriting, hoping to get to the 25% mark in the project’s rewrite at the end of the month. It’s a major rewrite and restructuring. I’m really enjoying it and I feel like I’m making good progress.

January has been tough for me. I planned to post an update for my WIP at the end of the month, but flu got in the way. Still, the portion I uploaded got meaningful feedbacks, so I’m still grateful. I’m also averaging about 1k-2k words per day, so I guess that’s a good thing, too?
Nevertheless, I’m enjoying everything I write and the characters I’m about to introduce to the readers.

Well I guess I’m scrapping my entire chapter 2. Writing down all the scenes and describing every action and dialogue that I can see in my head apparently isn’t a good way to go about this. Or giving every little thing background info. Explaining what this is and what that is so that everyone knows. The pacing is completely off, too slow. There goes 16k words.

This is so very different than article-writing… I very much do not like to have any loose ends in my articles at all. Everything has to be neatly wrapped up in the end.

You should see this as a good thing, you are learning about pacing and how get the flow. The chapter could always be used later on as a lore index.

I really think that most games should be kind like a newspaper highlights. When, who, what, and that should be the main content. And let the hints player throughout dialogue and other characters’ behaviour the why and deeper reasons.

Because most players don’t care about deep lore about Mountains if is not something that deeply moves into a player.

It is comparing The Silmarilion with The hobbit. If Tolkien would have Started writing the first nobody would have known him.

That’s a good idea! I think I’ll just move off this entire thing to a glossary or something like that, and rewrite this entire thing. It’s not deep lore, so I’ll try my best so that readers can understand the words from context.

January report: I wrote nothing!!!

In all seriousness though, I am a little disappointed, but I had mental health issues to work on.

My draft will be there when I’m done sorting through the beautiful mess that is myself and after that I can hopefully tackle it with more enthusiasm than I would’ve had if I had forced myself to work on it when I wasn’t mentally all there.

Also I think I need to make this a sticky note or something. 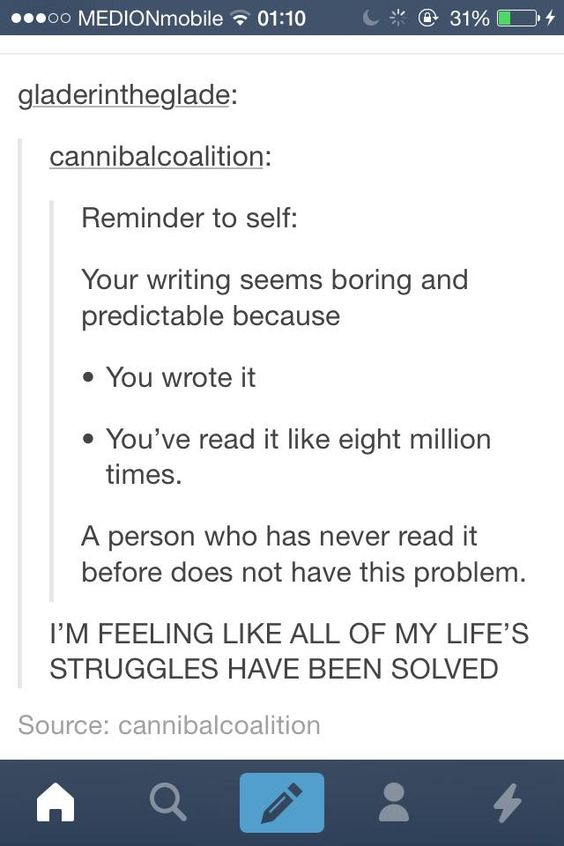 I have a Pusheen calendar that I am going to make the most of this upcoming February!