The city of Airosa has fallen. Or, at least you think it’s fallen. The abandoned buildings, lawless slums, and debris from some sort of fallout or disaster littering every nook and cranny don’t leave much to the imagination. Unfortunately, your imagination is all you have out here. You don’t remember anything before at least four years ago, and the robot you built can’t quite seem to remember who you are, let alone anything before you built him. And then there’s the nightmare. Night after night, it’s always the same—and though you’ve tried to decipher it, you’ve never had any luck.

Countless years of same, same, lonely same. Until one night you get a knock on your door that will change your life forever—a call of fate.

Do you answer it?

Found this WIP through tumblr, it’s really intriguing so far! I can’t wait to read more.

I’m quite interested so far! (Also your header image is A+.) I don’t like dystopias as a general rule, but this has drawn me in anyway. I like that there are still functional things like the market going on.

Seems like there’s plenty of coffee to go around? We didn’t seem worried about being able to get the coffee, just replacing the maker. (A percolator would be a good investment; less parts to break and they make good strong coffee! Not so much a recommendation for the story as a general observation.) Are food supplies in general pretty available? I don’t know that it needs to be addressed in the story, I’m just trying to get a better picture of the setting itself.

The interaction with Gateway was really well done. Felt menacing, the jerk.

I got an error toward what is likely the end of the demo.

Will our relationship with Skip be set, or is that something we’ll get to choose going forward? I think it would be an interesting option to explore, although it would definitely add another layer of complexity to the coding and writing.

Will this game have an RO option for straight men?

Interesting so far. Can’t wait to see where this goes

As for any bugs i did find this 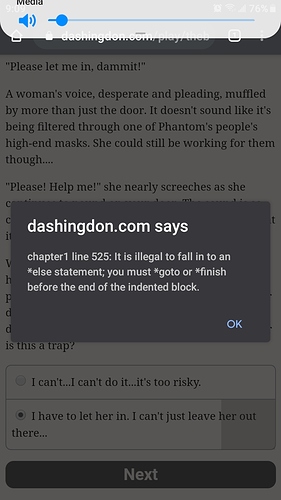 nope. there are only three ROs and their sexualities are already set in stone, as far as i’m aware.

It’s quite interesting. Can’t wait for the update~

Thank you, I’m glad you’re enjoying it so far!

Your relationship with Skip will change over time, even if he’s not right there with you. You’ll get a chance to explain your feelings about him later.

And note to all: I’ve updated the game so that line 525 error should be fixed now!

Also, no there will not be a romance option for straight males. However, this is not really a romance game. Romance will not be a big part of the game at all. It’s more of a bit of flavor, I guess you could say. You won’t be missing anything.