Idea for a vampire game (Updated!)

Hey guys, I’m new to the Choice of Games group and I have to say that I LOVE these games! So much so that I’m going to be trying my hand at one myself. And I’d absolutely love advice and feedback. Updates will either be very fast or extremely slow, it totally depends on what’s going on in the real world I’m afraid.

Basically my idea is this (sorry if it’s been done or cliche):
Your character is an old vampire, one of the oldest known vampires alive currently. Unfortunately there’s one big draw back. You were turned as a child, and have kept your child appearance. Now, in the age of technology and change the vampire governing body has decided that vampires, especially older ones must be taught how to adapt and live in this society so that vampires can remain a myth. You, willingly or not, are forced into society to learn and because of your appearance is given a chaperone. An adult vampire who can travel with you to avoid the ‘suspicion’ of human society. On top of all of this, you are also thrust into bloody vampire politics where murder and power grabs are among the norm. Will you take advantage of the changing times? Create a reputation for yourself? Will you fight your way to the top of the vampire totem pole? And what on earth does YOLO mean?

Update! Alright folks, I’ve got some messages recently about whether or not this is still in production. Currently this is in hiatus, but I have every intention of getting this finished. Sadly real life has gotten in my way so I just haven’t had the time to sit down and blast through this. Thanks for the continued support!

I changed your title to something more descriptive. I love the idea, and am looking forward to seeing what you do with it.

This doesn’t work, it only does for you because your scene files are on your computer. Here, this is where everyone’s been posting their WIPs since Dropbox dropped the ball:
https://dashingdon.com
Just upload your scene files and you’re good to go.

I’d be one flirtatious little kid/elder. But yeah it sounds good.

Thanks, I’ll do that right now

To share your game with others you’re going to need to upload it online first.

https://dashingdon.com/ is currently the place a lot of people use.

I think being a child is going to put some people off.

People play vampire games so they can sparkle in the sun, be dark and brooding and seductive! Or to be a monster! As a child, you can’t do that so much.

Which isn’t to say it’s not an interesting concept. With Claudia in Anne Rice’s Books, and Eli in Let The Right One In child vampires can be really, really creepy.

BUT! Starting us as one of the oldest vampires, isn’t that us beginning near the end of our story?

What if we started out as created by this child vampire who wanted to learn about modern society? So Vampire Baby Sitter! 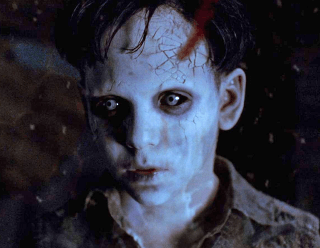 One of the squickiest things to come out of horror movies is the descending age bracket for The Undead. It used to be only adults could be/were made into undead, and while children were presumably killed off-screen during the Zombie Apocalypse, …

I think children can be much, much more terrifying, especially immortal children.

Starting us as one of the oldest vampires, isn’t that us beginning near the end of our story?

I see it as someone who’d be so set in their ways and out of touch, starting over would be that much more of a challenge. It also contrasts drastically with the outward appearance of being so young. I think those things are what make the character so interesting, and I’d like to see them stay the protagonist.

Yeah that’s the type of feel I’d like to go for. That the vampires of this age, or at least the ones in politics see themselves as a more ‘civilized’ group and for the betterment of vampire society they have to educate the vampires who are to stuck in their ways to benefit from the changes in the world. Also I think it would be pretty funny/badass that your character could do something incredibly ‘old fashioned’ and have a bit of backlash for it.

cool, thanks for saying. It’s just because that’s all I’ve done so far and haven’t finished it properly.

thanks, i’ll try fix that as soon as possible.

A suggestion that will help with future incidents like this- run quicktest. Just double click the file labelled ‘quicktest’ in the dfabulich folder you downloaded containing choicescript; and pick a web-browser if it asks for a program to run it with. It should point out the game-crashing errors for you- though you’ll need to fix each before running quicktest again to have it catch the next.

Oh cool, thank you so much for pointing that out.

It won’t catch things like continuity errors or spelling errors, but it will catch mis-codings and catches almost everything that would crash the game.

How are you one of the oldest and not on top?

I was thinking that until this point the character had never been that interested, they always kept up to date but didn’t get involved unless it directly effected them. But yeah because they are so old im thinking there was a certain respect that it granted the character, maybe they will have some sort of role but maybe more of a formality? I’m still not settled on everythgin just yet, I just wanted to get somethung down before I got distracted and forgot about it.