How do you make your outlines?

how detailed of outlines do you use? how do you make the outlines?

I used paper first to jot down my ideas. Then I used twine so I could visualise the branching. Then I moved on and did it in choicescript.

The tool here CrumblyHeadGames Gamebook Authoring Tool looks interesting though. I haven’t tried it out though.

I create an outline from the mangled corpses of half-forgotten ideas, lost daydreams and a lot of what-ifs.

How you go about creating one is as much a personal process as is writing. What do you want to use an outline for?

In general, it’s a way to see the steps in the story you want to tell from beginning to end. An outline doesn’t have to be fixed nor something you should see as concrete because often when writing the story new threads develop that results in me adjusting the outline.

Whatever medium you use to create one, I suggest to just start writing one - even if it’s short -, it might not be to your satisfaction but remember, in most cases when working on a personal project, nobody but you need to see the outline so just have fun with it and see where your mind takes you.

Want a story event where a T-Rex bursts through a shopping centre and noms on the weekend Santa? Go for it. The fiddly bits where you work out how this is possible and what part it has in the story is half the fun in outlines.

With that out of the way, here’s a few links that offer suggestions. Don’t take the advice as gospel and find the process that works for you. 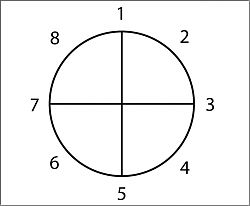 By Dan Harmon. Storytelling comes naturally to humans, but since we live in an unnatural world, we sometimes need a little help doing what we'd naturally do. Draw a circle and divide it in half vertically. Divide the circle again horizontally....

How To Write A Novel Using The Snowflake Method

How to write a novel: Award-winning novelist Randy Ingermanson teaches his wildly popular Snowflake Method for designing and writing a novel.

25 Ways To Plot, Plan and Prep Your Story

I always advocate learning how to plot and plan because inevitably someone on the business side of things is going to poke you with a pointy stick and say, “I want this.” Thus you will …

With specific regard to interactive fiction, @FairyGodfeather suggestion of Twine is an excellent one. I tend to use mindmaps for that purpose.

Each ‘chapters’ are broken down into mini-scenes and colour-coded according to the decisions that results from it which makes it easy to track down the various threads.

However you go about it, I wish you good luck!

I’m struggling with outlining my story as well. I’ll try some of the tools suggested above to remedy this.

Part of the problem (apologies if I’m hijacking the thread) is that I don’t have a clear view of the conflict that is supposed to drive a story forward. The central ‘problem’ (the one at the heart of any good story) is as ill-defined as my protagonist. I think that, in trying to account for a myriad of possible player decisions, I’ve diluted my story and lost sight of the driving force behind it.

But at the same time, the scenes that I have finished are incredibly linear and full of fake_choices.

It’s very difficult to plan a story you don’t have a clear picture of. I suppose I’ll just keep writing until something coherent takes shape. At the moment, trying to plan things out is counterproductive.

It’s a frustrating process trying to conjure something concrete out of half-imagined ideas.

Honestly, at this point, I only write a gameplay outline, a small plot beat-sheet, and blurbs on the key characters’ personalities and approval factors. By gameplay outline I mean something that describes in as mechanical a way as possible how the game flows. It lists out choice types (usually things like “skill challenge” or “emotional response” or “relationship decision”), stats and their uses, as well as how the player will generally be introduced to things. The plot beat sheet is something like “Player gets attacked by bandits. Player goes into town to locate bandits. Romance culminates. Player murders the everloving shit out of bandits. The end.” And character blurbs should be obvious, but I focus on their personal ‘rules’ so I can easily wing their reactions to what the player does. Once I know these things, the sky is the limit for what writing I can do.

Doesn’t work for everyone, obviously, but I just thought I’d show that it is possible to get away with very little outlining.

I’m also a very-little-outline person – I know where things are going, but I write it as I go, with ideas that would never have occurred to me before I started writing that section.

@SpaceLesbian thanks for the feedback, it seems simple but still really helpful!

@WUBWUBWUB It would be a big struggle to write something without a clear idea about over all flow and plot and stuff… I guess there are many different things to think about when writing interactive fiction. Characters, plot, possible choices, different paths, different endings, reactions of other characters to your choices and so on… there is a lot… more complicated than normal fiction. so I guess the first step behind even out-lining would be to have a lot of info set in your mind. what I am starting to do is thinking through who my characters are, what there past is, how that effects who they are and possible choices, how they think, how they act and see others. I have a basic idea about the main conflict and plot and even the ending which is also super important. I think coming up with the ending of possible endings can help with making the rest of the outline. to me it’s coming up with the little stuff in between that’s hard. like where do I go from here? and such… just a lot to think about.

I’ve got the beginning and end figured… But no idea what to do with the middle… I feel like that’s gonna be a problem, but I’ll drive off that bridge when I come too it. I tend to build the back story and characters first with the knowledge of where the story will end, but no idea how to get there.

When I started, I had a clear outline, conflicts, detailed character sheets, etc., but as soon as I started writing in choicescript, I started tweaking little things here and there. Before I knew it, I had changed my mind about almost everything, and my outline, char sheets, etc. were obsolete.

I had been putting it off, but your post makes it obvious that I should go back to the planning stages. Cheers.

Yeah… outlines seem to be pretty important. so what I have been thinking about is that maybe it would help a lot to go ahead and write a coded outline, meaning go in and make a very basic written ideas of the story in choice script. and make sure all the choices make sense and flow and major coding works and then go in latter and fill in all the info… does anyone do that? it makes a lot of sense to me. it seems making all the code work if half the battle…and of course writing any fiction can be a beast.

I think you just saved me months of frustration.

seems like a good idea to me and just wondered if anyone else did that…still trying to figure out how to do that.

Some shameless self promotion here, but I just released Chronicler, a visual code editor for choicescript. It’s great for making outlines and when you’re done it makes the choicescript for you so you can focus on writing the story and branching narratives! (:

Chronicler is a visual code editor for ChoiceScript. It allows you to design your novel in a flowchart layout, and have the CS code generated for you! Incorporating all the advice from good forum users such as yourself, I am developing Chronicler into what I hope will become one of the most popular tools for both beginner and veteran novelists. Where you can focus on writing your story rather than scrolling through long sections of code. Chronicler Online Announced! All further efforts on Ch…

@BenSeawalker… ooh wow, how does it work?

@RockStarPenguin Check out the screenshots. It’s best seen in action though as it’s all animated.
It’s also open source, so if you want to see how it actually produces the code, look at data_to_choicescript in the scripts folder.

For me, outlines are something always kept in the back of my mind, then I go enjoy life, watch movies, watch anime, and most importantly read novels and books that interests me, but in all those things that I do, I think of how those ideas can inspire and improve my outline.

Was going to make this thread but noticed it already existed. So, let’s bump it!

Outlining is absolutely my weakness as a Choicescript writer. The language itself isn’t the struggle, nor is writing the sections. It’s figuring out how to make sure I get from Point A to Point B without rambling off-course. Most of my editing involves scrapping a section I’ve already written in order to create a different scenario that better flows into the next choice I need the player to make.

Right now, for example, I realized I boxed myself into the first section of my WIP by forcing it to occur in twenty-four hours, so I need to make sure all my choices and options make sense in that period. I tend to haphazardly plan a vague idea of ‘we start here, this thing will need to happen, and once we get there we can follow paths like this.’ Then I just write blindly, until I inevitably hit a snag of some sort. You get this feeling in those moments like, “Ohhh. This is what planning is for, isn’t it? Oops.”

I noticed a lot of people used Twine to outline and that’s really great for visualizing with the boxes! I was curious though, how do you structure your outlines? Around plot points, choices? Just curious!

Most of my outlining is done with a marker and scrap paper, or poster board if I need something bigger. I tried using spreadsheets and software, but I keep coming back to the markers. I use a lot of arrows.

For the most part, I structure my outlines by scene, and then the individual choices suggest themselves as I write it.

I turn on some music andlet my imagination go wild

My outlines are very detailed. I keep everything saved on my computer, but most of the actual planning happens on paper. I write ideas down as they come to me throughout the day, and then I integrate it into the Word file. I also split up the outline into plot, characters, major themes, etc. Oh, and I usually create a soundtrack to inspire me; the overall story receives a few songs, and each major character also gets their own song.