Hollywood Visionary: Make the movie of your dreams in 1950s Hollywood! 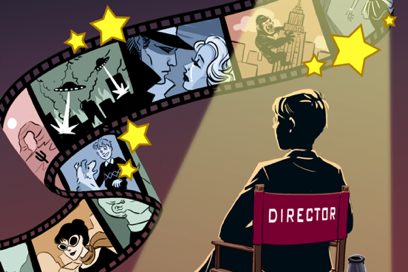 Hollywood Visionary: Make the movie of your dreams in 1950s Hollywood!

We’re proud to announce that Hollywood Visionary, the latest in our popular “Choice of Games” line of multiple-choice interactive-fiction games, is now available for Steam, iOS, Android, and …

We’re proud to announce that Hollywood Visionary, the latest in our popular “Choice of Games” line of multiple-choice interactive-fiction games, is now available for Steam, iOS, Android, and Kindle Fire. It’s 40% off during launch week.

Make the movie of your dreams amid the glamor and romance of 1950s Hollywood!

“Hollywood Visionary” is a 150,000-word interactive novel by Aaron A. Reed, where your choices control the story. It’s entirely text-based–without graphics or sound effects–and fueled by the vast, unstoppable power of your imagination.

As head of your own movie studio, you call the shots: hire Hitchcock, seduce Garbo, build your studio into an Oscar-winning powerhouse or star in a B-movie train wreck. Control everything about your production, from genre to casting to building up buzz.

Do you have what it takes to become a Hollywood visionary?

About the Author: Aaron A. Reed is an award-winning author of interactive narratives. His games have been featured at Slamdance, IndieCade, IndieCade East, the Independent Games Festival at GDC, and in exhibitions of “electronic literature” around the world. His textbook “Creating Interactive Fiction with Inform 7″ is the leading reference on the popular language for digital storytelling. His interactive novel “Blue Lacuna” was named one of the Top 10 Interactive Fictions of all time in a recent poll. Aaron lives in Santa Cruz, California.

We need your support to continue delivering our games on Steam. Our goal is to release our entire catalog of interactive novels on Steam. Based on the extraordinary performance of Choice of Robots and The Hero of Kendrickstone, both which made it onto Steam’s front page this year, Valve has allowed us to ship a handful of additional games. We’ll need to continue to deliver outstanding results to prove that interactive fiction can be successful on Steam.

We’re asking all of our fans to follow us on Steam. Even if you don’t use Steam that much, it will be a big help if you sign up to follow us there, because the more followers we get, the better visibility we get on Steam’s curator list. (Our goal is to hit 3,000 followers for our Steam curation page; we’re about 45% of the way there as I write this!)

We hope you enjoy playing Hollywood Visionary. We encourage you to tell your friends about it, and recommend the game on StumbleUpon, Facebook, Twitter, and other sites. Don’t forget: our initial download rate determines our store ranking. The more times you download in the first week, the better our games will rank.

Just bought it on steam. Hopefully I’ll be able to give a positive review, but we’ll see once I’ve played it a few times.

Gotta say i was hoping it was a bit longer. I know Choice of Robots was amazing, but it was more than twice as long.

Obviously quality trumps over quantity, but I was still hoping it was a bit longer.

And it’s awesome news that Tin Star is on Greenlight. I went and voted right away

I have to say that this seems like a nice change of pace from the standard “adventure” story.

Obviously I won’t know until I read it, but I’m guessing this is one of the few CoGs that doesn’t feature unrealistic/fantasy elements?

Buying it today to find out.

I love fantasy, sci-fi, adventure stories. I suppose you’ve hit the nail on the head for why Hollywood Visionary hasn’t really clicked for me, because I just love those sorts of fantastical elements.

I’m not saying it’s a bad game, mind you and I think it’s great that Choice of Games do put out games that cater to all tastes.

I think, Slammed!, Thieves Gambit, Rockstar, Willow Creek, and Broadsides, all lack in fantasy elements. (I could be wrong mind you.) I’m not saying that they’re realistic though.

NOLA actually has some fantasy and science fiction elements at certain points in the story.

I never got that far. I’ll scratch it off the list.

I think there is a bug on the demo game when giving the grip a custom- first/last/both first and last -name. It keeps saying a character already has that name even when I input different names.

Are you using the web version? Try refreshing the page.

I’m using the Steam version, and there is a spacing error at this point:
…
She

sounds like she’s got something when she finally returns your call. “Guess what a little bird told me?” she says. "She puts a lot of stock in society manners, and doesn’t take kindly to folks who thumb their noses at them. Think that might come in handy?

Loved the demo, the sheer range of genres and actors and those impressive lists of achievements is just wonderful, so I will definitely pick this one up. Especially love the relationship with the Niece, games really should have more family or non-platonic relationships to develop.

Yep, just bought this on Steam. Not afraid of low quality in the slightest.

Tin Star has been my favorite game of both CoG and Hosted Games so far, though the Heroes Rise series is rather close. Tin Star is, imo, the most deserving game to be on Steam no matter what reception it gets.

As someone with too many standard when it come to choice games, i have to admit that I really liked this one. It was a good change from all the action focused games and I liked the choices, even the small ones came back later in the game to surprise us. Just a quick question tho is there any way to find out who set the studio on fire?

I dont speak for the author but in most case its just because some persons dont feel comfortable with some pronoun. Or are agender wich is a non binary gender. It also include genders for trans player.

I just beat Hollywood Visionary for the first time.

Turned out to be fantastic. Like one of the best CoGs on the site. That really surprised me, since I didn’t think I’d be sold on the concept. I remember I had the same kind of experience with Choice of Robots, where I ended up pleasantly surprised.

It’s CoGs like Hollywood Visionary that make me wish we could spend more money on the game. I suppose I could just buy it twice – which is what I think I’ll do – but I wish we could give more to the authors themselves.

Anyway, I’d give HV a 9/10. I do have some questions about how to earn certain achievements, which I’ll ask at some point. But I truly enjoyed Hollywood Visionary and thank both the author and CoG for making it available.

I think it’s fun to experiment here, like, wearing a combination of feminin and masculine attire when you are specifically identified as one gender or instead agender. I have to wait till monday before i can buy it tho.

Bought it last night. I loved it! Starting on my second playthrough before I have to go to work.

I have been awaiting the release of this game for a while now and will be getting it soon. I do have to admit that the total number of words, 150 000, did made me slightly hesitant about making my purchase since I expected a longer length for this particular game.

Hello,
I really like your story and I would love to continue however I keep running into a problem.

I really do hope this error gets fixed right away so I can continue playing (I am having a lot of fun with it up to that point).

Bought it, played it, loved it. I especially loved the development of the ‘niece’ character. It’s the first time a CoG title ever made me feel depressed about being an only child. Thanks a lot, CoG!