Gladiator: Road to the Colosseum (Out Now!)

@everyone
Also, I’m aware that the Upcoming Hosted Games Releases – 2019 thread states that this is going to be released in about 24 hours! But as excited as I am, I just want to temper everyone’s expectations cause I think (?) it wouldn’t be released so soon. That said, I’m almost exploding in anticipation and I hope everyone is as well!!! Hopefully the first release of 2019 wouldn’t be too shabby? nervous laughter

Hey everyone, so they’ve really pushed back the publication date and I can understand everyone’s disappointment, but I’m sure CoG would have their own reasons, and I’m more than grateful for all of your patience thus far! Thank you so much!!

@Steveth
Thank you! I’m really glad to have gotten this out too

Hope you enjoyed it!!

@Taylor_Enean
Given the number of people on the forum asking for steam releases, there might be other considerations that we might not be privy too as well. But yes, I’ll definitely be excited to see this on steam for you guys!

@idonotlikeusernames you mod the games as well? What do you change though! Also, what’s this keeper game everyone keeps talking about? Time for me to crawl out of my hole and play this.

I suppose with multiple releases, there’s a chance of cannibalization as players are given alternatives, which might mean that they could do better if released individually! (just speculation of course). I also find your abhorrence of apple thoroughly amusing hahahaha, is it just the interface? or the difficulty of publishing on their channels?

This cracked me up hahaha

I have been looking forward to this game coming out for a while now.

No way… aren’t you the editor working w/ seraphinite on wayhaven book 2? gasp Thank you so much for your kind words!!!

According to the 2019 Hosted Games Thread, it is delayed to the 17th (in two weeks).

Ahh good to know, thank you!!

didn’t it get delayed in December too?

Yes, unfortunately, but well on the bright side, I now get the honour of kickstarting 2019 off hehehehe

@resuri08
And I was just enjoying seeing the diverse timezones represented on here… hahaha thanks for getting the thread back on track!

@Jay_Tarrant
Wow truly living life on hard mode going for a non-strength build in a Gladiator game. Why would being rich be a handicap though! And what do you mean by ‘correct’ action hahahaha

@everyone
I actually normally opt for random creation most times hahaha. I didn’t realize everyone went for such diverse origins! Do y’all feel like certain race/builds give a larger advantage over others?

Also, shameless plug and sorry for the spam (for those who already know) but I’m trying out this community Let’s Play experiment on social media (mainly Instagram) and it’s been a fun few days! Do check it out and give it a follow! (hopefully it whets your appetites till the 17th, or whenever!!!)

After this I’d probably want to focus on giving updates on “Sir Yes Sir!” via socials - a long forgotten WiP that I’ve been chipping away at and I should definitely get back to >.< Here’s a sneak peak to make up for everyone’s disappointment!!! (I’m experimenting with a coarser, more vulger/visceral style so… pardon my language!) 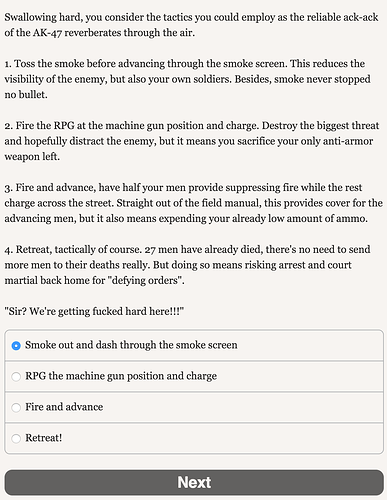 @Jay_Tarrant
Wow truly living life on hard mode going for a non-strength build in a Gladiator game. Why would being rich be a handicap though! And what do you mean by ‘correct’ action hahahaha

Yep, probably not that clever in the long run but it is very funny that though my character is horrible at fighting, they have pretty much mastered the art of war

I like a more strategic, clever build. I was not saying that being rich is a handicap, just that focusing on learning is. Though I can see the confusion. Furthermore I interpret the ability to hire bodyguards as reducing ones skill or desire to fight.

By correct action, I mean that in some fights there are obvious advantages you can gain. Fighting with the sun to your back is a correct action, ducking a kick from your friend is not. But backing away is. Some are dependent on defensive stats like leadership or intelligence though. Then there are choices that match your offensive/fighting stats like agility, strength, etc. Choosing those options in a fight will, for the most part, help your character. I focused on leadership, agility, and intelligence and was able to ace the fights that I took part in. Though I did not play that far through, I wanted to wait for the full release so that I was not aching to find out what happened next.

In answer to whether some builds are better than others, it depends on whether your life is randomised, chosen, and what choices were made. I think they are probably all equal.

Race should of been nationality since back then race wasn’t really a thing.

Which origin will everyone try first?

I always choose a Greek noble, because it allows the min-maxer in me to have an MC who is balanced in all stats and speaks Latin

you mod the games as well? What do you change though!

Depends, mostly little tweaks to stat balance. My most extensive mod to date has been for XoR, where I’ve made it possible for myself to obtain both male Breden and Simon. I have also, in the past corrected instances where my mc got misgendered in dialogue, without needing to wait for an official patch to pushed through.
Still, not being able to change anything at all on the website version, nor being able to play offline, as well as the fact that with the website version I have to finish a game in one sitting or lose my progress (which is pretty much going to limit my opportunities to play to the weekends) are all going to be frustrating, but not half as frustrating as “mobile” gaming would be.

what’s this keeper game everyone keeps talking about?

Keeper of the Sun and Moon. A magical university (not highschool for once and the mc is a young adult) game with lots of cute ro’s. The Hosted Game slated to be released after Gladiator.

I think I may have already commented on this before, but what the heck. Greek, male and poor for me. And determined to get his revenge on that Kraterous brat!

Which origin will everyone try first?

Egyptian. There’s no real reason behind other than because I’m Egyptian, so I instinctively chose that race.

As for class, noble. I feel like that would allow for the most character growth, to be honest. Poor MC’s are probably already accustomed to the shitty conditions of slavery and the middle class can somewhat manage with it. But for a high ranking noble to be stripped from all of his fortune and glory and get demoted to a common slave? Now that’s something I can work with.

Am I the only one here who plays as someone from Gaul?

I don’t play as the child of a Egyptian merchant for stats, thought it helps because you learn different languages, but mostly because i enjoy this background more than the others, i still haven’t played as a poor Egyptian and have no interest in playing as a rich one.

is only me that have lost a lot of interest in choice of games lately?
I mean last year almost not buyed anything from cog label, and this year is looking also more interesting Hosted games than cog (so far only exiled of gods and tale of two crane are appealing to me) while in hosted there is going to be a lot of games like gladiator, keeper, dragon racer… and who knows how many wips i already have read will make it before this year ends…

Egyptian. There’s no real reason behind other than because I’m Egyptian

Egypt is cool, but also sadly quite anti-gay these days.

As for class, noble. I feel like that would allow for the most character growth, to be honest. Poor MC’s are probably already accustomed to the shitty conditions of slavery

I disagree. While the poor mc’s may already be accustomed to not getting respect and shitty conditions, what even they are not accustomed to is the level of unfreedom and brutality that comes with being a gladiator slave. Ironically, with a decent master being a farm or plantation slave was probably a step up in order of food and security, though not freedom. Being forced into becoming a gladiator slave definitely makes it worse as it is a life of violence that one can expect to be short, without the usual “rewards” of being in an army or bandit gang (loot, pillage, rape). Even if the mc comes out of being a gladiator alive, they’ll likely have suffered an incredible amount of trauma, both physical and mental.
Also depending on how closely @nauhziy chooses to adhere to the historical manumission our poor mc’s may find that even manumission from being a gladiator slave isn’t worth all that much and in some ways being manumitted as dediticii was much worse than still being a slave.
Therefore if this game has manumission I hope it is the Ben hur type, whereby the mc’s actually become Roman citizens and not persons deemed too legally incompetent to even engage in contracts or designate their own heirs.

The one historical exception to that was catching the eye of and being freed by the Emperor, who could basically make up any legal conditions and pretexts he wanted, including “custom” conditions and rights for manumission. But then catching the eye of the Roman Emperor, assuming this is set in Imperial times carries with it many dangers of its own. As being tied to the emperor as your “patron” after manumission was many times more dangerous then having virtually anybody else as a patron. Also more potentially rewarding, to be fair. But then to enjoy the rewards one needed to be alive in the first place.

@nauhziy
In chapter 1, playing as a Gaul, in a Noble family.

“Polite… good boy. Let me introduce… this is Roman lash… You barbarian… do bad… Roman lash hit you”

Add a full stop after the bolded word.

U r not alone

I leave my fate to the gods when choosing my origin. I like having to work with what I’m given.

Spotted an error in the demo:

"We know you. And we absolutely idolize you, Flavius. Back when we were slaves in the House of Cato, the only thing we could think of was the tales of your exploits on and off the sands.

My mc was a slave in the house of Brutus and D. was too.

… All you guys thinking about min-maxing stats and I went for story decisions!

Oh boy. Should make my first run interesting… I’m going Greek merchant family for my first run. It didn’t even occur to me to see how that affected my stats as I played along. I just thought it would be fun to play someone from a semi-prominent family getting taken out of their element, playing as part naive but realist at times.

@nauhziy Yeah, Sera was the one who turned me onto this WIP.

All you guys thinking about min-maxing stats and I went for story decisions!

Same here, never though about stats, just went with what seemed right for the character. Probably will end badly then.

I am not an inventor