Fool! — Jest your way from obscurity to royal acclaim! 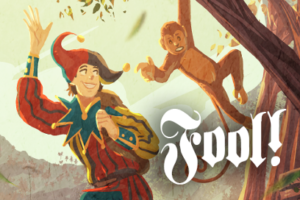 We’re proud to announce that Fool!, the latest in our popular “Choice of Games” line of multiple-choice interactive-fiction games, is now available for Steam, Android, and on iOS in the Choice of Games Omnibus app. It’s 30% off until May 30th!

Jest your way from obscurity to royal acclaim as the King’s pet, beloved by all! As a talented young court fool with dreams of fame, scrabble with other young jesters to secure prestigious positions in the courts of Brenton’s nobility. In a royal court humming with intrigue, keep them smiling as spies, assassins, blackmailers, ambitious nobles and a reluctant Heir wait in the wings.

Fool! is a 420,000-word interactive fantasy novel by Ben Rovik. It’s entirely text-based, without graphics or sound effects, and fueled by the vast, unstoppable power of your imagination.

Dive-roll into the tightrope world of Brenton’s courtly entertainers, where your jests can see you seated at the right hand of power, or set down to the gallows.

What manner of fool are you: the shrewd knave ever ready with a venomous quip? The renowned artiste at pains to stay above the political fray? The bawdy buffoon known as much for off-stage antics as on-stage mirth? Or the clever counselor whose real audience is the noble ear they whisper into? Face unruly audiences onstage and skulduggerous schemers in the wings! Can you sling keen jests and still evade the whipping-post and assassin’s blade? The kingdom itself will be shaped by your choices!

• Play as male, female, non-binary; gay, straight, bi or ace.
• Evade tossed produce, whippings, assassins and the stocks with your wit and quick feet!
• Battle a lifelong rival for artistic glory within a secret society of writers and gadflys!
• Train your pet ape to master prodigious feats, or at least to stop biting you!
• Mediate between nobles to forge compromise; or stir them up to your own advantage!
• Partner with fellow thespians to win friends, or upstage them to win glory!
• Balance your passion for the limelight with your passion for …passion!

When the Master calls, you’d do well to come running—with bells on!

We hope you enjoy playing Fool!. We encourage you to tell your friends about it, and recommend the game on Facebook, Twitter, Tumblr, and other sites. Don’t forget: our initial download rate determines our ranking on the App Store. The more times you download in the first week, the better our games will rank.

At least halfway to the end (whilst MC is half-wise) and I have fully (Fooly!) arrived at speechless…

Comedically timed, too, as Fool!'s very dialogue is my truth and happiness. It just feels like home.

And I would like to shake the author’s hand with a rare exuberance to the tune of twinkling bells and inappropriate satire.

Why, if your kink is wordplay, you shan’t regret this purchase, my royal darlings.

No one wants to play the fool in life, but now I do. I do.

Possible sequel entitled Furfur! in which we fruitlessly search for his second banana only to tumble into a mirror at the end and see that it was us all along?

@Quaintrelle after your post I feel embarrassed writing my less elegant post.
Anyway I didn’t yet finish this game either, but I love it so far. I would go as far that this gets a place on my favorite CoGs list. Nice job, author.

I finished my playthrough have left a nice 5 star review on Google play it was brilliant loved the humor,great plot and great characters well done to the author

One of few games that made me laugh at times. That was most welcome.

On the other end, for there is two - or even three, for counted them I have not - was yet again stats weighing heavier than my persona, coupled with uncertain phrasings as to what path led whereto.

So laughter mixed with frustration, leaving me in befuddled at times.

'twas a sizeable length, though, an aspect I do enjoy with games.

Golly me, it has affected my own writing. Woe is me!

Golly me, it has affected my own writing. Woe is me!

I want to ask if anyone know who’s the RO in this game?

The writing is marvellous, and is it too nerdy to note that I really like the “lackluster/fine” etc notes on the stat chart? It’s a nice straightforward way to supplement the percentage.

Yeah, can you tell us who the ROs are? Or is that something the author wants us to just find out for ourselves in-game?

You’ve asked this in a couple threads a couple times, so let me see if I can help.

First, the author isn’t here on the forum. So they can’t answer you. No, ROs are not a secret, but they’re also not like…usually listed out? Other folks on the forum can’t answer you because it’s a 400,000 word game that came out less than 24 hours ago, so chances are, they haven’t figured out who the ROs are! I can’t answer, as the lead editor because I’ve been working on this and 20 other games and don’t remember. Moargan is one, I believe, maybe Kitty as well? I’m sorry, I don’t remember.

Have you bought the game? Have you tried choosing any flirty sounding options when encountering NPCs? None of the romances appear in the demo of the game.

I don’t think Moargan is one? I think you can only have a fling before you’re sent to the king, unless there’s a way to stay.

I have been pleasantly surprised by this game and the flow and writing. Is easy to read and poems have a eloquence andinternal consistency. the four humours are accurate as the view of the time. I missed certain group dancing of nobles known for being complex and need years to master the opportunity to fool something like that could have been spot on. That is maybe my most criticism is there is not a real portrait of how nobility behaved no hunts and no a real court session in throne room as typical buffoon.

But that’s minor as game has a good variety of options and objectives and choices matter.
So I recommend it to have a good reading and maybe reading it to young kids and explaining them a little history.

When I last reviewed the code, I’m pretty sure the main serious ROs were Tom, Audrey, and Hail. There might be possibilities for flings or similar smaller things with a few other people, and a fair amount of content’s been added since I saw it, so the options might have been expanded overall.

I tried bang M hard no way just a fling lol. I was pure sex appeal and nothing I banging the dancer who i have no odea name and everyone else really lol. In fact i banged 5 people in game i think

Tom, Audrey, Hail and also the Rival because you can have a fling with them and an ending with them when you confess.

Exactly . The confusing part is the flirting and flings with several npcs but that have sense if you’re a court sex idol

Yeah it makes it hard to determine whos a RO with all the available flings lol. I think there might be something more with Moargan because there two achievements for them.