So I’ve been having this problem with Choicescript where it doesn’t seem to recognize my em dashes. 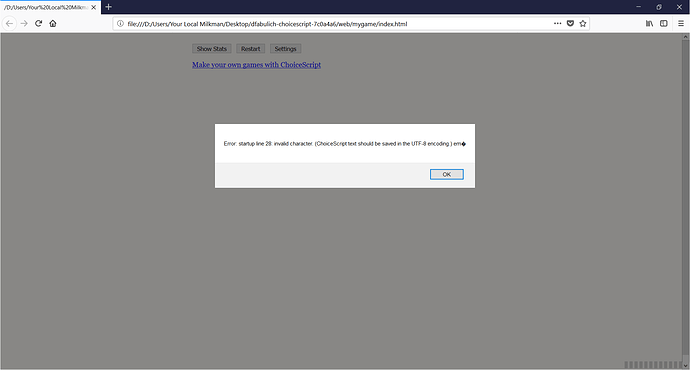 In this case, I had originally typed out “em—dash” in the Choicescript. As you can see at the end of the error box, it doesn’t seem to recognize the em dash I used. Just so you are aware, I use Alt 0151 to input my em dashes, so it’s not me copying and pasting a character I found on the web. As soon as I delete the em dash, the error disappears.

May I ask, what program are you using to code?

By that, I mean the Notepad which comes on a Windows device. I am not using Notepad++.

In that case, when saving your file, select the [UTF-8] under the Encoding drop-down menu, just beside the save button.

Thanks for the help! That seemed to do the trick.

I used many dashes on my own WIP, as well as other shenanigan symbols (dice, arrows, checkboxes).

What I instructed makes your file saved with UTF-8 encoding, which allows more unicode characters to be supported (such as diacriticized chars, symbols, etc.)

p.s. I believe copying the character from web yields the same result as manually inputting it via alt + number