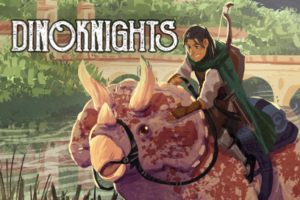 We’re proud to announce that DinoKnights, the latest in our popular “Choice of Games” line of multiple-choice interactive-fiction games, is now available for Steam, Android, and on iOS in the Choice of Games Omnibus app. It’s 40% off until August 30th!

Saddle up to defend the realm on dino-back!

Once a humble farmer’s child, you’ve been accepted into Queen Isobel’s Rangers: brave knights who patrol the kingdom of Pascalia on scaly beasts. But just as you receive your own dino and begin your career as a knight-ranger, you discover evil forces are converging to destroy the Queen, and Pascalia itself.

“DinoKnights” is a 177,000-word interactive fantasy novel by K.T. Bryski, where your choices control the story. It’s entirely text-based—without graphics or sound effects—and fueled by the vast, unstoppable power of your imagination.

Enemies and terrifying foes surround you: but whom should you fear most? The Dread Wizard Sargossa, raising an army of un-dead dragons, or an enemy much closer to the court—the Queen’s own sister, Ermessen? And what about your burgeoning talent for magic? Will you hone your powers to save your village and fight Sargossa? With a dinosaur at your side and sword in hand—the realm’s fate rests on you!

• Play as male, female, or non-binary; gay, straight, or ace.
• Choose one of six different dinosaurs as your steed, including allosaurus, triceratops, and velociraptor!
• Foil a palace coup—or join it, instead!
• Hit the training yard with your dino, or spend your time cozying up to nobles and mages.
• Find love with the royal heir, a charming bard, or a powerful mage!
• Discover your secret, magical heritage.
• Fight to save your own home village from destruction.
• Defend the poorest peasants, or win fame in Royal Tournaments.

Evil is waking, and Pascalia needs you. Will you and your dinosaur answer the call?

We hope you enjoy playing DinoKnights. We encourage you to tell your friends about it, and recommend the game on Facebook, Twitter, Tumblr, and other sites. Don’t forget: our initial download rate determines our ranking on the App Store. The more times you download in the first week, the better our games will rank.

<3 also happy bday to you

I must admit. I’ve already played through about 5 times. The melusine romance was pure genius. Well done on making another good game. PS. Fuck Orton.

Is the game released on iOS ? I launch the app but I don’t see the app

Make sure you have the latest version, that is version 1.3.5. If it’s not appearing for you, try going to the list of updates for the App Store (i.e. in the “App Store” app, there is a button at the bottom that says “Updates”), and pulling the list down to force it to refresh, and if that doesn’t work, try uninstalling and reinstalling.

Is anyone else having an issue with the page format being twice as wide as it should be, as well as page transitions being really slow?

I also couldn’t find it via the app store, but the email link worked.

Well, I guess it was just a glitch. It corrected itself the next time I opened it…weird.

I haven’t finish reading the whole story, but i already loving it and decided to “not rushing it” as i want to enjoy every moment of the adventure by putting my spirit into the world

This is ultimately a fast pace drama adventure without a dull moment thus far , the plot is fun and intense at the same time , there is also a sense of “important destiny” where MC is the heart of every plots and drama… Needless to say, the characters are all intriguing with their distinguish personality and affection

Ummm… i must say that i got the “Mission Impossible” feel in DinoKnights, in which the MC start off as a rookie but being thrown into the action , meeting various characters once graduating as Ranger and like Mission Impossible, intense moments are mix with light hearted , tender and even funny moment along the “mission”

for my interpretation thus far , Princess Beatrice is the opening scene’s Record shop girl (disguised IMF agent) in London who was later killed in “Rogue Nation” , she was naive, charming , cheerful with a hidden intelligent and most importantly was in awe with the protagonist …

after saving her mother, the Queen i chose to comfort Beatrice by guarding her closely, and Beatrice’s reaction was similar to the awe reaction of the record shop agent to Ethan Hunt “It is really you” was the line i can think of coming out from her

Melusine is like White Widow Alanna , calm , enigmatic and held an important role in her own faction

Laila is like Ilsa Faust , roguish , mesmerising and held important intelligence regarding the underworld she seems to know more about the legendary dragons than anyone else , and it is yet unknown whether she is friend or foe …

Mathis is Benji Dunn , funny, introvert and a loyal companion who will be there when we need him, or in this case her?

and Orton , i have a funny feeling he is August Walker/John Lark …i will keep an eye on him

Just a quick thing, but I don’t think the Regime Change Achievement is working, at least on Steam. I put two different individuals on the throne, and nothing triggered. The stats also show 0% completion.

It only appears at two very specific spots in the game. If you have high Queen Danger, and support Ermessen, and the Queen dies in Ch 10, or in Ch 12 if you supported Sargossa and have a high join darkness. Even so, it’s only at two little spots, under a series of tests. Probably not super easy to achieve.

This text will be blurred Is it possible to romance Ermessen? I’ve tried multiple times but I’ve never succeeded

I was wondering, whether there will be a sequel to this game? Because it’s awesome.

Thanks I had the latest version but it didn’t work.
After uninstall ans reinstall it’s ok.

I’ve tried the demo, seem fun, but how many guys there are to romance? I’ve only met the prince and if he is the only man I can romance I would be more than a little sad, since I don’t like him much.

I don’t find any. But like I don’t like the game plot so much I didn’t replay so far seems to believe everyone is into girls or I have bad luck in the gender swap or something. It is a pity because is a very good writing game but the fast paced in the two ends levels and the really really really bad design evil plot is. I hardly doubt anyone tried a evil route in the testing. I was saying continuously i don’t care about people well game continuously say how sad i am and how much i want to save everything… Etc and how evil is automatically a bad ending

According to the description there’s a bard. I am no far off though so I don’t know if the bard is a guy or girl.
But the mage seems to be the girl who we met before we went to the ball. Probably the bard is a guy? Because it seems the Heir is genderflippable.

So far until the demo end the only bard is girl…so the only guy is a spoiled prince who is genderflipped?

very unbalanced in the romance department…

What about the partner?

That is unfortunate. I was planning to pair up my MC with the Heir but the further I read he becoming more annoying.

@The_Lady_Luck
The description doesn’t mention the partner being a RO.

The descriptions often only mention some of the RO’s.
I didn’t romance the partner in my one playthrough so far, but he seemed to be an option.

Have you bought this? I’ll probably wait for confirmation but is there a character development for the Heir?