Congratulations! We are delighted to welcome you back to the Grand Academy for Future Villains, the world’s finest evil preparatory school. It’s sophomore year, and everyone’s bac… 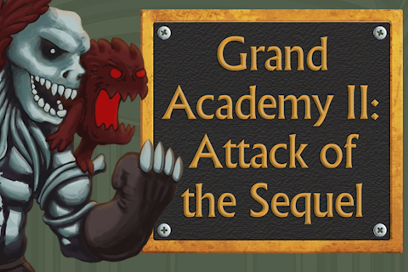 Seize your destiny and vanquish your rivals at the world's finest evil preparatory school! The whole gang is back for a deliciously meta sequel.

How did I miss the first one? Guess I need to catch up!

I love the illicit pet possibilities

I think I have a question, im pretty sure at the end of my playthrough a long time ago, I reformed the school into a hero school if I can remember correctly (its been a long time since I played the first game at launch so memory is a bit fuzzy on it).

If im not just crazy and remembering things wrong, will that at all be addressed or was a canon ending selected already by the writer?

Every ending has been incorporated into the sequel. However, if you played it a long time ago, chances are you played it before a save game option was implemented.

I did. I just read the interview and what the writer said about it after I wrote my question. Not sure how I feel about the thought of that so dont know if it will be my jam, but I hope players are happy with it. Congrats to the author for the first being a success.

Is the princess, or whatever she was, not back for this one?

You do find out what happened to her.

There isn’t really a basis for this happening, except somehow possibly the stats screen not updating quickly enough, sort of? But regardless, I’ve made a change to the code to try to make it go away.

Um it apeard also elsewere than the stat screen

So, this kind of fix, which I just applied to the game wouldn’t manifest itself while you’re still playing the game version in which you found this bug/glitch. You’d have to restart, and you’d likely want to clear your cache.

Wait, so is Phil never coming back? Feels bad man.

Phil appears in Grand Academy II. Remember, the demo is not the whole game…

Omg How could I have been so foolish! Time to hatch an evil scheme to play the first one right in time for the sequel. Yess I can already hear the cities ablaze…i mean…what? Pfft i def meant…crazed…yeah…ok bye

can somepody tell what the stats mean??

Could you be more specific about what you’re asking? A big, open-ended question like this is difficult to answer and can come across as a little demanding, even if that’s not your intention.

In GAFV2 Aspects of Villainy are your skills-personality/type of villain. Paths to Darkness are secondary stats, representing the goals of the game: earning a destiny, leading your genre house, winning the house tournament. Forces to Be Reckoned With represent your relationships.

Congratulations! We are delighted to welcome you back to the Grand Academy for Future Villains, the world's finest evil preparatory school. It's sophomore year, and everyone's back for a deliciously meta sequel. "Grand Academy II: Attack of the Sequel" is a hilarious 215,000-word interactive novel and sequel to "Grand Academy for Future Villains," by Katherine Nehring, where your choices control the story. It's entirely text-based, without graphics or sound effects, and fueled by the vast, unst...