A while ago, we created an official Choice of Games Twitch channel, but haven’t streamed anything, until now!

For our first game, we’ll be streaming The Eagle’s Heir for two hours on June 30th, starting a 1:00 p.m. Pacific Time / 4:00 p.m. Eastern Time. While we plan on adding authors and community members to future streams, for our first stream I’ll be streaming by myself while we work out any oddities we might not have considered. If you’re curious about CoG’s official stream, looking forward to future streams, or just want to support us, come watch for a couple of hours while we start on this new endeavor! 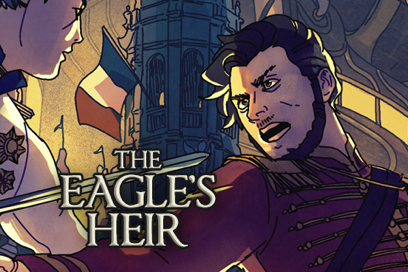 Defend Napoleon's heir in a steampunk game of political maneuvering, airship adventure, and romantic intrigue! Bring liberty to France, or plunge into war?

Bumping this because I’m excited to watch the stream.

What we (I) do going forward depends entirely on if this stream goes well. If a lot of people show up and are enthusiastic, I’ll probably put a lot more effort in making it look/sound good and promote it a bit, while if it’s just me talking to myself for the next two hours because everyone leaves five in I’m throwing it in the ‘never mention it again’ pile.

I, er, just did, so hopefully that’s all right. Wanted to make sure anyone who was wanting to see it wouldn’t miss out.

My popcorn is ready. ™

Edit: That was a cool stream. I’d like to see more of those on a regular basis.

For anyone that missed it.

Thanks for streaming! I’m having so much fun with it—loving your narration, and Eagle’s Heir is such a great game to discuss.

Third time’s a charm. I think I’m actually a little satisfied with how I’ve tweaked the presentation. Now I just have to work on my own presentation. That’s the easy part, right?

Will be with you in 30. Cant watch a stream hungry

Forgot to suggest it before but maybe announce a stream 24, 6 and 1 hour before it starts? To be certain?

Hopping in to wish everyone lots of fun today and few technical issues.
(I won’t join today, not feeling too well, guess I’m getting a summer flu)