It looks like you have a fresh copy of choicescript.

I opened a fresh copy and went to my stats screen.
It should look like this: 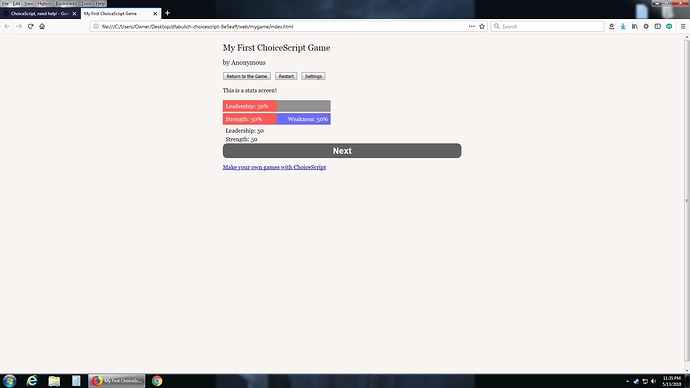 You don’t have a chromebook, do you?

No…
K I’m restarting it

Now it says file not found

Now it says file not found

Oh well thanks for trying to help I really mean that i will try again tomorrow. Good night thanks so much

Using one of the IDE’s makes things a LOT easier!

I usually try to be impartial to what tool people use as everyone has different expectations/preferences and abilities. That said this is exactly why things like Chronicler and the ChoiceScript IDE exist. If you’re finding it difficult to even get started with CS, I recommend giving one of them a try. They both contain internal copies of CS, making them pretty much just ‘plug and play’.

what am i doing wrong?

Thanks, I’ll try it.

It doesn’t work. Do you know where I can get help else where?

Hmm, I’m not sure if what you wrote in your post is exactly how you wrote it in your txt file, but if it is you could consider two things:

Did you indent the variables in the stat chart by 2 spaces?

Best also to keep the upper and lower case in your variables the same in yiur startup and other files. E.g. “Movement” or “movement”. I also dont think you need the “*comment Stats” and “*comment Relationship stats” lines in your startup (the commented out portions of a file do not get seen by readers so i’m not sure if that’s what you intended?)

Haha anyway I’m by no means a hugely exoerienced coder

Can you send the Code in the preformatted text?
Select the code and select </> in the option.

What do you mean by preformatted text?

Select the code and select </> in the option

They told you before, @Moloch… doing it that way will keep the indents displayed, which is the most common source of errors.

My bad I didn’t see your message but as havenstone said do that.