Hi there I still exist despite evidence to the contrary. Some people know me as Apollo if you’re active on tumblr but you might also recognise me from another wip on here by the name of Regrets of the Traitor. That is still on-going and in fact there will be an update later this week. I digress, however.

Due to a need for something other than that project, I’ll be cycling between the two simply because I don’t work well just focusing on one project at a time. Now, onto the story.

You’re a mercenary with a bounty on your head and many secrets to hide, but in a world at war that’s nothing special. The current job should be easy enough; meet your contact, deliver the package, profit, but little do you know that you’re about to meet an old friend. And be pulled back into a past you thought you’d long since forgotten.

It’s a vague synopsis but it’ll do for now until I come up with something better. The genre of the game is fantasy though it’s less of a world-saving game rather than a more personal tale of found family and running from responsibility.

There is already a working demo: https://dashingdon.com/go/4540

This is amazing! I loved Regrets of the Traitor and now I have another WIP of yours to love! Just my luck, too. I was searching for another WIP to read and now I find this fantastic piece of work.

If you don’t mind me asking, are the Lovum humanesque with a few scales or covered with scales entirely? And what about the Cyrdae? It says they have fur and claws. I’m playing the Grim right now, but I think I might end up playing all races.

Howdy! My goodness this is awesome! Ahhh the creativity at play here is just…ahhhhh! The Cyrdae are probably my favorite because of how unique they are. And wearing animal masks is a plus. And hey! I’m all for being a scaled creature! All in all, this was just as awesome if not more so than regrets of the traitor. Stay Coo, alright?

goddammit i’m having flashbacks to Hotarubi no Mori e

I love this so far!

Wow, this is truly amazing! I’m definitely looking forward to more! Not having a human option threw me off a bit because every WiP I’ve read has one, but I was surprised to find that not being a human like I’m used to was better than I thought. The races were well thought out and explained. I especially enjoy the Grims and Cydrae. Your writing was also smooth and kept me interested til the end of the demo. Keep up the amazing work!

Sounds so awsome I will give it a go

If you don’t mind me asking, are the Lovum humanesque with a few scales or covered with scales entirely? And what about the Cyrdae? It says they have fur and claws.

I’m really glad you’re enjoying both of my WIPs! All the races are humanoid. The Lovum do have scales all over their bodies, and they function much like reptiles just in general. As such there is very little sexual dimorphism in the race. Still, they do appear mostly human even despite the scales and such. Cyrdae, while furred and clawed mostly have human features. Their faces mostly have very little fur and their ears are pointed, but other than some fangs and occasionally a tail, they are pretty much just small elves.

I’m glad you’re interested in all of the races, though. In future I will be adding more flavour text based on the chosen race but for now it’ll be fine.

@Pigeon Ahh I’m really glad that people enjoyed the demo so far, even if it is quite short.

goddammit i’m having flashbacks to Hotarubi no Mori e

Oh… Oh no. I am suddenly reminded of it.

@heavens_way_out I understand being a bit confused by the no humans thing but I’m glad I was able to change your mind about it somewhat. I personally have always liked the idea of a game or something of the sort where being human isn’t an option and it plays into the plot as well so.

I enjoyed what you have so far and can’t wait to see where this goes.

yeah do this, or maybe have a “are you sure you’re this race” after the description in an extra page after you make a choice.

also a question from me, is the reflection spirit thing an ro?

Okay I’ll see what I can do about that in the next update.

also a question from me, is the reflection spirit thing an ro?

I really like what I’ve read so far.
I did encounter an error though, which kept me from continuing. chapone line 571: Non-existent variable ‘v_intimacy’

Howdy once more! I am still very much in love with this game.
Alas, I found this lil error here; 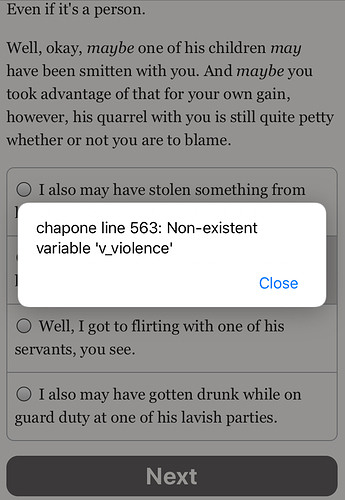 @hilite @Pigeon Both of your problems should be resolved.Sorry for getting back to you really late.

Licking her lips before speaking, the woman gently closes the folder, pushing it to the side. “It is rare to see one such as yourself around these parts,” She begins delicately, not quite looking you in the eyes.

Seems like this section has not been coded properly as the woman refers to mc as three different races. (I chose the trickster species)

No problem! Thanks for the fix.

Okay thanks that should be fixed now!

I love it I hope you’re still continuing the story.

I thoroughly enjoyed this WIP and im looking forward to more have to say love the grim so much already there is just something about being connected to the dead that really pleases me.