Starter chapter for Dawn of a New Era (working title)

Prologue chapter up, definately worth a look, Critical feedback appreciated.

A Work-Camp where you will be forced to construct new fortifications, treated badly, Meet very important people, before fighting a brutal battle on the ground in chapter 2

A conscripted scene, where you will be trained as as one of Four different classes,
Engineer, Squad leader, and Assaulter , each with their own use in the chapter 2’s space-ship battle.

DM me any feedback
Let me know if my writing abilities are sub par!

Later chapters will include;
-Running for your survival as you encounter an ancient enemy.
-Fighting for your survival as 4 different xeno races attack your planet.
-Going to a destroyed tomb world, and destroying the enemy there.
-Joining (or creating depending on your choices) a Knight Charter, or Rebellion.
-A fight for the very survival of that Rebel faction.
-A chance to meet the emperor himself as a coup takes shape.

Later books will include:
Taking over the empire, Installing a new emperor, or a new democratic system.
A fight for the very survival of the universe.

Book 1:
Will see the player rise.

Book 2:
will see the player fight for the empire/rebellion.

Book 3:
is about protecting the newly gained power of the player.

Book 4: Unplanned but not counting it out.

The Demo ends when you see the ‘‘Darkness’’ Page Break,

Do you think I should split the first page (The year is----) Into two separate pages?

Current known Errors:
The Narrator briefly talks as if he was the player for a moment after the initial choice. Ends same page,

In my eyes well written and easily captures the imagination.

The Warhammer is strong in this one, I really liked it, and overhall I’d say it is very promising, and I’m looking towards the updates, good luck and the emperor protects

I get an infinite loading at this part. It ends here? 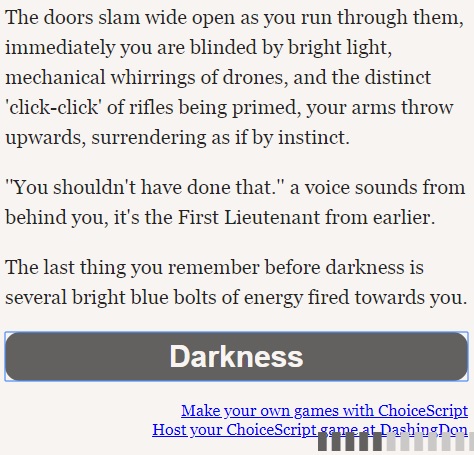 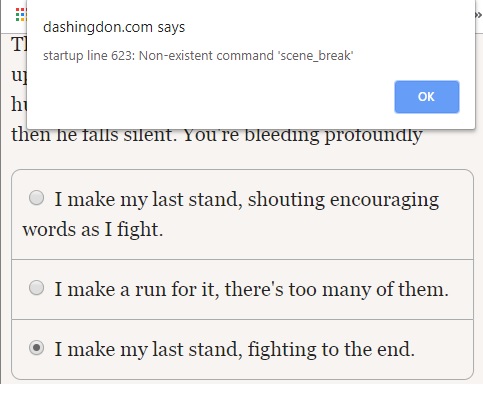 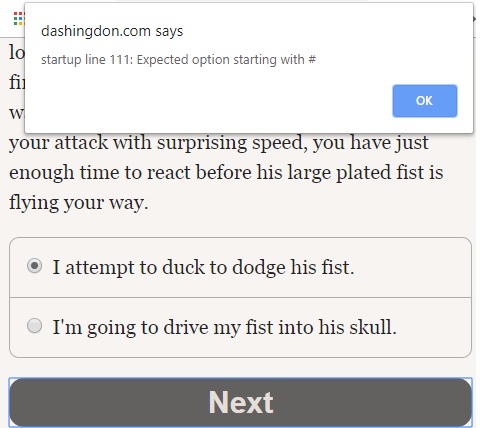 The fight scene was great can’t wait for more.

Could you please add a summary? It helps us to understand what type of genres the story contains and what to expect. I will definitely give the story a try soon. Good luck with the updates.

Thanks for this, I’ve updated to fix the two errors, should work 100% Now.

Yeah the Darkness Page break is the end of the chapter, so you’ve reached the end. Thanks again!

How did you find the story up until then?

I think it has potential to be a very good story. I can’t help but ask if romance will take part in the game? If it did I would be interested in knowing what can we expect

Definately, Romance will be part of the game, I’m unsure how as i’ve kept that as a background thing for now, yet definitely in the later chapters there’ll be two or three scenes for it with referances later in game. Beware however as book one is still EARLY into the story, so beware, some characters may not survive or retain their loyalty up to book 3.

Book 2 is definitely one for romance.

Currently… Eh’ Planned for Prisoner side:
Male:
A gruff, ‘disgraced’ Charter knight.
A young whelp with a hidden background.

For the Military side:
Male:
One Charter Knight Captain
One Squad member ( who may die before you even get a chance. )

Female:
One female Charter Knight Champion
One squad member ( who may die before you even get a chance. )

I found the story very interesting, with a good hook from the beginning and very active. Not in all the stories you have the pleasure of starting a brawl from the first pages… and against the marines!

Fun story behind this;
I had originally intended to write 6 books, 2 sagas, However;
Much better if I put both the sagas into one book, That one choice there is basically:
Menu:
What would you like to play:
Empire of Man: Rebellion.
Empire of Man: Dawn of War. 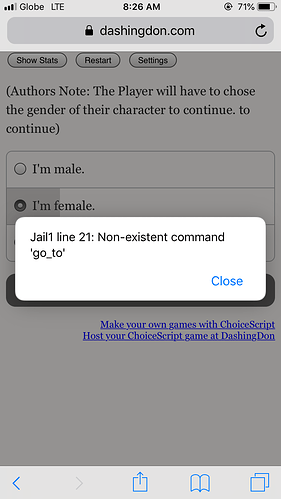 No female route yet?

Non-Existant chapter yet, just uploaded for the sake.

Must say that I’m excited to see where this will be going!
Will keep an eye out for this one!!

I’ve noted alot of you have chosen to fight, why is this?

Have I made it attractive to fight?
IS it because it’s Option #1?

I don’t like arrogant people, and the situation is even worse because I’m chilling at the bar and suddenly two soldiers appear giving orders and being agressive. Someone has to go down. Being honest, I probably wouldn’t do this in real life. But now you have given me opportunity

I guess you’ll be glad to know you have a more ‘passive’ player who took a look at your demo.

That is the main reason I wouldn’t pick ‘get mad and punch a b!’ the first time it appears, but then this also somewhat ties into my perplexed confusion as to why an untrained civilian is being handed a rifle (and what I’m assuming is some sort of augmentation chip) as though they’ll be a crack shot just because they were suddenly conscripted.

To be clear; I see how things went to heck. And even understand that unless these ‘space marines’ break through…something…the evacuation they ordered can’t continue. But conscription or not, I’m not really understanding why they’re handing a weapon to a possible enemy who did have any number of chances to act up before then, as well as any time after who could still become another problem they had to deal with. I just find it a little boggling that they were that ready to trust an unknown (who could be absolutely terrible at wielding any kind of weapon) so quickly.

All that said, I don’t believe you need to change much of anything. Maybe just clarify a few points from a narrative perspective since one side of the conflict seems to be like riding a conveyor belt with not much consideration to the possible background thoughts of a reader who doesn’t know much about the subject matter. I was able to pay attention, and follow the story so far because it is an interesting read with a good hook, but it did pull me out of things a bit… If these doubts I’m having are intended to be dealt with in the next chapter, then they might clear up very easily.

I’ve been staring at this post of mine for the better part of an hour+ dissatisfied with how I’m putting things… It’s difficult to be constructive in a positive way when you’re like me, and don’t know much about the topic.